One of India’s biggest irony and derogatory remark is the Hindu Rate of Growth. Before the famous liberalization, privatization, globalization of India in 1991, the growth had become stagnated to 3.5%. The term enumerated under the economist Raj Krishna, which attributed to the majority Hindu population. The fertility rate was not in tandem with the per-capita income With steep differences from the growth rate of other countries like Asian countries, it was connoted with pre-determinism, acceptance and sense of satisfaction, to underestimate and belittle Indian growth scenario. The supposedly misguided socialism, emerging corruption and paranoia from another foreign invasion made the country opaque to reforms. Indian fatalism and policy of contentment was the bone of contention in the actual fast-track growth of economy.

Completely misled for being related to religion, a distinguished politician and journalist Arun Shourie busted the truth that the Hindu Rate of Growth has nothing to do with Hinduism and it’s orthodoxy particularly, rather it was referring to the narrow policies implemented by the secular governments.

Such situation emerged again in the year 2013 when the growth stuck to 4.8% and the dream of double-digit growth took a harsh brake. The Central Statistics Office was putting the rate lower than the roughly estimated 5%, which was lowest since 2002-03. 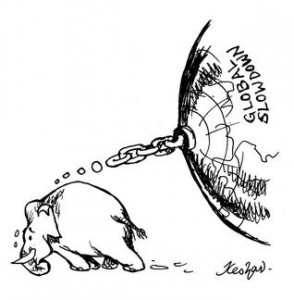 India is now a fast growing economy with global presence in petrochemicals, information technology, services, pharmaceuticals, research and development, space science, agriculture, bilateral trade and many such parameters.
However, the factors that still hurt Indian development are:

Land Acquisition Policies– The LARR Act by NDA government has failed to become a law, given it’s strict and hegemonic clauses. If passes with transformations , the problem of land for developmental projects can be solved forever.

Labour Laws– The obsolete labour laws of the country needs to be revamped and put in parallel status with the current economic framework.

READ MORE  11 MANLIEST and AWESOME lines ever uttered in real.

Power– Even though equipped with extravagant resources, the pusillanimous attitude of Indian policy makers, executives and bureaucrats have made India a laggard and major energy exporter. With burgeoning population and innumerable challenges, Indian subcontinent needs to pace with the world in developing new technology.

Education– Ranking low in the education quotient, India must increase the share of GDP in education sector more than smart cities and digital infrastructure. Unless education becomes ubiquitous, there is no use of populist measures. Indian universities needs to leverage it’s tremendous potential and monumental talent edge.