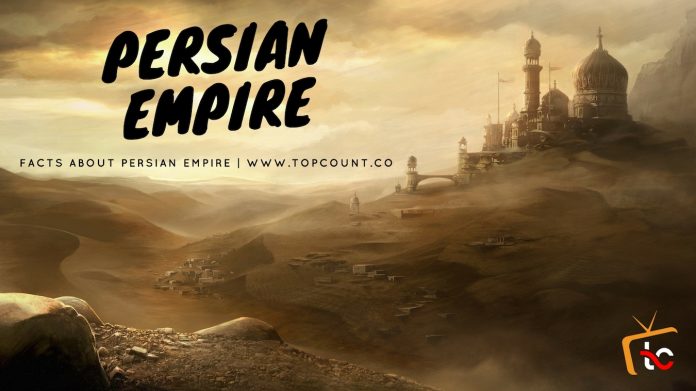 The Persian empire was one of the greatest to ever exist. Here are 9 Persian Empire facts to prove this:

In order to boost trade between Egypt and the Persian Gulf, Darius-I ordered the construction of a canal linking the Nile and the Red Sea. In fact, this predecessor of the Suez Canal had been started in around 600 BC by the Egyptian pharaoh Necho, but it was abandoned when only half completed. Darius’ workers began completing the canal in about 500 BC and finished the job a few years later, setting up why five inscribed stelae – stone slabs – of which four survive.

Darius’ canal – which ran along a course similar to the modern Suez Canal, from the Nile Delta through the Bitter Lakes to near the port of Suez – remained in more or less regular use until the 8th century AD.

The English word ‘magic’ comes originally from the Magi, a mysterious Persian priestly clan. A Magus was a person wise in religious matters, and the Magi were probably also scribes and keepers of records. The word magic may have acquired its modern meaning from a branch of the clan which moved to Babylonia and specialised in telling fortunes and working religious ‘wonders’. It was three of the Persian Magi, “wise men from the east”, whose journey to visit the infant Christ is described in St. Matthew’s Gospel.

One of the main religions in ancient Persia was the cult of Mithras, who was generally portrayed as a man slaying a bull. It was a men-only religion, and several of the ceremonies had parallels with those of Christianity, including baptism with water and the sharing of a sacramental meal. Mithraism later spread to the West and, because of its emphasis on the warrior’s virtues of strength and courage, became particularly popular among Roman soldiers.

READ MORE  3 Forms of Yoga to keep you fit and Forever Young!

The Persian kings had many wives, and even more concubines, kept in a harem guarded by eunuchs. After Cyrus subdued Babylonia in 539 BC, the province had to supply already castrated boys each year to learn their trade as eunuchs. Probably none of the Kings had more wives and concubines than Xerxes I, who reigned from 486 to 465 BC and who appears as the amorous King Ahasuerus (the Hebrew version of the name) in the Old Testament book of Esther. It was said that that his harem had as many women in it as there were days in the year.

When the Persian king, Xerxes I, led an expedition against Greece in 480 BC, he had some of his Egyptian and Phoenician engineers throw two pontoon bridges across the narrow Hellespont Strait to carry his armies over. But a storm wrecked the bridges – and in a fury, Xerxes ordered his men to give the Hellespont 300 lashes and to throw a symbolic pair or shackles into the waves. Some accounts say he also had the waters branded with hot irons to show his displeasure. The engineers were beheaded as well. Their successors, however, kept their heads because the weather improved and the Persians were able to cross safely. At first the invasion was successful. But after a crushing naval defeat at the Battle of Salamis later that year, Xerxes had to withdraw from Greece.

Cyrus the Great’s son, Cambyses, was a hard drinking man of violent rages. He was also find of asking people what he thought of him. It was a question that could cost an undiplomatic vassal his life. But the Greek historian Herodotus, writing in the 5th century BC, reported that at least one courtier, faced with this dangerous question, found a life saving reply. The courtier is said to have told the king: “I do not think you are equal to your father; for you do not have the son like the son he left behind him in yourself.”

7. Flames Over The Palace

A hall which could hold 10,000 people was a central feature of Persepolis, the enormous Palace complex built by Darius I in what is now southern Iran. Yet the roof of the hall was supported only by only 36 pillars. The secret: the roof was made of huge cedar beams from Lebanon, which could support a larger span than was possible with stones. Persepolis – a name that also came to be applied to the city which grew up around the palace – is a corruption of the Greek name for that palace, “Perceptolis”.
The Persians themselves called the palace complex Parsa, after the surrounding province, which was the true Persian homeland. Darius began Persepolis in about 520 BC, and his successors completed it. It remained intact for less than two centuries, however. The wooden palace was burnt to the ground by the invading troops of Alexander the Great in 331 BC.

READ MORE  Shocking Eating Habits Of These Celebrities Will Leave You Stunned!

The only word ‘paradise’ comes from an old Persian word for a pleasure garden or a deer park. Not only the king had such gardens: many of the provincial governors, known as satraps, had them too.

The Persian Empire reached its greatest extent under Darius I, who siezed the throne in 522 BC. It stretched about 4000 km (2500 miles) from the River Indus in present-day Pakistan to what is now Benghazi in Libya in the west, and the Arabian Sea in the south to the Caucasus and Macedonia in the north. This, the first of the so-called ‘world empires’, covered about 5,000,000 km² (almost 2,000,000 square miles) and had a population of 10,000,000.