The phone is actually a slightly smaller version of the iPhone 7 Plus that runs Android in place of the iOS. On the very first sight, each and every physical aspect and feature of this phone will be strikingly familiar to the regular iPhone users or even the people who have at least used an iPhone 7 Plus: ranging from the curved antenna lines on the top which are literally the same followed by a the dual-camera module on the rear that looks strikingly, microphone, and LED flash on the back are in the exact same positions. In addition to this, the power button and the volume rocker are also placed in a very similar or exact fashion as they are on the iPhone. Similar is the case around the front part of the phone, the selfie camera is in the same position as it is placed on the iPhone 7 Plus, the bezels again are strikingly almost identical. The only difference that I could find was in the home button shape. Like Apple, the home button serves as the fingerprint scanner. The less expensive variant of the OnePlus 5 also comes in Space Slate Gray. The one and only way only way the OnePlus 5 has spared the iPhone in terms of plagiarising the idea is by negating the use of USB headphone port in place of the normal, routine 3.5 mm headphone jack. Thank god, Oneplus has spared that idea.

Nevertheless, those smart antenna lines were first introduced by the Chinese brand Meizu and not Apple;iPhone’s universal placement of the home button on the front below the screen is without any choice as the tech giants prefer a physical key that can function as a fingerprint sensor as well as performing other simple tasks. Overall, the Oneplus 5’s design looks outstanding and is very much elegant and looks rich and feels classy and comfy in hand. 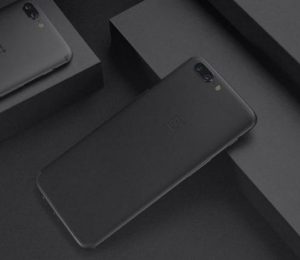 In terms of design, the Oneplus surely outclasses the other phones in the price bracket, but talking about its competition with the flagships like the Galaxy S8 and the LG G6, it lacks behind in terms of almost anything. But given the huge price difference, I would give the benefit of doubt to the evolving company. It is surely a large phone to handle, but it doesn’t feel hard to use it with one hand. The top of the screen isn’t out of reach and can be reached easily by the regular big screen users as well as the newbies in the field. The Oneplus 5 has done a great job in putting up a phone with a good, decent display if the features like infinity display and a bezel-less display are to be neglected. The current trend followed by Samsung, LG and Xiaomi did make the fans expect a bezel-less display and also a QHD resolution would have been far better for this price bracket. Nonetheless, the phone coupled with a massive 8 gigs of RAM and only 1080p resolution for it to power, the phone can be considered to be the smoothest of all, even the most expensive flagships could be outclassed with it’s performance. It gets the most out of Android with it’s sleek and smooth transitioned performances.

Though as far as the feel in the hand is concerned, I suppose the company should have put a more a gripping element on the rear of the phone on it’s matte black variant.

The company has put the exact bit of what is needed out f its buttons in terms of responses. The home button and fingerprint sensor are merged in a single button on the front, just like the Oneplus 3 and 3T. The sensor is lightning fast with a response time of 0.2s and is strikingly accurate in terms of recognising the fingerprints.

So is the case with other responses. I never seem to mess up the double tap the t\home button for camera and its other features. Though the loudspeakers aren’t making me its fan anytime soon. The loud speakers seem to be very high pitch when taken to moderately high volumes. But the call quality and clarity on the phone is very good and I personally think the company has done a great job in putting up a phone which is a beast in terms of performance.

Honestly speaking, if Oneplus were to offer the Oneplus 5 at $399, the same price as the Oneplus 3, there would have had been no issues at all considering the price bracket and the design flaws and plagiarism could be neglected. But as it is competing on a higher price range, nearly to the Samsung Galaxy S8, it is normal for us to expect at least some improvements like replacing its conventional 1080p OLED display with the at least a QHD display. I would rather spend a bit more and buy the Galaxy S8 with its bezel-less display and infinity display to have a better worth of my money.

In terms of camera, the company has again made a look alike of the iPhone 7 Plus. The company has copied the design and the placement of the camera on the rear as well as on the front. The camera also features the Apple’s most beloved feature i.e. ” the portrait mode”. The Oneplus company has used higher-resolution Sony sensors: a 16-megapixel IMX398 (the same one that Sony developed especially for OnePlus’ sort-of sibling company Oppo) with a wide-angle f/1.7 lens, and, closer to the middle of the phone, a 20-megapixel IMX350 with an f/2.6 telephoto lens. And yes, the 5 also has a portrait mode that simulates bokeh around the subject of the picture, re-creating the shallow depth-of-field effect of large-sensor DSLR cameras.

The only lacking point of the Oneplus 5 is its lack of OIS i.e. Optical Image Stabilisation. The company would find itself giving an excuse that its extra-wide aperture and electronic stabilization makes the OIS superfluous but the only phone i seemed to have experience it with is the Google Pixel. So far I have found its camera to be the best till date, only uptil now when the likes of Galaxy S8 and LG G6 and including the iPhone 7 are just coming nearer to its quality offered by the Google Pixel.

The depth effect or in other words the “portrait mode” on the phone is not up to the marks and far from Apple’s iPhone 7 Plus feature. The portrait mode is the lacks to detect the required depth effect and he background objects unlike the iPhone 7 Plus which does a great job in this department. A reason behind it could be Oneplus 5’s lack of Optical Image Stabilisation on both its rear cameras. Furthermore, unlike Apple, Oneplus decided to ship the product with the newly launched feature as soon as possible whereas Apple delayed the launch of its iPhone 7 Plus after its announcement to make the necessary algorithm changes to enhance its depth effect.

On the hardware front the Oneplus 5 is the ultimate winner, even against the likes of the flagship phones in the Samsung Galaxy S8 as well as the LG G6. The phone is lightning fast in between the transitions and the animations too are buttery smooth. It is like the speed limit is removed off the Samsung Galaxy S8. The S8 suffers in terms of the extra added animations due to the company’s newly and beautifully customised TouchWiz UI . But the younger company in Oneplus has opted for minimalism and speed rather than beauty in animations. The phone is a beast in itself and runs a pure Android version of Nougat, 7.1.2 on the company’s Oxygen OS with some minimal yet useful tweaks.

The phone installs the apps at a speed never seen before and all thanks to the newly used UFS 2.1 storage. All this coupled with 8 gigs of RAM and a newly launched and latest Snapdragon 835 processor, I bet you won’t ever experience a lag in its performance even at the heaviest of the usage. It brings all things possible out of Android at your feet.

In terms of charging the Oneplus has maintained its motto of “speed first” in that case as well. With the support of dash charging, which debuted on the Oneplus 3, the Oneplus charged from approx. 9% to 75% in under  30 mins time. The only downfall of this is that the Oneplus dash charge can not be compensated for the use of Snapdragon’s quick charge support. You need to have a Oneplus qualified charger and a USB cable to make the use of Oneplus’ dash charge feature which comes as very big blow for the users who prefer to have a USB type-c  charger both the laptop and the mobile.

In addition to the massive 8 gigs of RAM and an ecstatic storage coupled with the latest and most powerful Snapdragon 835 chipset, the Oneplus 5 also brings forth the Bluetooth 5 with AptX HD support.

The Oneplus 5 does a seemingly great job in terms of delivering the complete package of performance a user desires to have from an Android phone at such a high price bracket. The phone does handle any heaviest of the tasks one can possibly throw to it. The multi-tasking is simply awesome and the design and build quality is completely elegant and rich in class and look. The matte black finish is all you need at the end of the day for a rich and classy look addition to yourself at the end of the day. Though the Oneplus has plagiarised the design of the Apple iPhone 7 Plus, I am sure the people would probably shrug off this mistake made by the evolving company and would surely rather opt to immerse themselves in enjoying the Android at a speed they have never experienced it ever before. OnePlus 5 is surely worth a buy if you are ready to compromise a bit on the camera aspects of the phone , which I think is a temporary case as future software updates would surely bring the best out of the camera as was the case with Apple’s iPhone 7 Plus at its launch. It is surely worth your money.