The Greek diplomat Megasthenes, who visited the Maurya capital Pataliputra, is an important source of Maurya history. Mouryan dynasty has united India ( covered almost present India expect some part of southern region). India has experienced great rulers with outstanding administration during this era.

Chandra Gupta under the guidance of Chanakya ( militant Bramhin) defeated Dhana nanda and conquered the empire. Pataliputra was the capital of Mouryan empire.

There were many theories regarding origina of Chandra Gupta but according to Chanakya he considered himself as protector of region from a dharma king nanda by helping Chandra Gupta to conquer.

The first wife of Chandragupta Maurya was Durdhara. She is believed to be his eldest maternal uncle’s daughter who came along with him in Patliaputra and even supported him in his struggle against the King Dhana Nanda. 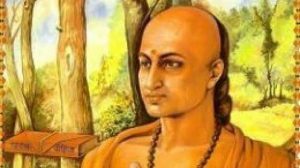 literature of the Maurya period was composed either in Sanskrit or Prakrit or Pali languages. Megasthenes Indica was source literature evident of this period.

Kautilya (chanakya) was the Prime Minister of Chandragupta Maurya. Chandragupta found the Mauryan Empire with his help. Arthashastra was written by him.  Arthashastra is a book on political economy and the art of government. It is the most important source for writing the history of the Mauryas and is divided into 15 adhikarnas or sections and 180 Prakaranas or subdivi­sions. It has about 6,000 slokas.

Mouryans were renowned for their administration. Chandra Gupta was most influenced by chanakya.

Mouryan dynasty has united India. The administration of Mauryan Empire was decentralized and the administrative powers were divided into convenient administrative units. Mouryans divided kingdom into janapadas. The Maurya emperor directly ruled the central and Eastern part of the empire, whereas the other areas were ruled by the provincial Governors.

The Mauryan King had to depend on the council of ministers for the success of the Mauryan administration. The Council of Ministers of Mauryan Empire were known as the Mantri Parishad.

Mauryans have good administration network and Chandra Gupta is particular about revenue and treasury.

Chandragupta became an follower of Jainism in his later years. He renounced his throne voluntarily. He followed Digambara monks led by Bhadrabahu to south India. He is said to have lived as an ascetic at Shravanabelagola for several years . He took his last breath in she’s van a be lavolta which is present in Karnataka today. It is believed that you can see footsteps of Chandra Gupta there.

His son Bindusara ruled the kingdom after him.He was the only son of Chandra Gupta. Bindusara also took Jainism in his later life . Ashoka , the great, was son of Bindusara who was famous emporer after Chandra Gupta.

READ MORE  How to Switch From Smoking to Vaping Easily