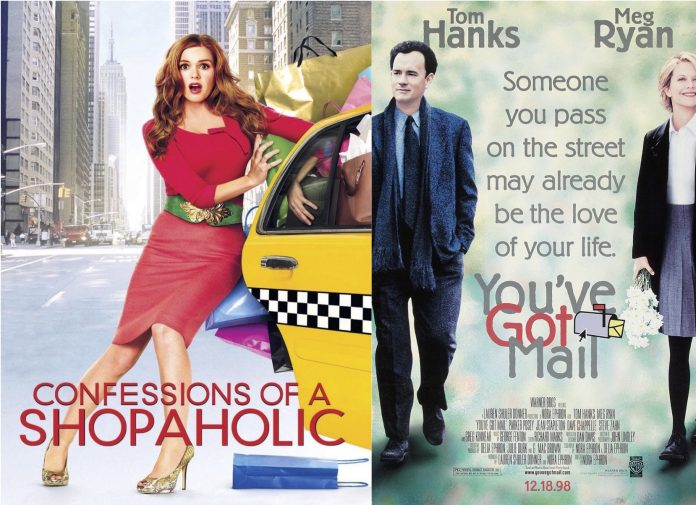 2 months vacation time has already started for many of you! That means sleepovers and long nights. And binge watching movies.

Here are 9 romantic comedy movie to binge watch for a perfect sleepover.

1. Confessions of a Shopaholic

This movie is based on the popular novel, “confessions of a shopaholic” by Sophie Kinsela. But it isn’t the same as the book. It’s even better. This movie follows the shopping adventures of Rebecca Bloomwood, a person with shopping addiction. She shops when she is happy, sad, excited  or depressed. Rebecca is a compulsive shopper and wants to join a fashion magazine called Alete by Dante West. However her dreams are shattered when her place is filled by Alicia. But not all hope is lost as she gets a job at successful savings, another magazine of Dante West. She first struggles a bit to write articles but soon relates it too herself and signs it as “the girl in the green scarf”. What she didn’t anticipate is her articles becoming really popular. Her own mother tells her to take advice from the girl in the green scarf. But will she take this advice and get herself out of debt?

2. While You Were Sleeping

This hilarious movie features my favourite Sandra Bullock. She has been having a crush on a man she sees everyday and one day he happens to fall down and get a head injury in front of her. She quickly saves him by taking him to the hospital but is not allowed inside his room as she is no family to him. Hence the lying begins. With a simple “I am his fiance”, the guys family and the man himself are lead to believe that he suffers from amnesia. All is going well till she starts falling for her crush’s brother!

A perfect bridesmaid. That is what Jane always was. She always took care of others and forgot about herself. She is in love with her boss who just “appreciates” her. However it all changes when her sister and her boss George and getting married and she has to plan their wedding! Kevin comes along and things things take a turn when the goody two shoes Jane won’t stand by and see life pass by.

Andrew, Ryan Reynolds, works as a secretory at a really famous firm to the best editor Margret, Sandra Bullocks. Margret is called a “witch” because of her scary nature. Andrew’s family tells him to quit his job everyday. But one day Margret is about to get deported back to Canada when her eyes land on her secretary. “We are getting married.” They say at the immigration office. And to prove their point, both of them head to Alaska to celebrate Andrew’s Granny’s 90th birthday. Will this weekend would change Andrew and Margret’s feeling towards each other?

A clumsy 31 year old decides to turn her life around when she hears Mark speak ill about her to his mother. She stops fantasising about her boss and actually starts flirting with him. She starts going out with her womaniser boss and finds out that Daniel and Mark were actually friends before someone slept with someone’s fiance. Soon she finds Daniel cheating on her and cuts all ties with him. Soon she finds out that Mark was not all that bad as she had wrote him in her diary!

This amazing movie is so hilarious and entertaining. It stars Sandra Bullock as Lucy and Hugh Grant as George Wade. George Wade is the owner of a really big company while Lucy believes in fighting for a community home and for people’s rights. However things change when she is hired to work for George Wade but instead of using her professional skills, George Wade treats her like a nanny asking her which mattress is better, which tie is better, what to statements to give the newspaper, etc.. Along the way the two of them start caring for each other but will the community house still be safe? Is George Wade ready to give up what he has for Lucy?

Julia Roberts and Hugh Grant are the main actors in the movie. An ordinary boy is walking down the street with a drink in hand when he bumps into a woman and splashes all the drink on her front. He invites her home to change and she gladly accepts. What is shocking though is the fact that this woman is none other than Anna Scott, the world’s most famous actor. William and Anna start dating but will their relationship be able to survive with the paparazzi on the always Notting hill and everyone where Scott introduces Anna as his girlfriend they only gets gasps? But as Anna says, “I’m just a girl, standing in front of a boy, asking him to love her”.

This beautiful movie stars Meg Ryan as Kathleen and Tom Hanks as Joe. They meet online through email and start their correspondence with each other. They have really started to like each other. In reality Kathleen is a book shop owner called “the shop around the corner” while Joe owns a really big book store called Fox Books. Fox books is costing the Shop around the corner it’s business. What will happen when Joe figures out that “shopgirl” the person he emails is actually Kathleen, his business rival. How will Kathleen react to this information? Will their love conquer all?

9. The Prince and Me

Prince Edward of Denmark travels to US to join college and meet hot sorority girls. What he doesn’t expect is to fall in love with Paige, a medical student. However things turn weird when paparazzi arrive on campus and Paige finds out that Eddie is actually Prince Edward. Will she leave all her dreams to go and stay with Edward in Denmark or leave him? This movie is really funny and it has many sequels which are very hilarious too!

READ MORE  5 Movies Where Shahrukh Khan Was a Villain