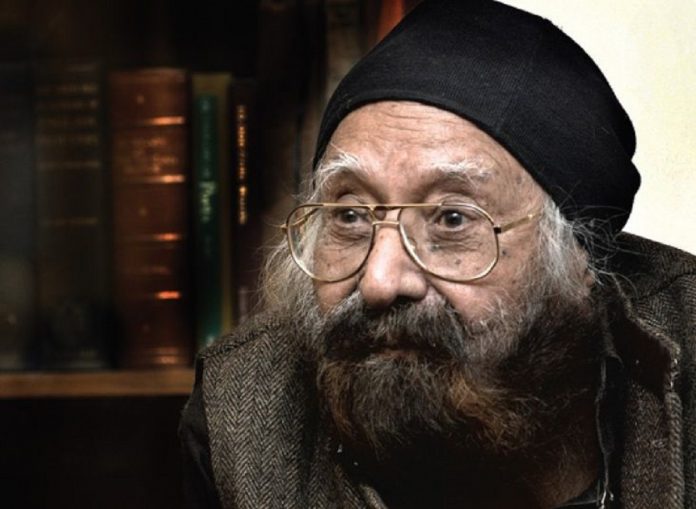 The world of Indian literature, journalism, and scholarship are poorer without Khushwant Singh, who passed away in his beloved city of Delhi, aged 99. A prolific author of irreverent but highly insightful articles, novels, stories, history books, poems and essays, perhaps the first Indian who chose writing as a career and went to make a princely living out of it, poetry lover, accomplished raconteur and unfathomable repository of bawdy jokes, Singh was a byword for honesty and wit, a touchstone for all aspiring Indian writers.

Khushwant Singh was that rare breed in whom European modernism and liberalism combined creatively with Hindustani and Hindu-Muslim syncretism. Unlike many influential people of his generation whose lives extended on both sides of the country’s independence, Khushwant Singh remained uncorrupted by political ideology and communalism.

“The consciousness of the bad is an essential prerequisite to the promotion of God.“

“Morality is a matter of money. Poor people cannot afford to have morals. So they have a religion.“

“Your principle should be to see everything and say nothing. The world changes so rapidly that if you want to get on you cannot afford to align yourself with any person or point of view.“

“But big people’s illnesses are always made to sound big. The simple shutting and opening of the royal arse-hole were made to sound as if the world was coming to an end.“

“Sage! The stomach is the prison house of wind, the sagacious contain it not in captivity, for the wind in the stomach is like a stone on the heart.“

“Never underestimate anyone around you. Everyone has the power to surprise anyone at any point in time.“

A young Khushwant lived off his father’s bounty heartily, in undivided India and London and other locations in Europe, getting himself a liberal education more outside than inside campus. A stab at law led to a stint in Indian Foreign Service, but the compulsions of sensation, liquor, flesh, and candid expression are said to have occupied the mind of burly Sardar to such an extent that the country got to see little by way of a lawyer or diplomat. In the mid-1950s, Khushwant took to writing stories and articles and, as he tells us famously, succeeded as a writer when he had failed everywhere else. The story Mark of Vishnu first established his name as a fearless mocker of religious superstition and communalism.

Train to Pakistan followed, and here we have the weight of felt experience and sharp straight prose. The novel is about the trauma of Partition and communal violence and the destruction of communities and friendships. It is critical of the government and condemns the manipulation of the underprivileged and ignorant by the rich and powerful, a constant theme in all the writings. In the 1970s, Singh piloted The Illustrated Weekly of India to high circulation, using its columns to support the coercive methods of Sanjay Gandhi and the disciplinarian objectives of Indira Gandhi during the infamous Emergency.

Later, Singh edited the Hindustan Times, published a multi-volume history of the Sikh people and the reign of Ranjit Singh, received the Padma Shri and got nominated to the Rajya Sabha, returned the honor in protest against Operation Blue Star, risked his life by criticizing the blood-thirsty Khalistan militant Bhindranwale, wrote more and more novels, stories, and articles, invited ever more admiration and scorn by cracking unprintable jokes at everybody’s expense, including his own. Interestingly, he was awarded Padma Vibhushan and kept flaunting endearingly his love of whiskey and lust for women. No signs of hypocrisy there: the distinguishing mark of Khushwant Singh!

Singh cultivated a persona of the earthly Sikh who cannot do without his daily quota of whiskey and sex. The whiskey he had in moderation of every day, but his gleefully flaunted obsession with sex, Khushwant Singh resembled Vatsyayana, the celibate sage who wrote the famous Kamasutra. One is not too sure that Khushwant had to endure celibacy, or that he did not land in a fair share of romps, but he remained committed to his wife for life and never attracted dishonorable mention.

Khushwant Singh is a higher mortal known for his transparent honesty and delightful contradictions. Known for his witty humor, when asked why he was ever produced as a writer, he replied: “No one has invented a condom for pen yet.”

One of India’s best-known authors and journalists, who elevated English writing in India with uninhibited wit and humor and was equally facile with his pen on serious issues such as partition in his classic Train to Pakistan, remains in our minds as a prolific author. He was awarded the Padma Bhushan in 1974 and Padma Vibhushan in 2007 and founded as well as edited the Planning Commission’s journal Yojana. His literary works include Train to Pakistan, I Shall Not Hear the Nightingale, Delhi:  A Novel and his autobiography Truth, Love and a Little Malice, which was published by Penguin Books in 2002.