For almost a decade, Taylor Swift has managed to weave us an intricate narrative of her innocence and purity and those seem to be the pillars of her brand as an artist. She’s the singer songwriter who sang us fairy tales and in her early days would only be seen in ball gowns and dresses. But here’s the thing about her, Taylor Swift is anything but innocent. In her own words, she’s been the victim of the cruel ways that all her ex-lovers treated her and how she didn’t deserve that at all, but in actuality there’s more to Taylor that meets the eye…

She told us this charming, heartbreaking, melodramatic story through her music and we all fell prey to it because why not? It’s magnificent to look at! But that’s how she messed with her audiences brains, through relatable melodrama. She might be passive about anything that actually matters but she spoke out about her relationships and how they only hurt her very openly. But here’s the thing, there have been times Taylor’s flip side was right in front of the world but they chose to ignore it, because she compelled the hell out of you to believe her.

1. How it’s never her fault

Now here’s the thing, I’m okay with her literally naming her boyfriends (for example: John Mayer, Dear John; Joe Jonas, SNL monologue and The Ellen show in 2008; Harry Styles, Style) in sadly narrated, break-up songs and tearing them down in the public eye as adulterers and cheaters. But what’s hard to believe is that every single relationship she’s ever been in came undone because of the boy. Don’t you get it? It’s never her fault! 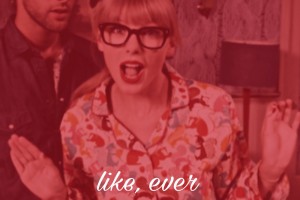 In reality, there are always two narratives, two sides to the story. The media and the masses believe what Taylor, the superstar tells them via her rather amazing songwriting skills. There’s never been one song where she mentions anything about it being her fault which honestly would just make her perfect (and the victim) but that’s hard to believe, so I’d like to think Taylor just chooses to keep that part out of the conversation so to keep up her “good girl” image, stressing again that being a victim of heartbreak and a said good girl are both pillars supporting her career.

2. When she spelled out her reality (But you still failed to realize)

So this is back in 2008, Taylor was just this new girl who could write amazing lyrics and always sang with a guitar, call her fetus Taylor if you may. But even that early in her career, fetus Taylor, recently broken-hearted at the hands of Camp Rock fame, Joe Jonas, over a rather short phone call, managed to pen down a hate letter, not to him, but to the girl who apparently “stole” him away from her. 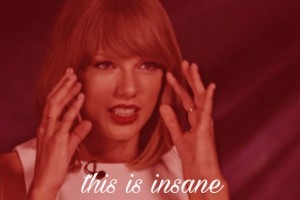 Enter Camilla Belle who’s romance with Joe started soon after his break up with T Swift. An actress by occupation, Camilla was bound to feel harassed and humiliated with the song “Better than Revenge”. It was supposedly, about a girl who stole toys on the playground but Taylor is quick to mention that it won’t make her any friends. She later went full on mean girl and sang “she’s not a saint and she’s not what you think, she’s an actress, she’s better known by the things that she does on the mattress,” Well that was a low blow Taylor, a low, slut-shaming, occupation-shaming, blow.

In an interview with Billboard in 2012, when Taylor was asked if she was a feminist, this was her reply “I don’t really think about things as guys versus girls, I never have. I was raised by parents who brought me up to think if your work as hard as guys, you can go far in life” Is she talking about equality? Yes. Does she know that that’s what feminism is about? undoubtedly, no.

So after she practically denied being a feminist, which she had a totally sad knowledge about, she realized in 2014 (through Lena Dunham, funnily enough) that she wanted to be in this imploding scene of feminism so she announced herself a feminist *cue applause*. Now let’s take a look at what Taylor has done as a feminist…

One, she managed to gather up an all-white, all unrealistic body standards, all celeb and all girl ‘squad’ which occasionally hung together at parties and showed up to her concerts for support.

Two, She also managed to donate to Kesha secretively over her ongoing lawsuit against Dr. Luke, which Demi Lovato, FYI slammed her for, saying “Take something to Capitol Hill or actually speak out about something and then I’ll be impressed” 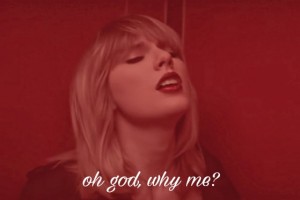 Demi didn’t just stop there, she followed it by writing, “Not everyone has 250k to just give to people. Would love to but I didn’t grow up with money and def haven’t made as much as her. At least I speak up about shit that’s uncomfortable to talk about rather than trying to be politically correct 24/7. I just give more fucks than other people and would rather start a dialogue ABOUT WOMEN COMING FORWARD ABOUT BEING RAPED than throw money at one person.”

And that’s it, the empowering list ends. Passive Taylor continues to not make use of her giant following for any good at all.

4. The Bad Blood with Katy

Katy Perry and Swizzle T used to be friends until Katy allegedly ‘stole’ all of Taylor’s backup dancers and ‘became enemies’, a pity thing to become enemies about though. Taylor stepped up her pointing-fingers game and assigned her BFF Selena Gomez the duty to act as a doppelganger to Katy in her Bad Blood Music video. The video showed Taylor and her squad fighting against ‘Katy’ and literally starting a war. 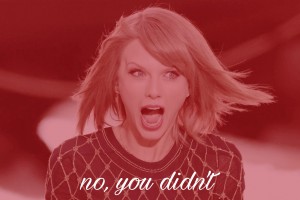 Taylor’s then recent ex, called her out of social media and though she was “only looking for someone to bury like Katy” (confirmation, ding ding!) which only exposed her further.

Now you see, celebrities aren’t always like they make us believe. Mind you, they have a whole team dedicated just to building a fake image, but it’s important we see them for who they really are. Hope the tea was piping hot and your tongue it burnt.