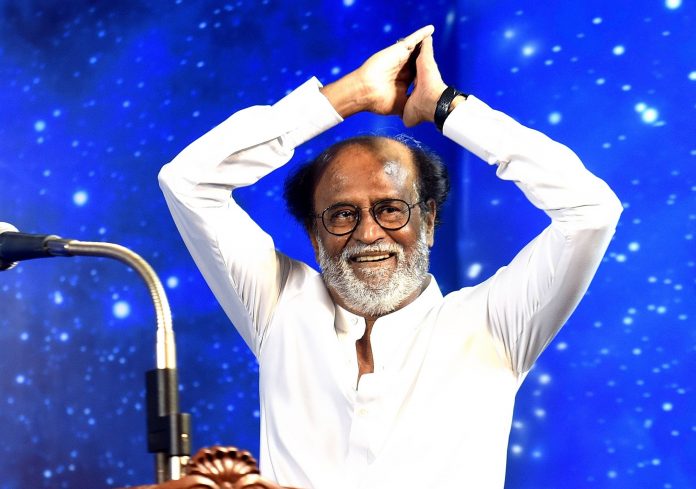 Rajinikanth first political speech made the crowd energised and paved his entry into politics.The Superstar after gaining his fair share of stardom in his film career has now taken a step forward to enter into politics. Rajinikanth has a huge fan following when it comes to his films especially his Acting style which has been imbibed and portrayed by many other actors on screen.

He is still actively working in the industry with his last major movies that were Kabali and Robot had been a commercial success in India and overseas. His latest teaser Kaala had released two days back with fans going all crazy about his new look.

Looking at the right time he had initiated a few days ago that he would be joining politics as he felt it was the right time to do so. He had made it huge by giving his first Speech yesterday. Rajinikanth first political speech made the people believe what was right, as this was his first public address to the people since he had just got into politics. The actor earlier in the day had inaugurated a statue of former Tamil Nadu CM (MG Ramachandra) at the location of Dr MGR Educational and Research Institute in Chennai.

The venue had been completely jam pack with students and fans of over 5000, where he also volunteers to take few questions from them. On December 31, it was announced that Rajinikanth political party would be soon launched and contest in all 234 assembly constituencies in Tamil Nadu. He had also stated that he would launch his party after the elections are announced in the state. Whether he would take part in the Lok Sabha polls he told he would take a call on that later.

Rajinikanth’s Speech to the Students

Rajinikanth politics latest news: The Superstar Rajinikanth first political speech had a lot to convey to the students where he stated that College life is one of the happiest and fun frolic days one can ever experience. He also mentioned that it was an important phase of one’s life. Learn about politics but don’t involve in it completely. Even if I start a political party, I would not suggest you guys join.

It is better than you’ll Focus on your studies but also know what’s happening in the political world. He was talking about his school days where he used to get very high marks in primary and middle school. It was Kannada medium. Since I had performed consistently well, I was changed to an English medium where I had flunked. It is an important language, as almost all the courses are now available in that language.

He clearly phrased it by saying “Learn English, there is your future”. Speaking Tamil would not land you anywhere. “If Tamilians prosper, it means complete prosperity for the language as well.”

Some Leaders had made me Happy Mainly MGR and Karunanidhi: Rajinikanth

“MGR is a humanitarian beyond measure. There are a number of people he had helped in his time and one of them that he really helped was Rajinikanth. Due to work pressure I was in complete breakdown, MGR sir had personally called once a week to enquire and ask how I was. After I was cured, I just could not go out. Then they had told me that they could only remove me from the hospital after I had spoken to MGR.

“He asked me not to take any risks with the stunts he was performing, as there was an incident that had taken place before. An actor’s health is his biggest benefit, he had told me. He also asked me when would I get married. I told him I haven’t met the person yet. He asked me to do that first.”

There is no one those days who had a better understanding of politics than Karunanidhi. But he created an impact over there as well. He had started the midday meal those days and showed that it was sustainable. There was a time when people used to ask whether he was alive. He could barely talk or function properly at that point in time. But people had the sympathy and still voted for that great Leader. He is a leader beyond par.

Rajinikanth’s fans have put about hundreds of posters along the highway, from Chennai to the Venue where he had given the speech.Rajinikanth’s political party name is still yet to be decided.”People often had raised this question that why I did not join politics when Jayalalitha was alive. He believes that there is a vacuum. He also noted that there was a space for a good leader.

Nobody can argue that Jayalalitha was a really great leader and had a real impact on the people. Nobody could argue or question about her leadership. On the other hand, there was Karunanidhi who also had played a vital role. There were great leaders. He is also now not keeping well. Because of which there is a space now in Tamil Nadu politics for a good leader and I coming to fill that space, as I believe that I  can fill in the vacuum.

Rajinikanth, also stated that nobody could possibly become another MGR as each of them are unique in their own way. It would be foolish to think so. But I believe that the good authority and the people’s rule he had given I could also do that as well.Both MGR and Jayalalithaa are celebrated actors w. I thought the government would celebrate it by completely inviting the Tamil industry. That could not happen. But ACP sir had made it possible.

He had concluded by saying that “It is important to choose your friends wisely. If you are a good-hearted person, you will find good souls wherever you go and that will help you grow very much ahead. If there is a mistake in whatever I have spoken, please forgive me,” he concluded.