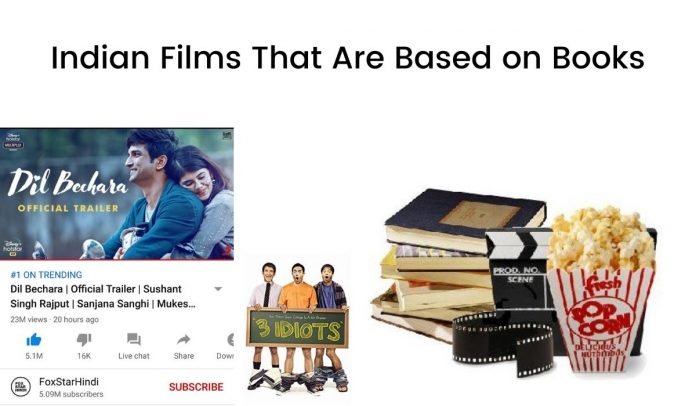 Visual representation of what we read leaves a stronger impact in our minds and makes it more entertaining. Here are  top 10 Indian films that are based on books.

Rajkumar Hirani’s 3 idiots realized in 2009 is an adaptation of Chetan bhagat’s 5 point someone. Where friendship,  college life, comedy romance, and drama are beautifully shown in the form of 3 leading characters Ranjo, Raju and Farhan played by Amir Khan, Sarman Joshi, and R Madhavan respectively.

Dil Bechara/ The fault in our stars.

The upcoming Sushant Singh Rajput’s film Dil Bechara has been inspired by John Green’s novel The Fault in our stars, where a beautiful love story between two cancer patients is shown. Love knows no bound and can survive beyond death, this movie proves the immortality of love in true sense.

The story of friendship, struggle, and attempt of fixing things in life kai po che has an essence of originality in it. This 2013 film is inspired by Chetan bhagat’s novel 3 Mistakes of my life and the bond between the three friends Ishan, Amit, and Govind are beautifully played by Sushant Singh Rajput, omi and Rajkumar Rao made the story more lively.

Hello/one night at the call center

Hello, starring Salman Khan, Sohail Khan, Sarman Joshi, Amrita Arora, and few more was an adaptation of Chetan bhagat’s book One Night at the call center. This 2008 film shows the life of a bunch of employees working at a call center and dealing with the monotony and endless phone calls, but back in their mind they hope and pray for something big. This unique concept of  Hello was loved by all.

Sarat Chandra Chattopadhyay’s iconic novel Devdas was made into a film by Sanjay Leela Bhansali in the year 2002. The story revolves around childhood unaccomplished love, selflessness, struggles, and emotional turmoils of Devdas,  Paro, and Chandramukhi played by Shahrukh Khan, Aishwariya Rai, and Madhuri Dixit. This trio made the film a huge success and gave the story a new tangent.

1961 film Kabuliwala is an adaptation of Rabindranath Tagore’s Novel Kabuliwala. The story of a bond and friendship between little Mini and the Afghani Dry fruit seller along with a twist in the tale at the end was beautifully shown in Hemen Gupta’s film Kabuliwala.

In 1964 Charulata was released under the direction of Satyajit Ray. This film is an adaptation of Rabindranath Tagore’s Nastanirh.  The story of a lonely housewife played by Madhabi Mukherjee was loved by all.

In 2014 Chetan Bhagat’s  2 states were made into a film by Abhishek Verma, casting Alia Bhat and Arjun Kapoor, their boundless bond was beautifully shown in the film.