While it’s true how your mental illness doesn’t give you any room for control or to make choices but is fighting for your life that hard and giving in that easy?

These people thought otherwise and took the reins back by accepting their problems and speaking up about them. You are not a slave to your disorder and you don’t have to give in to it. It’s important to realize that life is worth trying. There’s no button to turn the happiness back on but there’s a way to talk about it, there is a way to fight. These three people talk about how they live with mental illnesses and survive the daily battle…

“My family was having a casual gathering once, nothing special, just family spending some time together. But it wrecked my nerves to think about meeting as many people as I would and what they would think of me.

I found myself, overthinking and analyzing even the littlest of thing, irrelevant things, thing that you would casually tell me don’t matter. But here’s the thing, I can’t make it stop. 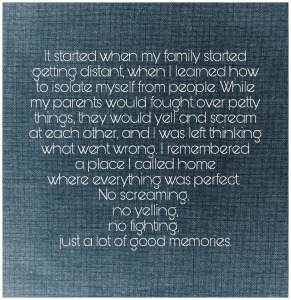 Between loud noises and the door slams, I spent the sleepless night with a distant ache in my chest and the unspoken thoughts in my head.

When my parents decided to break their marriage, I felt, oddly enough, glad. I realized it was a good thing to do. Over a long enough period of time living with someone – spending nearly all your days and all your life with them, paying bills, chasing kid around and running a home, it’s not impossible that you come to resent that person. 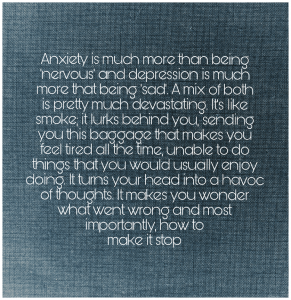 There were times people told me to ‘calm down’, or “You’re not really sick, it’s all in your head.” And trust me, I’ve tried believing them. I’ve tried ignoring it, busying myself with reading, listening to music, or just doing the chores. But it just won’t go away. It stays right there, behind you, following you, waiting until you finally give in and it can start gnawing at your skin. 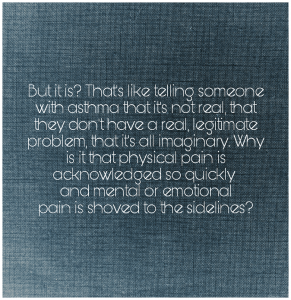 Right now in this moment, if anyone ever ask me about my past, they feel sorry, but they don’t have to. My heart is full and I have no words to describe my upbringing other than to say that I was incredibly blessed to be given people who care about me, and whom I care so much about.

At some point we all feel like nobody gives a shit but please, believe me when I say that there are people out there who care about you, who want you to be safe, who worry about you, who love you. My sister knows about my mental state and she understands, she helps me get through every day. I want you to talk about how you feel with people you love because not talking about only gives the disorder more leverage. 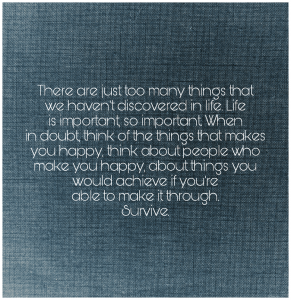 And maybe, that would just be enough.” 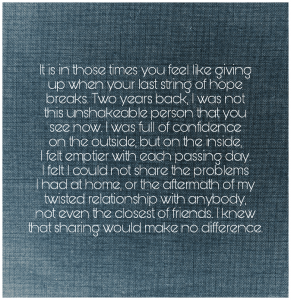 It was the summer break of 2015, I stayed home the whole day, every day. All I did was sleep the whole day, and cry every night without fail. People had tried to get me out of it and downright failed. I lost interest in everything, and that’s when I started questioning my existence. I had suicidal tendencies, and this is probably the first time I’m admitting to it.

I simply wanted it to end.

I came across a writer’s profile on Instagram one day and I loved the fact that she had the balls to not only come out of everything that had happened to her, but also to write it down, vent, and share it. I’d found my hope, I created a page that very day and started to write. Ever since, I haven’t had these thoughts again. I’ve grown more resilient. 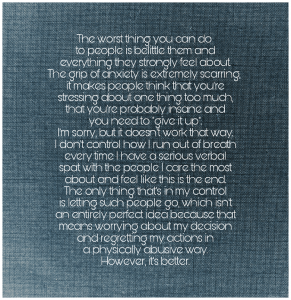 Never make people feel like the problems they have are “not significant”, because if they weren’t, they wouldn’t freaking be so troubled. Nobody enjoys depression, or being called whiny and weak. Depression hits you mentally, as well as physically. I still remember blacking out all of a sudden so many times in the past, and I’m thankful that it didn’t last. 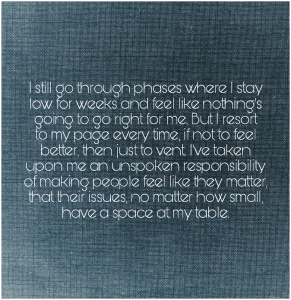 Also, it is important to understand that while talking about things may help some people, it doesn’t help everyone. I try to stay in touch with people and give them hope always, but people like me are out there too, who are far beyond sweet talk and discard help from people. To those people I’d like to say – find inspiration, something to create, to explore, and even if it excites you very little, do it. Find the smallest ray of hope you spot and grab it tight in your fist, it’ll carry you through the dark tunnel. You’ll be out before you know it. Life is always worth the struggle you face. If you can’t find someone, be your own light, lift yourself up and love life harder. Unlike people, life is more or less bound to love you back.”

READ MORE  Things You Can Do During Lockdown

“This can be long but please bear with me, it’s a journey.

When I was 13, I got into this huge fight with my mom over absolutely nothing. It seems like nothing now but back then every little thing was a hundred times magnified. 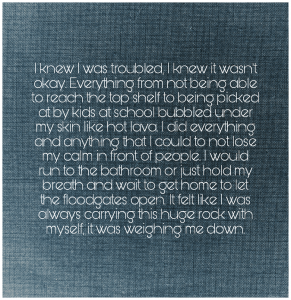 Internally, I was in chaos, had no idea what had caused this, maybe it wasn’t one thing, maybe there were several. And it was not like I wasn’t talking about it, I was, but only to one person who eventually got bored of my sob stories.

I didn’t know what I was going through, I was always extremely sad, extremely ignorant, totally cut off from the world around me and I never even wondered why no one was realizing this, it made sense but then it didn’t.

So I get how the butterfly effect works, don’t think I, of all people wouldn’t know, because I’ve experienced it firsthand.

But that night when I lost all my cool, I managed to cry even when I wasn’t alone, but I was so disturbed, the butterfly had flapped its wings a long time ago but the hurricane was upon me now. 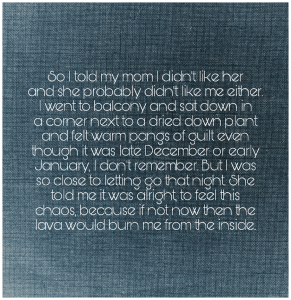 I didn’t choose to run away from pain, I chose to survive. And now that I look back at it, I only feel proud. I’ve accomplished something which wouldn’t matter otherwise.

I chose to survive, of course there’s always a choice but I want you to know that giving up is not worth it, life is. So please talk about it, tell me how you feel. I’m always here.”