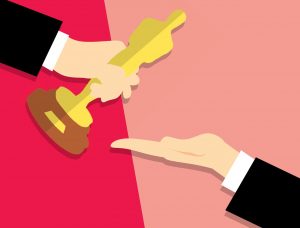 We all make mistakes sometimes but making one of those dreaded faux pas publicly can be detrimental to your reputation. Despite the fact that your company’s award show has been planned to recognize excellence, things can really go wrong when you haven’t taken everything into consideration.

It pays to take a look at some of the expert award shows and take a lesson from them. While you might have lots of options to get it right, below are some of the most embarrassing mistakes at public awards shows that you might want to avoid.

At the 2017 Oscars, the competition came down to two possibilities. La La Land and Moonlight. When it came time to announce the winner, the wrong envelope was handed to the announcer. La La Land was announced the winner. The cast came on stage and made their acceptance speeches only to discover that Moonlight was the actual winner.

When nature calls, you have no choice but to answer, but make sure that the recipient of your award is present and accounted for before you announce their name. Harry Styles, one of the winners of the 2014 Brit Awards just happened to be in the loo when his name was called as his group, One Direction was announced the winner of the Global Success Award.

At the Miss World competition in 2006, the right winner was announced correctly but another contestant was mistakenly crowned. When the host Alan Thicke announced Mrs. Russia as the winner in English, the crown was given to Mrs. Costa Rica instead. The problem was quickly corrected, but an embarrassing situation for everyone just the same.

During the 2017 awards ceremony, the names of two different movies were mixed together. The two movies both nominated for Best Picture were Hidden Figures and Fences. Michael Keaton mashed the two titles together during the Golden Globe event, introducing Octavia Spencer for Hidden Fences causing a huge backlash of criticism for down-playing the two prominently black films.

Sometimes it’s the contestant that makes the mistake, which is what happened when South Korean Violinist Lee Ji Yoon thought he heard his name announced as the winner of the Queen Elizabeth Competition. The winner was actually a woman with a similar sounding name, Lim Ji Young.

The opening of the 61st Academy Awards ceremony earned the Academy a lawsuit from Disney as well as a letter blasting them as an embarrassment for both the Academy and the entire motion picture industry all for a duet between Rob Lowe and Snow White.

John Travolta made this mistake at the 2014 Oscars when he attempted to introduce Idina Menzel for her song “Let It Go” from the movie Frozen. His mistake made it clear that he had no idea who she was or how to pronounce it correctly.

We’ve all had plenty of opportunities to do embarrassing stuff but it was Jennifer Lawrence’s turn at the 2013 Academy Awards. Falling as she climbed up the Dolby Theatre steps on her way up to receive her award. She recovered quickly as she joked that everyone had seen her fall and just felt bad.

When Michael Jackson accepted the VMAs Artist of the Millennium award, it was a little strange since they didn’t have one. What was meant to be a 44th birthday celebration complete with a birthday cake became a complete embarrassment for the King of Pop when he took the words of the introduction a little too seriously.

At the 2009 VMA awards, Kanye West boldly interrupted Taylor Swift as she was giving her acceptance speech for the Best Female Video. The whole debacle started a feud in the media that played out in the media for days. Beyonce tried to help later by inviting Taylor to come up and finish her speech, but the damage had already been done.

Regardless of why mistakes happen or who’s at fault, many of these mishaps can be avoided with a little extra care in planning and preparation. No one can avoid everything that might go wrong, but there are lots of ways you can still have a good ceremony when you take necessary steps to avoid them.