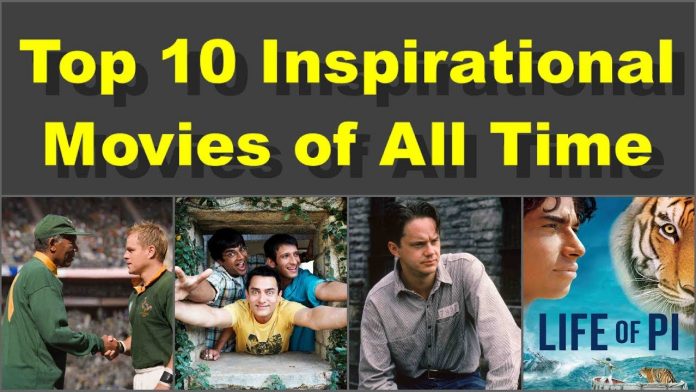 When you hear about Inspirational Movies you know that you are up for something really good that’s going to completely blow your mind. These movies have changed the mindset of many individuals and gave them a new way of thinking. There are some of the Best Inspirational Movies where we all get engrossed in. While some movies are scripted, there are some movies that are just made to impress the audience and somehow we get synced into their characters. Discussing some of the great movies, we have come up with a list of best inspirational movies of all time.

Top 10 Inspirational Movies of all Time

This movie released in 1993 is an unforgettable inspirational movie that is set during World War II. The main character in the movie Oscar Schindler is a businessman who later in his life moves to Poland in pursuit of fortune. He works with the Nazi party and hires few Jewish workers where he planned to pay them less income and make more money. The SS Nazi police start to capture and kill Jews, where Schindler decides to save his employees and their lives as well. Throughout the movie, it shows his will and determination to save his employees and he would go to any length and also fight death if possible.

This movie is based on a novel written by Harper Lee which was published in the year 1960. It showcases the value of family love and covers the reality of rape and racial differences. It also shows how parents learn from their parents. This is truly one of the best inspirational movies ever made.

This story focuses on survival. Pi is a young boy who is shipwrecked in the Pacific Ocean with a Bengal tiger.His family dies in the accident which makes himself and the tiger the only survivors of that incident. Given a chance the tiger would not think twice before eating him up. As he is stuck in the middle of nowhere he finds ways and means of survival and learns that life is a process of letting go and be happy with the little things you have.

This movie is mainly about a gifted mathematician who suffers from paranoid schizophrenia a condition where the patient feels that there a group of people out there who are going to hurt him or his family. This makes him suspicious and afraid of many things and finds it hard to form trusting relationships with other people leading to depression. This movie is based on a true story about John Nash who is a Nobel Prize-winning mathematician indicated the challenges that schizophrenics go through and brings some light on the condition. Considered to be as an inspirational movies Hollywood.

Whoever has watched this movie agrees that it was a perfect American classic that touched many hearts and people who go through the struggle. This movie captures the strength of human spirit, where Rocky an upcoming boxer beats all odds to become the ultimate champion. The movie hits all the right notes when it comes to never giving up and comes up with one of the best motivational movies. Sylvester Stallone plays an amazing role and is one of his careers best where his role had inspired fans across the world.

Forrest Gump lived his life to the fullest from a struggling childhood later turning out to become a college football star, then fighting in the Vietnam war or captaining a shrimp boat, this character leaves an impression with his childlike innocence. He tries to make people around him happy in his own very small way. This film focuses on the sentiments of love and innocence and making us grateful for the simple ways of life. Tom Hanks one of the most memorable roles.

Inspired by a true story this movie revolves around the struggle of father Chris to provide a perfect future for his son. The movie not only shows the relationship between the father and son bond but also leaves a message of never giving up. Being without a home and faced with a lot of financial issues both father and son encounter different difficulties every day. Yet after a lot of struggles, they still find happiness in the smallest things is the heartwarming plot for this film. This was one of the best inspirational movies of all time.

Well what if you decided to amputate your hand in order of survival, anyone would think twice but in the case of Aron Ralston, he had no option. 127 Hours is a movie about struggle, survival and how he overcomes all the outcomes after his hand is stuck between two rocks. The whole movie revolved around him never say die attitude and his miraculous return. This film gives us a clear cut message that we always have something grateful for and that is life. Treated as one of the best motivational movies.

The Shawshank Redemption is a tale of Banker Andy Dufresne who spends a 19-year term in prison. The film focuses on two strong messages i.e friendship and perseverance. The film not only tells about how Andy escapes the prison but also shows light to the confession and Red’s redemption who is Andy’s inmate making it a very inspiring story of hope. One of the best inspirational movies till date.

A true story about a coal miner’s son who gets inspired to build rockets in his teens when he hears about the first artificial satellite Sputnik that is launched into space. He overcomes all odds and faces a lot of resistance from his father but manages to become a rocket scientist and also a famous NASA Engineer. This story paved the way and brought about an impact to millions of people and rated it as the best inspirational movies of all time.