There are two types of people in this country. One being the “Surviving” type and another being the “living” type. The former type of people won’t think about society and they compromise on almost all things the system fails to provide but the latter are those type who are tend to question and get their rights fulfilled in all means. These people are special but largely selfish because they don’t question for others but look at their own profits, very rarely we would see some persons who fights against the system for the noble cause of others. These unsung heroes are not gods or VIP’s they are just citizens like us who fight for others rights and often helps us to rebuild the faith on the fallen system. This is about that 82 years old hero from Chennai who not only fought against the system for its flaws but also sacrificed his family life for helping others. Meet Mr.Traffic Ramaswamy the unsung hero whose life inspires the young generation of India. His facts not only stands as a role model but also teaches us we should never stop fighting no matter whoever is the opposition. Right from fighting about traffic issues and creating a revolution to latest PIL in court asking about Jayalalitha’s health status he is a man striving for the change in one of the biggest metros of India. 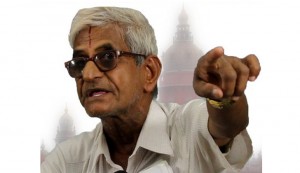 A common man for the change

Ramaswamy has born in 1934 in the agricultural family in the southern part of Tamilnadu. He got inspired by then Madras Chief Minister C.Rajagopalachari and decided to work as a helper. Ramasamy says “I am a great follower of Rajaji (Rajagopalachari). I learnt from him that we should not think twice to question the flaws in the system” recollecting his good old days. Ramaswamy has learnt sewing and joined in the Binny mills as weaving master and worked there from 1954-1971. He was very active in employee union and was also into many activities which helped the employee. He took voluntary retirement in 1971 as he decided to serve the society. So from then his journey took a new turn.

Parry’s corner being the most flocked area in the Chennai has to see a lot of traffic creating the congestion. The prime reason is being the narrow roads and other reason is the vendors and shops which were laid on the roads without any proper approvals. Ramaswamy use to be an active volunteer in controlling the traffic at parry’s corner. He use to picture the photos of incident where policeman asking for bribes from the motorists and send them to commissioner. The department got pleased to his work and gave him a permanent ID card as traffic volunteer and in 1992 people started to identify him as Traffic Ramaswamy. It is the same year where his enemies list has grown.

PILs in court against Government decisions – The questioner

It was in 1998 he challenged the government decision of constructing a flyover in the NSC Bose road which is prime location. The reason behind this PIL is already 20+ accidents happened and many were dead after the start of construction. He learnt that if the illegally occupied shops were shifted to some legal places a lot of road will come into use and this would help government save money and also a lot of valuable time. “Instead of removing the shops the government decided to go ahead of construction, it would make the things worse than better. I thought fighting legally with government is the only possible way to stop it and the court gave orders in a favor applying “Stay” on the flyover construction. 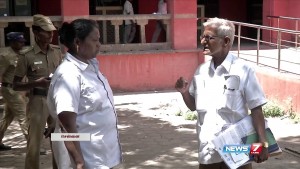 Traffic Ramaswamy has fought against fisherman who are using the three wheeler motorized auto rickshaw which is used to sell the fishes. “Those three wheeler trolley kind of structures use to release a lot of pollution. Bikes like bullet were stolen and they use to replace the engines with them. The fishes they use to sell on the trolleys were also affected by the pollution” says Ramaswamy. The government was confused whether to consider them into motor laws or not because they seem to be like a hybrid vehicle with cycle and bike alike. Ramaswamy has filed the PIL against the fisherman and the court has ordered the government to band the vehicles. “I was offered 4 lakhs to withdraw the case but I didn’t” – recollects the old Ramaswamy now whose voice is feeble but confident. This incident has left a bad scar on his life too. “I was on my regular duty of controlling the traffic, a man came and asked me the time, I was looking at the watch and he suddenly tried to assault me with his button knife. I lost my right eye vision” says Ramaswamy. This incident didn’t made him to stop from doing his activities. 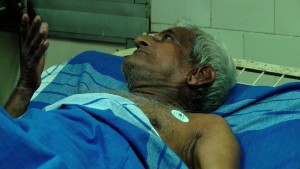 Ramaswamy stays alone in a small room behind a café in Parry’s corner. “My wife was terrified when people come to home to threaten me. I don’t want to trouble her so I moved out of my family” says Ramaswamy in a sad tone. He visits his daughter sometimes but won’t stay too long. He says all these activities were supported by his well-wishers who donates him with funds in need. “The room I am staying is also free of cost they don’t charge me. The computer and this fan is also given to me by the well-wishers”. Still in this age of 82 he goes to court daily just to attend the PIL hearing. “I have filed more than 500-600 PIL’s till now and maximum verdicts were of my favor” says with pride and happiness. He says he is fighting against the system and not against any personnel. He says his only dream is to see each and every one to question on the things going in the system. 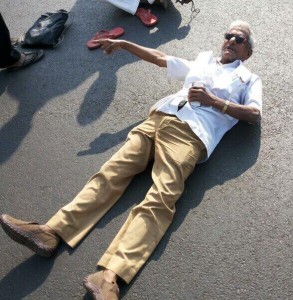 Traffic Ramaswamy who is a prime contact for many needy people listening to whom the police and officers fear off is a legend who stays in the heart of Chennaites forever. Don’t you think every city should have a true Indian like this? Comment below if you know any search person in your city.