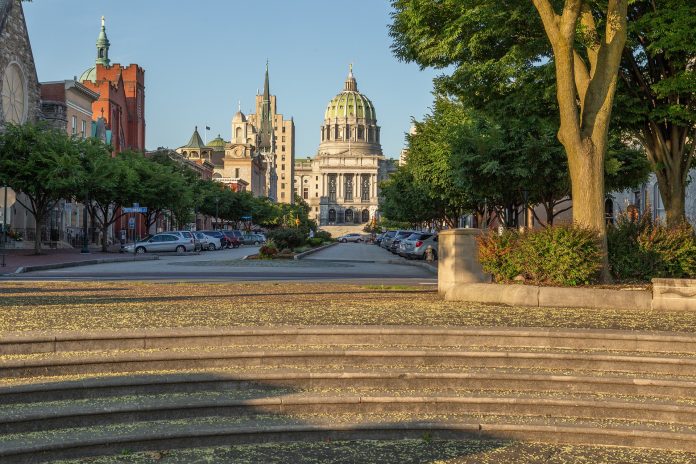 The capital of the state of Pennsylvania, Harrisburg is a historic city with stunning 18th-century architecture, gorgeous landscape including the Susquehanna River and internationally renowned museums.

Harrisburg is famous for being a short drive away from Hershey but there is far more to do in Harrisburg than eat chocolate and kayak down the river.

Hershey Park is probably one of the biggest attractions in the area. Originally created as a leisure ground for employees of Hershey’s chocolate factory, the theme park now welcomes families from around the world with seasonal events, chocolate-themed rides and an entire water park. The large theme park will make children and adults alike happy. There are roller coasters of all sizes, water rides and, of course, lots of tasty food.

Aside from the rides, Hershey Park is also home to an 11-acre zoo which homes over 200 animals and comes with the ticket price. There is also Hershey Lodge, a full-service resort located just miles from the park, and featuring one of the largest swimming pool complexes in the state and a high-end historic hotel that overlooks the park.

Harrisburg is home to one of the biggest museums chronicling the Civil War, a must-see for history fans. Opened in 2001 and affiliated in 2009 with the Smithsonian museum, there is a range of exhibitions on offer that takes a detailed look at the country’s past. There is a range of artefacts, weapons, paperwork and memorabilia from the war, including property once belonging to Robert E Lee and Abraham Lincoln.

If you are a history buff, you’ll love this museum and the 21,000 pieces of war memorabilia in their archive. If you plan your trip in advance you can visit when they are hosting one of the regular conferences and lectures led by respected historians.

The State Museum of Pennsylvania

Another trip for the history buffs, Pennsylvania has a long history that dates back to dinosaurs, through to the Civil War.

The museum includes an engaging multi-media planetarium which is great for kids, four floors of exhibits that include a collection of industrial and technological inventions and a restored Mastodon Skeleton found locally at Marshall’s Creek.

A perfect mix of history and nature, the Fort Hunter Mansion (formally known as Archibald McAllister House) has a stunning 40-acre park on the banks of the major Susquehanna River and many historical exhibits. This Victorian mansion allows you to walk through history and feel what life would have been like for rich Americans during the era. A great hands-on way of learning about the state’s history.

There is plenty to see on-site with ten on site buildings and ruins left from the 19th-century Pennsylvania Canal Trails. If this all seems a little overwhelming to investigate yourself, there are guided tours to have you make the most out of this grand manor.

Pride of the Susquehanna Riverboat Cruise

The Susquehanna River is the jewel of the city and what better way to visit than to take a riverboat trip down it.  The Pride of the Susquehanna Riverboat Cruise takes you on a slow-paced journey onboard one of the only surviving paddle-wheel riverboats in the United States.  The traditional paddle-wheel boat lets you get a new relaxing view of the Harrisburg skyline, all narrated by professional tour guides.

If traditional boat cruises aren’t your thing, there are many themed tours throughout the year like a murder mystery night, onboard concerts or the Maryland blue crab cruise trip.

The Susquehanna Art Museum underwent an expensive refurbishment and moved in 2015 to a historic bank building in the centre of Midtown Harrisburg. The 20,000 square foot building hosts a wealth of different art pieces from national and internationally respected artists, showcases diversity and creativity.  The museum has hosted exhibits dedicated to Picasso, Pop Art and war photography. Children go free and the entry is only $8 with free parking and the option to take a group tour.

Harrisburg has a great range of local craft beers and breweries. The Appalachian Brewing Company has a brewpub in Harrisburg, and if you’re not into the beers the renovated 100-year-old building is fascinating in itself.

Zeroday Brewing Company is another essential visit if you are a beer lover, offering an array of house beers, wine and ciders from around the state, alongside a great modern menu. The Lancaster Brewing Company as has a Harrisburg location.

If you are visiting the United States by sea or air for tourism or business reasons, you will need to fill in an ESTA form. This form authorizes travel for under 90 days and is popular because it’s much easier than getting a Visa, and all the forms can be filled out online.