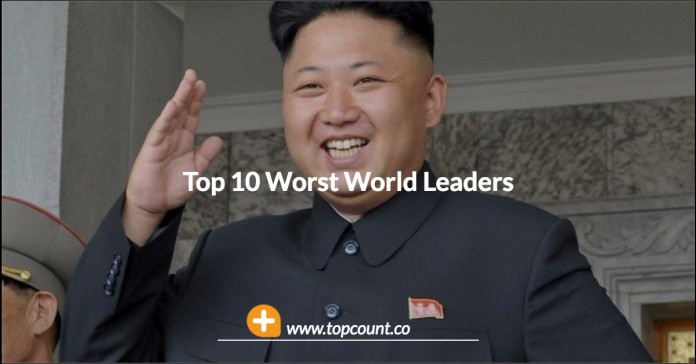 Top 10 Worst World Leaders of all time: Leaders are those exceptional individuals who work for a lofty cause and make the people who follow them, accept this cause as their own and work towards achieving it. Many such leaders changed the course of human history, by working for uplifting the downtrodden or for the freedom of their nations.  Some leaders, however, inspired and sometimes forced their followers to work for the achievement of their own selfish motives.

The insatiable thirst for wealth, and power to control the life of people gave birth to some of the worst leaders of the world.

Perhaps the most hated and most venerated leaders in world history, Adolf Hitler leads the list of the worst leaders in the world. To support the belief of the superiority of the Nordic race, Hitler had no qualms in sacrificing the life of millions of hapless and helpless people.   He created a well-oiled machinery of organizations and blind followers who killed millions of non-German people to achieve Hitler’s vision of a world ruled by the Germans.

He is the worst leader in the real sense of the term, using his economic prowess to capture political power in Thailand. He is responsible for unleashing terrible violence and dividing the Thai society to remain in power. To ensure that he and his relatives stay in the authority for eternity, the corrupt leader made all efforts to change the constitution and to control all the avenues of power in the democratic setup. People of his own country see him as a tyrant and a cold-blooded monster, responsible for the death of many innocent people.

The former member of the Khmer Rouge became the Prime Minister of Cambodia in the year 1979. The human rights organization, Amnesty International, blames him for killing his political opponents and anyone who comes in his way to enjoy unhindered power in the country. The use of brute military strength and suppression of rights of the people are other methods he uses for continuing his evil rule.

The 28th Prime minister of Thailand is a person with great looks but no intelligence. She is a puppet ruler who carries out the wishes of her brother Thaksin Shinawatra, who is fugitive now. She is a business person who has no knowledge of politics and does not have a vision for the advancement of Thai economy and people.

Saddam Hussein, the military leader who rose to become the President of Iraq, is known in the history of Middle East for his notoriety. He continued to rule the country from 1979 to 2003 and destroyed the resources of his country in the Iran –Iraq War. His greed forced him to attack the neighboring region of Kuwait, Iran and he sought to wipe them from the face of the earth.

Although many regarded him as the supreme leader of North Korea, this Korean leader did everything for his and his family’s pleasure until his last day in power. The leader captured important position in the Korean army and political, circles so that he can exercise complete control on the life of the people. Death was the punishment for all those who tried to escape to South Korea to get freedom from the dictatorship. He is one of the most corrupt leaders in the world.

The son of Kim Jong II is an even worse leader than his father.  Kim Jong-Un kills even his family and relatives. The failure of this leader lies in the fact that he does not even try for wealth generation in his country and only cares about his hairstyle. This kind of leader can do no good to the people of a country.

Another Thai leader and Prime Minister accused of using political and financial clout to buy the votes during the elections in Thailand. The Concourt removed him and his party from power for different kinds of malpractices that Somchai engaged in. He could not do anything good for his people.

Although a leader of the Communist Party of Russia, this military commander was responsible for t a dictatorial rule in his country between for almost thirty years. Stalin could not tolerate any disagreement with his ideas. He is a leader who is responsible for the death of about 20 million people belonging to his country. He loved a life of luxury at the cost of people and justified it in terms of the communist principle.

This Cambodian leader almost took back Cambodia to the pre-historic ages. This head of the Communist Party and the Khmer Rouge did nothing for the modernization of his country. He is responsible for the killing of a large section of the population in Cambodia itself.

A study about these leaders must make us aware of the disadvantages of blindly following leaders and their ideas. Sometimes adverse circumstances force people to tolerate the autocratic rule of a leader, but protesting against unjust and non-democratic practices can certainly lead to the decline of such leaders.