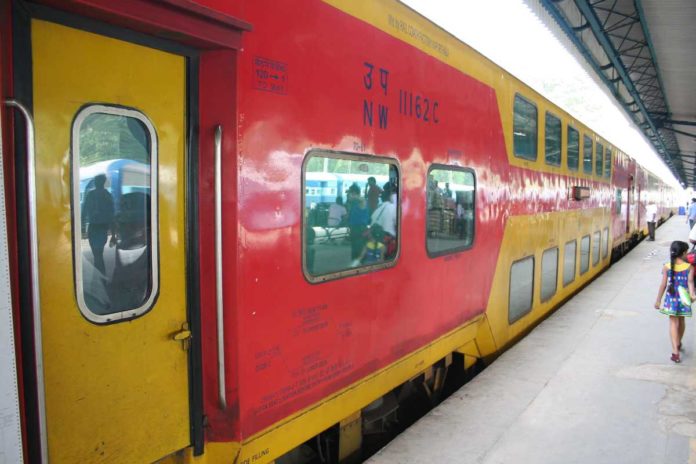 Railways are the first largest network in India. It ranges from East to West and from North to South. It covers almost every part of India in a limited time. Railways have been among the top sectors that provide jobs to maximum no.of people and indulge them in it, and provides maximum support and are Economically good. Thousands of people travel from one place to another by train. It is economical, easily accessible and time-saving. Trains are the backbone of Industries as they transport raw materials and products from one place to another and provide maximum transportation at nominal rates.

Here we are going to tell you about some of the best running trains that are running on tracks and are providing the public with all the care and support during their journey:

This is one of the topmost luxurious trains running on the track in recent times. Maharajas Express has an impressive design and texture inside the train that passengers like to travel on the train. It is equipped with vintage furniture, carpets, soft bed with trapped silk bed linens. It includes some facilities like free Wifi, LCD around the attendants. This train serves you globally and is one of the best trains.

Rajdhani express stands among one of the top-rated trains in India. It provides A+ travelling experience with all the facilities provided to the passengers. It is fully air-conditioned trains connecting from Delhi and other capital states of India. Rajdhani Express is also one of the oldest trains of India.

Shatabdi connects New Delhi with some major cities of India. It is also one of luxurious trains in India. Shatabdi Express runs over a short distance and returns day by today. Shatabdi Express is also the most preferred train among passengers as it reaches on time on the stations and usually, it runs on time. Getting seats into it is quite difficult as more no.of passengers are graving for tickets in it.

Tejas Express is one of the fastest trains in India. It gives tough competition to Rajdhani, Shatabdi, Gatimann Express. The train runs at a speed of 130km/hr and it is India’s first semi high speed fully centralised AC train with all the facilities being provided to the customers. It is one of the relevant trains Indian Railway has ever given. Tejas has all the features of Aircraft and it has some awesome facilities that other trains lack.