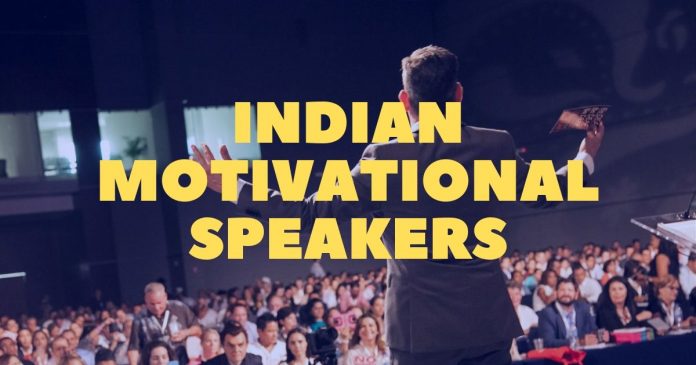 There are many Motivational Speakers in India that have paved their way and are seen nowadays in many events such as the Indian Army, College fests, Indian railways and many more.

While India as a country has many speakers who are from different cities, we have cited the famous inspirational speakers who have been a role model for many young individuals over the past few years.

Simerjeet Singh is a very young and iconic motivational speaker as well as a success coach. He had started his career earlier in hotel management and got into a reputed program by Marriott International Training Program. He grew his hotel business in Dubai and gained critical acclaim in the field of hotel line. He also grew hotels in the USA and India.

After a few years, he decided to change his path completely and started becoming an inspirational speaker. After which there was no looking back since then he had given about 1000 and more motivational talks and seminars which inspired people in many companies. In his tenure, he had worked previously with companies like Novartis, PWC, and Vodafone. His sessions are considered to be very unique.

One of the best motivational speakers in India, an author as well with a few years of experience in politics. His family had owned coal mines and were later nationalized by the Government which made him do previous jobs as an insurance agent, a franchise business and washing cars. He has written many bestselling books like You Can Win and started a political party after joining politics to bring in education, where the party was called Bharatiya Rashtravadi Samanata party.

He has traveled all over India and also other countries like Singapore, China to deliver seminars. There were many controversies on his name that stated that he had copied jokes and quotes written by Mr. Amrit Lal but later it was settled. He is considered one of the best motivational speakers in India.

Robin Sharma is based out of Canada. However, he is on the list because he is of Indian origin and his book The Monk who sold his Ferrari had an impact on the lives of millions of people. It is the story of a lawyer who has all the wealth but has no true happiness and satisfaction. It is loosely based on Sharma’s true experiences as a lawyer which later made him quit and become a motivational speaker.

At the initial stage, he used to struggle with books and seminars and kept trying until he achieved massive success. Today he is working with some big companies like Nike to help them in their leadership and sales. He has shared the stage with people like Jack Welch, Bill Clinton, and Richard Branson.

Priya Kumar makes it to our list of motivational speakers mainly because of her dynamic style and different entertaining sessions. She is an author and does regular videos to connect with people. She speaks at several conferences and events. Born in Chandigarh she used to work as a tuition teacher before becoming a speaker.

She started working with Dr. Niranjan Patel, her neighbor who used to do seminars. After he passed away she continued his vision of getting the change and impacting people.

Her clients include Colors TV, Bacardi, and Airtel. She is based out of Mumbai. She has written several books where “The Calling” was a massive hit.

Chetan Bhagat is an Indian author and also a motivational speaker. He completed his education from IIM and became an investment banker in Goldman Sachs. He had later quit his job and wrote several books that later became best sellers. His books were later made into movies and he also appeared in Television shows like Nach Baliye.

He normally targets the youth audience to inspire and motivate them. He speaks in colleges as well as companies in India, which is the reason he is on our list of motivational speakers.

Deepak Chopra is originally from Delhi who was trained to be a doctor. He had a successful practice as a doctor and moved to America ever since. However, he got into spirituality and started practicing meditation with Mahesh Yogi. He went on to write some bestselling books. He stopped practicing doctorate and now completely focuses on motivational speaking and attends seminars pertaining to health.

Millions of people have mainly benefitted from his ideas and books. He had a major impact on celebrities like Bill Clinton and Michael Jackson. He also organizes popular retreats and runs a center for the distressed.

He is one of the most famous motivational speakers India has ever had. In addition to being a speaker, he also has experience as an entrepreneur. He is the founder of Happionaire Way, where earlier back in his childhood days he lived a hard life where traveling in auto’s or bus was hard on him. He had moved to Iran and sold comics and clothes and later went back to India and did door to door selling at age 16. After many years he had founded the Happionaire way where his focus was entirely on growth, happiness, leadership, motivation, and business.

He is also #1 Bestselling author who has spoken for almost a thousand companies and events around the world. His clients are top CEOs, billionaires and movie stars in addition to many regular people as well. His sessions and talks are successful and are attended by people in more than 100 countries. He is considered to be one of the best motivational speakers in India.

Even though Jai Shetty isn’t in India, he is on this list because of his Indian heritage. He is a British Indian internet sensation who has well over 3 million subscribers on YouTube. Shetty is a graduate of Cass Business School at the University of London. He has also authored a book called ‘Think Like A Monk’.

He has appeared on The Ellen DeGeneres Show and The Today Show. Shetty was included in the Forbes 30 Under 30 Europe list in 2017. Shetty has been featured on the BBC and has spoken to audiences at Google, Nasdaq, HSBC, and Barclays.

Gaur Gopal Das is a former Hewlett Packard engineer turned Indian lifestyle coach and motivational speaker who is part of the International Society for Krishna Consciousness (ISKCON). He received Dadasaheb Phalke Award in 2020 as a Global Changemaker of the Year

He has a YouTube channel with over 2.5million subscribers with a combined 135 million views for all his videos. He also is an author, he wrote 2 books called Life’s amazing secrets and The way of the Monk.

Picture of Sandeep Maheshwari with his wife

He is the most popular motivational speaker in India right now. Sandeep Maheshwari is in the list of India’s top entrepreneurs. He is the Founder and CEO of Imagesbazaar.com.  His YouTube Channel has around 14 million views and a combined 786 million views for all his content on the video-sharing site. He has over 1.6million Instagram followers making him the most influential motivational speaker.

He has been awarded the Creative Entrepreneur of the Year 2013 Award by the “Entrepreneur India Summit”. “Business World” magazine has called him one of India’s most promising entrepreneurs.

This was just a list of the traditional motivational speakers in India. India also has a lot of celebrities who are amazing public speakers, like Prime Minister Narendra Modi, Bollywood King Shah Rukh Khan, Boman Irani, etc.

Who is the best motivational speaker in India?

Answers to this question is little complicated but definitely Sandeep Maheshwari is the most popular and trendiest motivational speaker, especially among students and youngster.