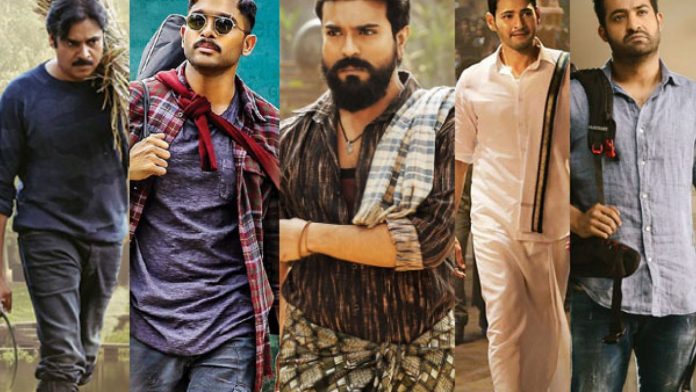 Among various sections of the Indian film industry, the Tollywood aka the Telugu Film industry is also one of the most crucial and famous industries of our society which produced numbers of successful movies in years to years of different genres from horror, suspense, comedy, thrilling, Masala movies, actions, comedy, creative, thought-provoking and so on. Literally like the Bollywood industry, the Tollywood industry is also loaded with some of the most talented actors who are known wide across the country.

These top 20 Tollywood Actors produced great performances in their respective movies which are also quality based movies. Apart from delivers mesmerizing performances in their respective movies the Tollywood stars are also giving complex to the bandwagons of the tinsel towns in the matter of looks, fashion, attitude, and style.

The actors set their own style statement which is enough to woo audiences no wonder why the stars are having a huge fan following from all across the globe.

Vijay Deverrakonda is one of the most dashing and stylish actors in Tollywood. He started his career with the film Nuvvila but could not establish his existence by then but his 2016 film Pelli Choopulu got him all the fame along with the National Film Award for Best feature film in Telegu.

Hold on, this is still not the turning point in his journey, the turn came with the blockbuster Arjun Reddy which changed the fabric of his journey. Not only his acting was appreciated but his casual look with dark shades set a new trend for the college-goers. He also paired with the most gorgeous actress in Tollywood Rashmika Mandanna in the film Geetha Govindam and showed the audience a new dimension of chemistry.

Prabhas one of the most sorted Tollywood actors in his own league on the choices of his films. Currently, he is enjoying much success after the release of his highly acclaimed movie “Bahubali”. Apart from a fantastic acting, Prabhas is blessed with a most magnified look.

The 33-years-old Telugu actor Allu Arjun is known for his massive performances in his blockbuster movies like “Julayi”, “Rudhramadevi”, “Race Gurram” and so on. With the gigantic fan following the movie-artist fondly address as Bunny by his fans. He is a great dancer too and everybody literally smitten by his dancing skills and always managed to look jagged in his every outfit.

Chennai-Born Telugu actor Mahesh Babu comes from the renowned celebrity family but he is known for his performances, not for his background. Honored with an extremely handsome personality, Mahesh Babu is touted as the best actor in Tollywood. He has always received thumbs up when it comes to looking good.

Among the most popular actor of Tollywood Pawan Kalyan is always about donning different roles and aiming for success at all times. He is also a role model of mass but he proved impressive for the class also. His style statement is simple but unique and special.

No wonder why his gestures and mannerisms are adopted strongly by the fans. Indeed Power Star Pawan Kalyan is treated as demigod status among the fans and the star carved a niche of his own and this was mainly due to his mannerisms and style.

Ram Charan is one of those Telugu actors who manage to bag all the awards if he is nominated for any category, he doesn’t allow others to beat him. It sounds impossible but it is a fact. This handsome and stylish Telugu hero is also a producer.

His remarkable films are Chirutha, Magadheera, Rangasthalam, Nayak, Dhruv and the list goes on. He was seen in a Bollywood movie called Zanjeer where he paired with the desi girl of Bollywood Priyanka Chopra and he got the same amount of love from the Bollywood industry.

Jr Ntr is one of the most good looking Telugu heroes who knows the spell to convert the audience into his fans. He proved himself to be a great actor as a kid by bagging National Film Award for the best children’s film for the movie Ramayanam.

After growing up he impressed us with his works like student No. 1, Baadshah, Temper, RRR, Adhurs and the list goes on. His pair with Amisha Patel and Tamannaah Bhatia was loved by all.

Dhanush is a complete package of talent and charm. He is one of the most handsome actors in Tollywood. Be it her acting or singing people go crazy about him. He has turned 7 Filmfare awards south with is performance and charisma. His films like Maari,3, Pattas, Enai Noki Paayum Thota, Venghai and many more were loved by all.

He shared the screen with the most beautiful actresses like Tamannaah Bhatiya, Shruti Haasan, Kajol, Genelia D’Souza and so on. This Tollywood actor also paired with the Bollywood beauty queen Sonam Kapoor in a film called Ranjhana, which also was a big hit.

The actor known in the country for his amazing acting skills. And currently, he is ridding success with his epic and blockbuster “Bahubali Movie”. Rana has his own style statement; literally he is having an effortless sense of style. He is known for films like “Dum Maaro Dum”, “Leader”, “Rudhramadevi” and so on.

Naga Chaitanya is not only one of the most Handsome heroes in Telegu but also the most successful one. Be it his style statement or his acting skills he knows the trick to mesmerize the audience. His acting journey started with the film Josh, he also bagged the best debut award for the same.

His hits include films like 100% love, Ye Maaya Chesvae, Premam, Manam and many more to count. He shared his screen with famous actresses like Tamannaah, Kajal Agarwal and many other Tollywood beauties, and the chemistry between Naga and the most beautiful Tollywood actress Samantha is loved by all.

Siddharth is a multi-talented celebrity who has proficiency in acting, playback singing and also as a screenplay writer. Apart from dazzles in Southern movies, he showcases his acting skills in epic Bollywood movie “Rang De Basanti”. Siddharth Narayan managed to look extremely handsome even in casual as well in the formal dress.

The 23-years-old young lad just makes his acting debut in the T-Town with the movie “Akhil”, indeed his presence has been felt. Apart from having a female fan following, the actor even managed to receive a compliment in terms of looks from the entire film fraternity. Whether it is formal or casual get-up he looks perfects, in all attire.

Nithin Reddy is the most handsome actor of the Telugu cinema literally with his simple but mesmerizing look. He worked in Bollywood movie “Agyaat” too with dozen of the Tollywood movies. His style statement is very simple, indeed dignified. His pleasant personality is literally par apart.

Sharwanand comes from a film background and Telugu actor Ram Pothineni is said to be his cousin but he did not need any personal support to shine on in Tollywood. This Tollywood hero caught our attention in a thumps up advertisement where he shared the screen with Chiranjeevi.

He also managed to hit a sixer in his very first film Engeyum Eppodhum and grabbed the best debut award for the same. His acting skills, dance, and fashion entertain the audience to the brim.

With his extremely dashing and handsome look he successfully woos audiences with a massive female fan following, he is doing very well in the Telugu film industry. He is known for movies like “Patas”. Last year he also produced the Telugu movie like “Kick 2” with Tollywood superstar Ravi Teja and the young actress Rakul Preet Singh.

If you see the latest fashion trends and if you have to give a challenge to the young heroes regarding looks is never so easy, still if you are over 50. But the legendary actor Akkineni Nagarjuna does it with full-on style. It would be hard to believe that he is 56; he looks much younger than his age.

The actor is ruling Tollywood for 3 decades; still, he is doing the same. The 56-years-old cine-artist is counted as one of the most versatile actors of the Telugu cinema. Nagarjuna looks spiffy in anything he wears.

Varun Tej impressed the audience with his on-screen chemistry with the most beautiful actress of south Pooja Hegde in his very first film Mukunda. This Tollywood actor again gifted the industry a hit with his second film Kanche and his fan following increased. Good looks, charm and great performance define him.

R.Madhavan is one of the most successful actors in Tollywood who equally flourished in the Bollywood industry. His style is very simple yet classy. sometimes less is more – his style justifies this statement from top to bottom.

His films Vettai, Arya, Dumm Dumm Dumm, Anbe Shivam, Rang de Basanti, Sala Khadoos, 3 idiots have a unique flavor in them. His simplicity and acting make him the winner in every race.

Kamal Haasan is one of the most famous, talented and stylish actors in Tollywood, in other words, he is a trendsetter. This Telegu actor received a National film award, not only once but thrice.

Be it Thevar Magan or Chachi 420, Uttama Villain or Sadma, Sagara Sangaman or Mumbai express – every time he left us speechless with his performance. He shared his screen with globally famous actress Sridevi. Not only that he is also the father of two most beautiful actresses in Tollywood- Shruti Haasan and Akshara Haasan.

This Telugu actor has also made many short films. Apart from being one of the most handsome and talented actors in Tollywood, he is also a great director and screenplay writer. His chocolate boy image is loved by the mass.