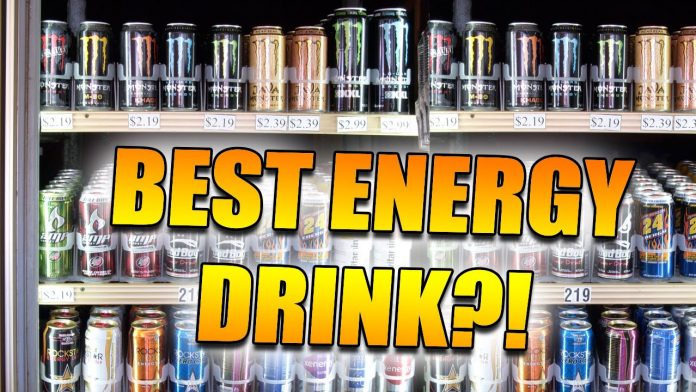 On a daily basis, we follow the routine life by doing things that somehow make us tired by the end of the day. Did you ever feel that you need a boost of energy?

At some point in time, many of us are stuck in some overdue work that has to be finished, or there is a meeting that you have to handle are some of the never-ending errands where sometimes we just need a boost. Thankfully there is a solution for this and i.e Energy Drinks.

These drinks were invented so that it improves our concentration, daily performance when you need it the most. Energy drinks usually contain amounts of vitamins, herbs, and also caffeine. There are some additional ingredients like acai, carbonated water, inositol, taurine, and Biloba.

While some energy drinks are simply the best recipe for your upliftment of energy, you must take note that there are many such brands out there in the world that claim to be the best, you might be wondering what’s the strongest energy drink, to answer your questions we have a list of most Powerful energy drinks.

It is one of the highest caffeinated beverages in the world and is one of the strongest energy drinks ever made. This drink contains almost 344 mg of caffeine with many other kicking ingredients. A perfect recipe to get your day pumped up.

It is a very healthy energy drinkand one of the strongest energy drink in the world that is designed to offer a great amount of energy. This is a blend of stimulants and contains almost 350 mg of caffeine per can.

The only one can be taken a day as recommended by doctors as it could affect the health on a later basis. This drink is the best for bodybuilders.

This was launched in 2001, and post which it had turned out to be one of the most unique and versatile drinks in the world. Rockstar comes in a total of 16-ounce cans of about many flavors that keep you guessing.

A can of 280 calories Rockstar is designed to suit dieters with zero sugar. Though this drink is expensive it is all worth it which makes it a very healthy energy drink.

Redline Energy Drink is one of the top energy drink that certainly heads above the rest and is again one of the strongest energy drink in the world. This drink was launched mainly for bodybuilders.

Redline is not powerful due to its high amount of caffeine but also because of the synergistic effects. Doctors here recommend to just consume half a can due to how powerful this energy drink is.

Originally known as Elements Energy, It was later rebranded to Venom after the sales fell down. Most Venom flavors’ names are inspired by snakes, which makes sense as there is a really cool looking snake on the Cover of the can. It is a very strong Energy Drink with 162 mg of caffeine per bottle.

The Rage Inferno Energy Drink is an iconic and very powerful drink which makes a person automatically energized. Not everyone would find the taste good and helps most of the people to fire up a lot of energy. It has a list of healthy ingredients of 375 mg of good stuff which includes a large amount of caffeine

G Fuel is one of the most popular energy drinks right now.  They usually sell a powder variant, which you can mix in water to get a sugar-loaded drink, but they also have a carbonated drink variant which comes in a can and also in the form of energy crystals to directly consume. One serving of Gfuel is said to have 150mg of caffeine. They also offer a caffeine-free variant.

Launched in the year 2005, this energy drink is one of the most effective energy drinkthat is available in almost all countries. Though it is very small in size it has the ability to knock some great amount of energy who takes a sip as it also helps in improving alertness and concentration.

Offering zero sugar, zero calories, and zero artificial Flavors & Colors, Reign claims to be the ultimate fitness-focused beverage to support your high-performance needs. It contains about 300mg of natural caffeine. It comes in 9 different flavors.

This concentrated energy supplement comes in small sizes. Many people think that it is not effective but on the other side, this energy drink gives you high energy boosting within no time. This is packed with a large variety of robust performance blended together to give a shockwave of energy and can be used before any workout.

This is an energy drink that was started in Europe ideally for bodybuilders. This drink contains a large amount of caffeine (almost 300mg per bottle) which is enough to stimulate a high amount of energy.

It is highly recommended not to have more than one energy drink in a day. Ripped Hardcore Liquid is available in many flavors and is one of the top energy drink.

It made its debut in the market in the year 2002. This popular energy drink is affordable and has a very delicious taste when compared to other energy drinks and most of all it is highly energizing. This has about 160mg of caffeine per can.

This drink comes in two types, i.e one with sugar and one without sugar. Due to its success, the monster produces over two dozen varieties of drinks on a daily basis and it is one of the best energy drinks.

Here is the fact, Monster energy drink brand is owned by the Coca-Cola Company. It is available in almost all countries.

Well, we all know about this legendary energy drink that has been on the top for a very long time in this industry. Presenting to you Red Bull a popular slender blue and silver can which has a powerful punch. Though there are many competitors Red Bull remains the best original Australian drink.

It has about 80 mg of caffeine, Vitamin -B Their title “Red Bull gives you wings” is a very famous tagline that improves your concentration and alertness. Though the taste is kind of unusual still it is the best selling energy drink in the world and is one of the most effective energy drinks as well.