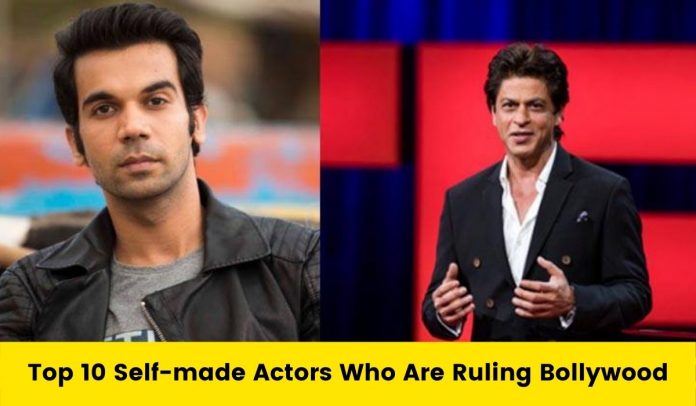 Being in a milieu of favoritism and personal preferences, the flag bearer of nepotism always reserved a privileged slot for the star kids while the out-comers or struggles find it more difficult to curve their identities in Bollywood. But the undeniable fact remains constant that mediocrity is always threatened by talent, which automatically turns the table and changes the game in the favor of the more deserving ones. Establishing existence in this fancy world, without any godfather or family members from the film fraternity might charge you high, but at the end, talent does all the talking. Here are the top 10 outsiders of Bollywood who made their position and ruling the industry with their talent, not with their respective family backgrounds.

king khan and the Baadshah of romance in Bollywood have been ruling the industry with his charm and talent for years. His non-filmy background couldn’t stop him from success. He started impressing the audience with his television debut Fauji, later his lead role in circus earned many applauds. Khan decided to give it a shot on the big screen with his film debut Deewana. His existence in Bollywood became permanent with his debut, honoring him with the Filmfare best actor Male debut award. His versatility as an anti-hero in films like Darr or Baazigar was jaw-dropping. Filmfare award for the best performance in a negative role was credited to him. Though the king of romance is a pro in romancing with all the Leading ladies, but his pair with Kajol is still iconic. Be it Dilwale dulhania le Jayenge, Kuch Kuch Hota hai, or Kabhi Khushi Kabhi Gham this duo made us believe in love with their on-screen chemistry. On the other hand his contemporary films like Ra one, Dilwale, Dear Zindagi looked as fresh as always. After gifting more than 90 films to the industry he is hopefully opting for more.

From serving food in Thailand to acting in films, the journey must have been no less than a rollercoaster ride. Not only just his acting but also his actions set a bar which is tough to touch. Fitness freak Akshay Kumar always tries to deliver a social message through his films, be it Mission Mangal, Padman or Toilet: Ek prem Katha he enlightened and had aware the mass regarding certain stigma in our society. On the other hand his action films like Holiday: a soldier is never off duty, Gabbar is back or Nam Sabana he showed the definition of perfection through his stunts. This same man has a stronghold on comedy and entertainment as well which is clearly visible in films like entertainment, Housefull or Bala. Such versatility is rare to be found and Bollywood cherishes his presence to the fullest.

Queen of Bollywood Kangana Ranaut is an epitome of grace and talent. Her boldness sets her apart from the rest. She never looked for a godfather and believed in her talent . Her faith in her abilities helped her to establish her signification and grab all the attention through her film gangster and gradually opened and bloomed in her later films like Life in a metro or fashion. Her films like Queen or Tannu weds Mannu raised her more on the ladder of success. After grabbing multiple National awards she made her position firmer in Bollywood. And truly ruling like a queen.

One of the highest-paid and talented actors of Bollywood, Ayushman Khurana started his journey as a reality show contestant. From Roadies to Films his journey has been really inspiring. Every film of Ayushman brings out some sensitive issues of the society- be it Vicky donor or Subh Mangal Saavdhan. This actor is also a very talented singer, who did playback for his films and earned Filmfare Award for Best Male playback singer for “Pani Da Rang”. Ayushman’s brilliant performance in Andhadhun and Article 15 got him to back to back Filmfare awards, Khurana also grabbed National Film Award for Best Actor. This self-made gem is surely the pride of Bollywood.

Another self-made actor of Bollywood, Rajkumar Rao grabbed our attention with his film Kai Po Che and ended up winning National Film Award for Best Actor at the very beginning of his career for the biographical drama Shahid. He kept on rising higher with his films like Queen, Bareilly ki Barfi, Stree, Newton, and so on.

The Desi girl of Bollywood, Priyanka Chopra in an international icon who is an inspiration to all. After winning Miss World pageant she stepped in Bollywood with a bang. Her films like Mujhse Shaadi Karogi, Don 2, Barfi, Bajirao Mastani, Dostana, Anjaana Anjaani, and many more kept on portraying her versatility as an actor. She also worked in Hollywood. With her American TV series Quantico, she got international fame. Recently she has seen in the Bollywood film The sky is pink, in 2019. Priyanka Chopra is also a very fine singer, she did playback in her film Mary Kom and Dil Dhadake do. An actor with such a perfect voice is rare to get. She has set a bar so high that it seems impossible to even touch.

Though Sushant Singh Rajput could not survive for a long time in the running and his sudden demise shocked the industry, still, his short journey has been remarkable. Engineering student Sushant Sushant Singh Rajput found his passion for acting and dancing. Started his career with Tv serial Pavitra Rishta, where he received a huge amount of love, Sushant stepped in Bollywood with his debut Kai Po Che, which brought him success and recognition. After that, there was no looking back. His films M.S Dhoni: The untold story, Kedarnath, Chhichhore got multiple awards and love. Currently, people are waiting for his upcoming film Dil Bechara which is going to be released on 25th July on the OTT platform.

Coming from a Non-filmy background Karthik Aryan got his first break in Pyaar ka Panchanama after three years of struggle. Karthik managed to grab awards and attention at the same time from the very beginning of his career. Later his performances in Sonu ke titu ki sweety, Luka chupi, love aaj Kal were commendable.

Another talented actor of Bollywood, kriti sanon, managed to grab the best debut female award for her first film heropanti, ever since then there was no looking back.
Her films like luka chupi, Rabtaa, Bareilley ki Barfi were huge hits. Her simplicity, freshness and hard work got her the place she deserves.

Anushka Sharma is one of the highest-paid actors in the industry who started her career with Rab ne bana di jodi co-starring Shahrukh khan, which was a massive hit, after that her back to back films like ladies Vs Ricky Bahl, patiyala house, jab tak hai jaan, ae dil hai muskil, paari, PK, NH10 made her unstoppable and gave her a bigger name.