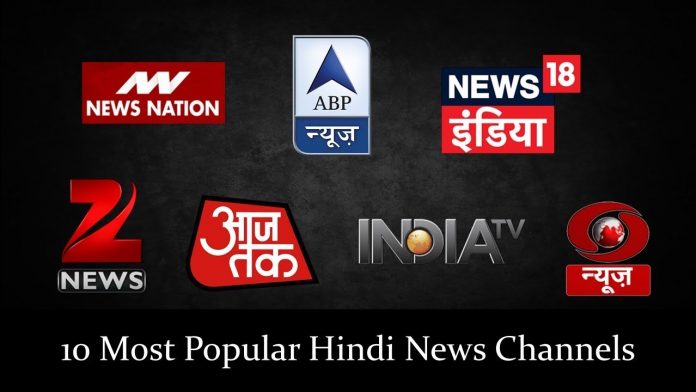 India is a country where the media plays a crucial role in shaping the thoughts of societies. Olden days had newspapers and radio that had all the news, but now it is through the Internet and television that the news comes under one roof and that is called media. The viewership for all the news channels has been skyrocketing in the last few years. We have seen many Popular News Channels in India, that has paved the way and has provided us with all the latest news.

We always land up watching the news when we are eating or trying to rest a bit but things have become so equipped that all this news is being broadcasted through an app on mobile phones. These News channels have been trying ways and means to get a lot of viewership and have been successful. Discussing the role of media in today’s generation we have come up with a list of best news channels in India.

DD News is one of the oldest channels which broadcasted current news. This channel is still considered to be one of the most authentic channels. The actual name of the channel is Doordarshan News but it is popularly known as DD News. It is a 24 hours news broadcasting channel. The Prasar Bharati board allowed DD news to showcase 24 hours news instead of DD Metro.DD News mostly shows News in Hindi and English and is popular among Indian viewers.

The tag line of this news channel asks its viewers to ‘think First’, yes it is one of the most famous News channels in India, News 24. Being launched in the year 2007 this news channel managed to hold a position in the viewer’s mind, keeping its competitors aside. B.A.G Network is the owner of this Hindi News channel. This Indian News channel provides News for 24 hours, and it broadcasts Hindi news to many places other than India. Lately, this channel came up with its new channel logo which is gladly accepted by all.

Like the other mentioned channels News Nation gives its service for 24 hours. It telecasts the news for the audience for 24*7. The owner of this channel News Nation Network Pvt ltd launched the channel in the year 2013 by testing the signals from 2012 onwards. News Nation has its headquarters in Noida. This India based channel broadcasts news in Hindi and mostly shows up news regarding politics, sports, crime, and entertainment. News Nation came up with its regional channel as well in the year 2014.

Sahara India Pariwar launched this channel in the year 2003 on March 28. This India based news channel has its headquarters in New Delhi. Sahara Samay News brings up all the updates to its viewers for 24 long hours, non-stop. This channel telecasts all the news in the Hindi language.

It is marked as one of the oldest new channels in India. It had been launched in February 1998. From the year 2003, it had become a complete Hindi news channel. It was the first bilingual i.e English — Hindi news service that had been broadcasted in India. The Headquarters are located in Noida, India. Rubika Liyaquat recently quits Zee News; Moves to ABP News Network.

ZeeNews is a Hindi news channel owned by Zee Media. The channel has been in business for over 20 years. Its PrimeTime show ‘Daily News & Analysis (DNA)’  is hosted by Sudhir Chaudhary. It’s a Multilingual Company with channels like Zee Telugu, Zee Bangla, Zee Marathi, etc. There is also Zee Business for business-related news in Hindi.

It had been started in the year 1999 and is the property of Zee Media Corporation Company. It is another old news channel in India and is also considered to be one of the famous channels in India.It is owned by Subash Chandra and works on the slogan “Soch Badlo, Desh Badlo“. Headquarters are situated in Noida, Delhi. It has sister channels like Zee Business, 24 Ghanta, etc.

In the year 2018 India Tv has been rated as one of the best news channels in India.It is a Hindi news channel which is based in Noida. It had started in the year 2004 by Rajat Sharma and his wife. The motto of this channel is “Aap ki Avaaz“. It is recognized for its sensationalized way of reporting.

Launched in the year Feb 2008, India News is a 24 hour Hindi News channel that is owned by Kartikeya Sharma. The motto is “Desh Ki Dhadkan”. The headquarters are located in Noida, India. The sister channel is India news Haryana and also includes NewsX. The program Ardh Satya had won the Prestigious Redink Awards.

For over 30 years NDTV has been at the forefront of Indian news Channels. NDTV India is owned by Delhi Television limited and was the brainchild of its Chairman, Prannoy Roy and his wife Radhika Roy in 1988.  Currently, their PrimeTime host is Ravish Kumar, who recently won the Ramon Magsaysay Award(for Journalism) in 2019.

News18, also known as CNN News 18, is an English language news channel located in NOIDA, UP. It was earlier known as CNN-IBN but later rebranded to News18. It also hosts a very popular satirical news show called ‘The Week That Wasn’t’ hosted by Cyrus Broacha. Its sister channel in Hindi is called News18 India. It has a channel called CNBC TV18 for business news in India.

The news channel is one of the best news channels in India,where it compromised of different segments like epicenter @7, India 360, News 18 Sports, face off are some of the shows.

It is one of the popular news channels in India,which is been successfully run by none other than the renowned journalist Rajdeep Sardesai who has high standards and dynamic personality.

The news channel’s headquarters are in Noida, India and were launched in the year 2003. It covers all kinds of news that is based both on the national and international news. It serves you with the latest and most accurate news.

Times Now might be the most popular news channel on the list. After Arnab Goswami left the channel, it has been the 3rd most-watched news channel in India. It is owned by the Times Group, which also owns Zoom, ET Now and Movies Now. Group Editor Navika Kumar and Editor in chief Rahul Shivshankar handle the debates on the channel.

The success of this worldwide news channel is mainly because of the broadcast presenter Arnab Goswami who had been the limelight of the prime time news show at 9 pm for a very long time. It is counted as the best English news channel in India. It has always been a step ahead when compared to other news channels and is one of the best news channels in Indiafor the year 2018. In terms of popularity as well this news channel continues to impress the audience in many ways.

AajTak is one of the oldest Hindi news channels in India. Its slogan is ‘Sabse Tez’  which means ‘Faster than the rest’, in Hindi. It also has an English News channel called India Today. Their editor-in-chief  Rajdeep Sardesai is one of the most famous journalists in India. Sweta Singh and Anjana Om Kashyap are the faces of AajTak. India Today Group won 13 ENBA awards, Aaj Tak is India’s best Hindi news channel of the year 2018. They have 33.1M subscribers on youtube.

It is owned by TV Today Network and is one of the popular News Channels in India. Aaj Tak means “Till Today” and was launched in the year 1998. The headquarters is located in Noida, India. According to the recent survey, that was done Aaj Tak is one of the most famous news channels in India. It had won awards like Indian Television Academy Awards and Indian Telly Awards. It is a complete Hindi based news channel. Rohit Sardana quits Zee News; Moves to Aaj Tak India Today News Network.

Another famous Channel on the list, Republic Tv is new but is one of the most-watched news channels in India today. It’s sister Hindi channel is called Republic Bharat. They also have a YouTube channel where they upload their content in short snippets.

It is Co-owned by its Editor in chief, co-founder and majority owner Arnab Ranjan Goswami who also handles the channels Prime Time news. It’s TRP(Television Rating Point)  as of Aug 2019 is 1,62,789.