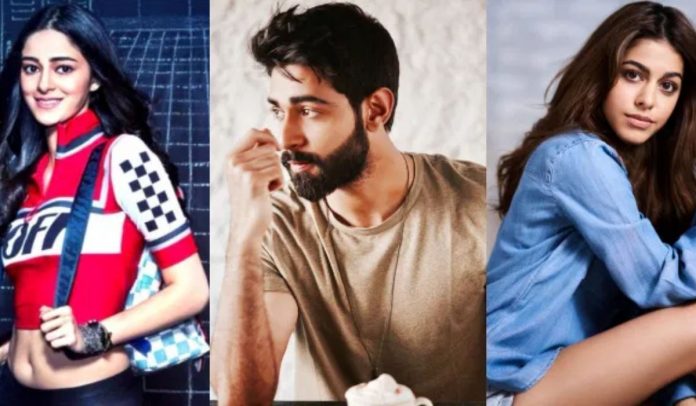 Star kids step in the industry radiating a lot of expectations among the audience.  Few star kids proved their worth in their very first film and some didn’t leave much of an impact and eyeing for some more opportunities to arrive. Here are the top 10 newcomer star kids who are on their way to bag successes like their parents.

Actor chunkey Pandey’s daughter Ananya Pandey did her debut with the student of the year 2 in 2019 under Dharma productions, her lead role in this film not only gave her fame but also gave her an opportunity to place the best female debut Filmfare award in her shelf. In the same year, she was seen in a comedy-drama named Pati Patni Aur Woh, teaming with Karthik Aryan and bhumi Pednekar, which turned out to be commercially successful at the box office. Currently, everyone is looking forward to her 2020 film, khaali Peeli, co-starring Ishan khattar.

Born in a royal family and surrounded by Bollywood biggies add some extra pressure before landing in Bollywood, but Sara Ali khan handled it all very gracefully. Saif Ali Khan and Amrita Singh’s daughter did her grand opening with Simmba and Kedarnath in 2018, co-starring Ranveer Singh and Sushant Singh Rajput respectively.  Beside giving two back to back hits she grabbed the best female debut award for the same. She was also seen in Imtiaz Ali’s film Love aj kal, in 2020, where she got paired with  Karthik Aryan, and their chemistry set the screen on fire.

Legendary actress Srivedi and renounced producer Boney Kapoor’s daughter, Jhanhvi was seen in Dhadak in 2018 where her on-screen chemistry with Ishan khattar looked like a dream and was visually soothing. She also received the best debut female award for the same. Jhanvi made a high benchmark for herself with her very first release. Currently, audiences are waiting for her upcoming projects to arrive.

Rajesh khattar and Neelima Azmi’s son, who also happens to be the younger brother of Shahid Kapoor, Ishan khattar is one of the most talented actors who proved his acting skills with his 2017 film beyond the clouds, which got him multiple awards. After this film, he was seen in Dhadak alongside jhanvi Kapoor , and bagged another award for this film.  In this short span, he proved his strength and grabbed multiple awards.  He would be seen in khaali peeli in 2020, co-staring Ananya Pandey.

Bollywood actor Sunny Deol’s son Karan Deol also tried to make it big in Bollywood with his 2019 debut pal pal dil k pas. Though the film could not live up to our expectations still we are hoping to see him flourish and perform better in his upcoming projects.

Sunil Shetty’s daughter Athiya Shetty got recognition and fame for her first film Hero, alongside Sooraj Pancholi. She received a Filmfare award for her debut. But unfortunately, her spark did not work much in her 2019 release  Mootichur chaknachur, opposite Nawazuddin Siddiqui. Athiya might be seen in a biopic named Hope solo where she will be seen as a footballer, and hopefully, she might get back to her track of success.

Actress Pooja Bedi’s daughter Alaya Furniturewala did her 2020 debut with the film jawani jaaneman. This comedy-drama stars saif Ali khan along with Alaya. Though it was a decent start for Alaya audiences are hoping more and waiting for her upcoming films.

Actor sumeet saigal’s daughter sayyeshaa saigal did her grand debut in 2016, in the film Shivaay, co-starring Ajay Devgan. Though she is not much seen in Bollywood films her debut was remarkable and loved by all.

Anil Kapoor’s son Harshvardhan Kapoor proved his acting skills in his 2016 debut Mirzya, for which he grabbed two awards.  In 2018 he was again seen in Vikramaditya Motwane’s film Bhavesh Joshi. His screen presence and acting skill is highly impressive for a beginner.  We hope to see him in any more projects.

Son of actress Bhagyasree, Abhimanyu stepped in Bollywood with his 2018 debut Mard ko Dard Nahi Hota. Which got him the award for the best debutante. His next film Nikamma, co-starring Shilpa Shetty and Shirley Setia is about to release in 2020. Hope he earns some more fans after his next release.