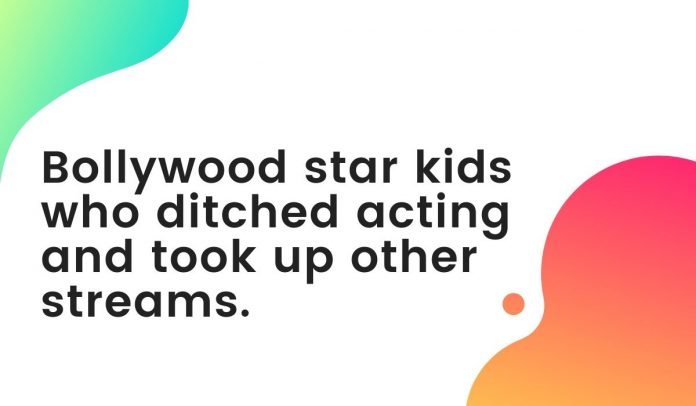 Sometimes we differ to follow the footsteps our parents leave behind for us and wish to create our own landmarks. Here are top 10 star kids who ditched acting and choose other streams.

Mahesh Bhatt and Soni Razdan’s daughter Shaheen Bhatt did not show much interest in acting unlike her younger sister Alia Bhatt. Writing being her area of internet shaheen contributed in a few scenes for jism 2 and Zeher. After completing her editing and film making course from London, she came back to India and worked in Raaz 3. Her love for poetry and writing got her another project in Bollywood called the son of Sardar where she was a co-writer. The writing bug inside her helped her to pen down a book titled “I’ve Never Been (Un)Happier” which got launched in the year 2019. Walking away from an acting career seems to be beneficial for her.

Iconic Bollywood couple Rishi Kapoor and Nitu Singh’s daughter Riddhima Kapoor didn’t walk on the roads of Bollywood following her parent’s landmarks, she chose to do something out of the league. After launching her own jewelry brand ‘R Jewellery’ in 2016 she established her own identity,  one by one success kept on coming in her way and she launched a clothing brand called “sam and friends ” in 2018. After grabbing several awards she managed to preserve her name in the list of top 25 entrepreneurs in New Delhi.

Being the daughter of Big B, that is Mr. Amitabh Bacchan and legendary Actress Jaya Bhadhuri,  Shweta decided to make her own fate, she kept herself away from acting and explored herself in other fields. Though Shweta modeled for a magazine called L’Officiel India and did some brand endorsement as well later on she drifted herself apart from the glam world and chose journalism and writing career professionally. In the Next-generation category she became the leader during NDTV profit in the year 2007. Shweta also launched her Novel, Paradise Towers in 2018.

One of the leading ladies in the fashion industry, Masaba Gupta is the daughter of actress Neena Gupta. Masaba did not walk on her mother’s footsteps but made her own ways. Masaba Gupta is one of the most successful fashion designers our country has. She has multiple showrooms all over India. She out of the box designs got her all the fame.  Her Hijab-saree designs to lift up the fashion quotient of the Muslim women were really thoughtful and inspiring. Gupta was also seen as a judge on MTV supermodel of the year, in 2019.

Bollywood Actor  Anil Kapoor’s elder daughter and Sonam Kapoor’s sister did not show much interest in acting and she found her job satisfaction in producing.  She produces films like Aisha, Khoobsurat, and Veere Di wedding and bagged a few awards for the same.  Rhea Kapoor’s fashion sense is also matchless as every time Sonam Kapoor admits that her stylist is her sister Rhea Kapoor and passes on all the compliments and credit to her sister Rhea behind styling her. Rhea’s love for fashion became more visible when she and Sonam launched their own fashion brand, Rheson.

Actress Raakhee Gulzar’s daughter Meghna Gulzar had a different set of interests.  The acting was never in her priority list. She started her career by freelancing for The Times of India. Her love for writing dragged her in the world of scriptwriting and direction. She directed some documentaries for Doordarshan.  She wrote a screenplay for the film Hu Tu  Tu in 1999. In 2002 she did her own film Filhaal which could not get her much success. After a long break, she did her comeback in 2015 with Talvar.  In 2018 she gained the pace and her film Raazi became a blockbuster at the box office which got her awards which she surely deserves. Her 2020 film Chhapaak featuring Deepika Padukone was highly appreciated by all.

Producer Boney Kapoor’s daughter and actor Arjun Kapoor’s sister Anshula Kapoor also stayed away from the limelight. After completing her graduation from New York she started working for  Economic Empowerment, she also contributed in a house building project in Romania.  Anshula grabbed the opportunity to work for one of the best companies, Google. After that, she shifted as an Associate Account Strategist in Haryana. In 2014 she flew back to Mumbai to work for another private company, but after months she left that job and started working as an Operations Manager in HRX owned by Hrithik Roshan.

Daughter of actress Sharmila Tagore, and sister of Saif and Soha Ali Khan, Saba decided to come out of her family tradition and make a career away from Bollywood. Saba Ali khan has an interest in fashion and designing and she ended up becoming a jewelry designer. Not only that, but saba is also a chief Trustee of Auqaf-e-Shahi which is a charitable trust formed by the royal family of the princely state of Bhopal.

Rakesh Roshan’s daughter and Hrithik Roshan’s sister Sunaina Roshan ditched acting and showed interest in producing.  She started her career by producing  Krazzy 4 in 2008 she also was a co-producer in Kites. Roshan also has an interest in writing and blogging so she opened a blog in 2018 named Zindagi where is shared her personal and health struggles.  She also published a book called “To Dad with Love”. Sunaina is currently handling her family film production house, Filmcraft.

Mahesh Bhatt’s only son and pooja Bhatt’s younger brother is a fitness freak. He is a gym trainer and trains artists to slip into different bodies and shapes as required for their films. He trained Amir khan to go through the transformation for the movie  Dangal. Rahul was also seen on Big Boss 4 in 2010.

Family Heirlooms – Picking the Best First Ring for Your Daughter