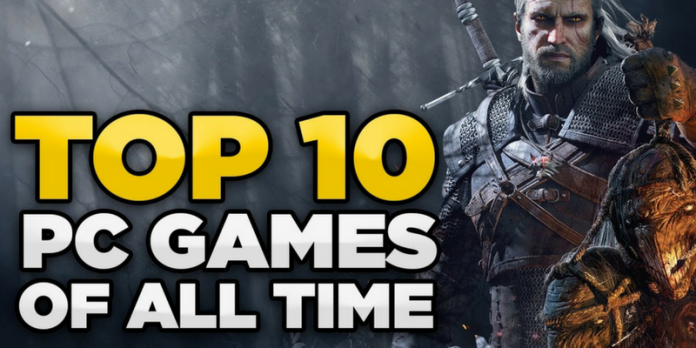 “Childhood” a time when kids enjoyed their time mostly by playing PC games has been one of the most memorable platforms for most of us. As everything has a struggling stage, in the beginning even the World of computer games started from something really small and now is likely enjoyed by kids from age 12-30. The popularity of digital downloads and online multiplayer has brought back gaming into the spotlight in the last few years. It is considered to be one of the most dynamic gaming platforms and from the last two decades, we have seen some of the best PC games of all time.

In this list, we have put together the top 10 PC games of all time, that was released from the early ’90s to date. Laptop games have a lot of gaming history as it has seen almost two decades, but some way or the other this list has earned its place due to the game’s graphics, popularity, and level of engagement.

10 best PC games of all Time

The original first part Mass Effect was an incredibly good game as it was an entry to one of the most beloved sci-fi franchises ever. It was compared to Star Wars that introduced a unique, and compelling universe with a highly focused story.

When it comes to Mass Effect 2 the game had crossed everyone’s expectations. With an improvement in graphics, it was a game that was enjoyed from start to finish. This series apart from the 3rd part of the game was considered to be an all-time hit.

Grand Theft Auto series has always seen evolvement when it comes to quality gaming. The series would be a part of any one’s list of top rates pc games of all time. The late 2000s had seen San Andreas changing the phase of PC games.

It is still considered to be a benchmark when it comes to open-world gameplay. Though GTA IV was a step forward in terms of graphics and narration, nothing could beat San Andreas for its creativity and freedom.

The game that had kick-started the indie revolution in the last half-decade is considered to be one of the top pc games in the world. It gives players unlimited freedom when it comes to creating impressions. This game holds out to be the strongest when played online with others and completing a building project with friends is one of the greatest experiences in the world of gaming.

Though there were few improvements that ad to be brought up, in spite of that Minecraft remains one of the best PC games in the list.

A game like Bioshock has one of the most surprising elements i.e from the storyline to the main character this game offers you something special at every phase. The creaking glass tunnels and insane inhabitants gave the city a very creepy and tense look.

It is a tour de force narrative. It is one of the best examples of a well designed FPS. Last year we had seen Bioshock Infinity pave its way but could not quite meet up to the expectations of the first part. A remastered version is also available.

Even after six years of its initial release, Skyrim is considered to be one of the best pc games of all time. With a high selection of mods and high resolution, texture makes the game one of its kind. It offers almost 100 hours of gameplay.

It was awarded as the 2nd best PC game of 2011, with no 1 discussed game in the same year. It had garnered a lot of appreciations due to its massive story and graphics. It is originated from Bethesda Studios. Another hit series when it comes to consistency on being the top.

This game has been making money than any other video game of its time. World of Warcraft still maintains its mark in the MMO genre, even after its original release after a decade. Almost 100 million accounts have been created in their lifetime. This game has been both well praised for its qualities and also a gameplay that encourages players to group together.

The game’s cartoony aesthetics also paved its way and was considered to be a wise decision, amongst their realistic looking contemporaries. Players still continue subscribing to the game mainly because of its community. It is a player-driven history which has a breathtaking experience while working for the community.

When it comes to Valve’s Sci-fi classic we would never dare to miss it. Half-Life 2 introduced one of the unique game engines of all time which had surpassed its previous predecessor in all ways. Released almost 10 years ago, Half-life 2 is a good looking achievement for a 3D title that had gone straight for realism.

With a great physics system, which was used for object destruction with some creative puzzles. The main thing about this game was people would be engrossed in it completely which had made it one of the top pc games in the world.

Well, what can I say about the GTA franchise, with over the top storyline and character framing GTA vice city is considered to be one of the best PC games of all time. With Tommy Vercetti playing the lead role and the story showcasing his life and missions in the city of vice city.

From amazing weapons, tools, and bikes this game gives a completely free tour throughout the city. The game had released in the year 2003 and is still is one of the most popular games in the GTA franchise as well as the PC world.

Baldur’s Gate is one of the top 10 pc games of all timeand has stuck on to its true name. The game is based on Dungeons and Dragons is still remembered as one of the best PC games of this Millenium. Though highly polished, this game was easy to learn which made even young games get involved in it.

This game is mainly known for its story with a beautifully designed combat system. Rather than the long battles that were seen in other games, Baldur’s Gate 2 encounters were deadly and fast with planning and preparation that leads to the battle.

This game as always been on the list of top pc games in the world.It is one of the most anticipated games to ever hit PC. This game is 10 times more fun with the PC’s high graphics with a smooth 60 frames per second gameplay. After completing 30 hours of a campaign there is an overflow of game content to enjoy here.

GTA V has always been on top in The PC world and is enjoyed by players in the PS4 genre as well due to its high graphics. The Doomsday Heist and a radio station hosted by Frank Ocean are some of the unique aspects that were seen in this game.