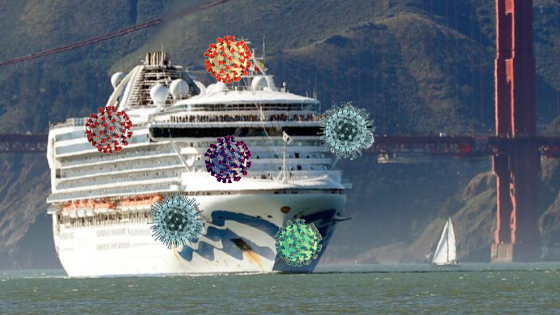 Grand Princess is a Grand-class cruise ship owned by Princess Cruises, at a cost of approximately US$450 million. She was the largest and most expensive passenger ship ever built at the time, The Grand Princess was the best of the Princess cruises fleet until the Royal Princess in 2013.

Usually, the Grand Princess is based year-round in San Francisco, California, sailing to Alaska, Hawaii, the Mexican Riviera, and the California coast.

In March 2020, it was reported that two passengers of the ship’s cruise to Mexico of 11–21 February 2020, had contracted the COVID-19 coronavirus disease and one of them had died.  After the news spread the cruise ship now returning from Hawaii was forced to stay offshore right as it returned to San Francisco. The ship has around 3,533 passengers aboard (2,422 guests and 1,111 crew members, with 54 nationalities), Some of whom were exhibiting symptoms similar to that of the CoronaVirus.

The California National Guard’s 129th Rescue Wing dropped off and retrieved coronavirus tests, while the ship was stranded near the coast of California. Vice President of the United States of America  Mike Pence said during a Coronavirus Task Force press briefing that of the 21 people who tested positive, 19 were crew members of the ship and two were passengers, while one of the tests showed to be inconclusive.

It was announced that Grand Princess will be allowed to dock in the port of Oakland on 9 March, and eventually allowed to disembark, starting with those in acute need of medical treatment.

As of now, the passengers on board are already quarantined, they have been told to not leave their rooms. Crew members are to be held on the ship for quarantine and treatment, and all disembarking passengers will be tested for the coronavirus and will be held in isolation at a federally operated facility. The ship looks absolutely deserted, as most of the passengers are sticking with the rules and preferring to stay inside their respective rooms.

Many passengers say that they are being taken care of well by the crew of the ship. It’s been reported that people have been given crossword books and packs of cards to pass the time. And for food, each day passengers are given a paper with the list of food options available. Lunch and Dinner are served via Room service.

Another Princess-owned Grand-class ship, Diamond Princess, also had experienced an outbreak of the disease in February 2020, and had been quarantined for nearly a month in Yokohama, Japan; at least 696 out of the 3,711 passengers and crew had contracted the virus, and six of them had died.

Avoid going to crowded places and put off international travel for a while. Stay safe and wash your hand regularly!