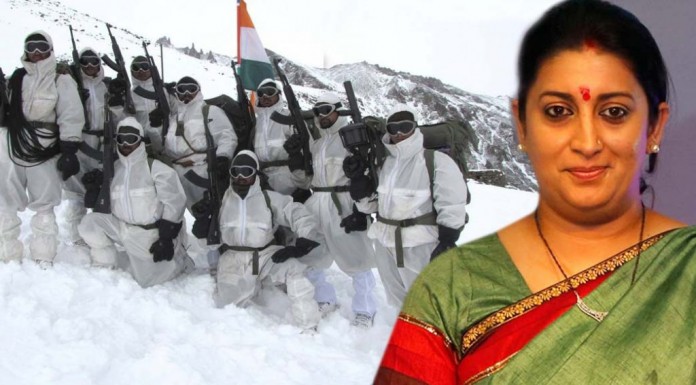 This Rakhi is quite special for  the Indian Armed forces as many Women Ministers and M.P’s  as they are  about to visit border area’s  to celebrate with soldiers. Among them, Union Textile Minister Smriti Irani will be going to Siachen Basecamp to celebrate Raksha Bandhan with Jawans, who are selflessly serving the nation.

Smriti Irani  is the First women Minister to visit Siachen and Army is planning a Grand welcome for their Sister Irani.Defense ministry approved her visit to the  unforgiving Siachen Glacier.

Sources said  that apart from Ms. Irani, There are  eight other women ministers from the  BJP who  will  also travel to the border areas in the North East, Rajasthan, and Kashmir to celebrate Raksha Bandhan with our jawans.

External Affairs Minister Sushma Swaraj, Water Resources Minister Uma Bharti, Women and Child Welfare Minister Maneka Gandhi are among the list and will visit base camps in the border areas  and interact with the soldiers.

This move has delighted many  Army Officials and brought  joy among  soldiers who had visited their family for a long time.