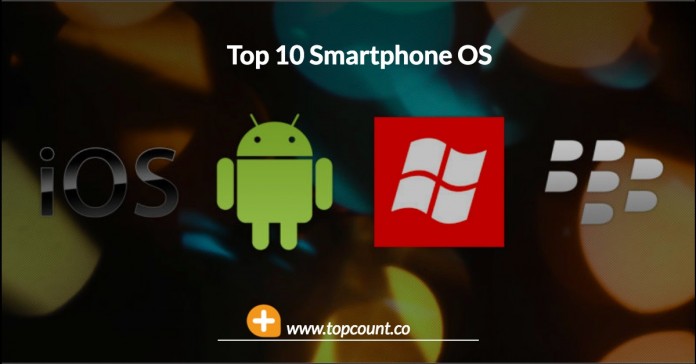 Best Smartphone Operating Systems (OS): To control anything and to put it to correct use you must have sufficient information about it. You may know the names of various brands selling smartphones, but very few have any idea about the operating system behind it. Knowledge of the operating system helps you to select the platform that will be most useful to you. The smartphones run on various OS, but few are most popular and functional. Here are top ten operating systems that smartphone companies use in their devices.

Windows are the most familiar and reliable OS in the world of computers. But the operating system is not very popular with mobile users, who use the Android or iOS. Some people, however, still prefer using the Windows, due to the ease of operation. The advantages of the Windows Phone are that it does not take up a lot of RAM.  You can use powerful apps and also play games with ease in this OS.  A user-friendly and colorful interface introduced in Windows7 helped it to regain some lost ground.

With the power of Google behind it, Android is by far the most popular OS used by smartphone manufacturers. The ease of use, the immense possibilities of customization and minimum restrictions that characterize the Android, are a few reasons behind its popularity with the smartphone and app developers. Besides, you can get it really cheap.  The smooth appearance and the efficient functioning of the Android are other reasons behind its success.

The Apple OS, exclusively employed in the Apple devices, namely the iPhones and the iPads.  This OS lays more stress on performance rather than the looks. The look of the OS remains the same as in 2007. The Apple has fewer features than the Android and is less responsive to other platforms, besides being very expensive. However, some people swear by this operating system.

The Blackberry is also a close source operating system. No manufacturer can lay hands on it. The OS is exclusively used in the Blackberry smartphones and is quite different from other OS. The interface and the design of the OS are typical. A trackball that allows you to move on the menu and the qwerty keyboard are other unique features of this operating system.

The Meego is an operating system, created for a mobile platform,  is usable in many electronic devices. No matter what device you use it in, it will have the same core, but the interface changes in agreement with the instrument. The Moorestown Tablet PC runs on this operating system. The high compatibility of any device is the plus point of this OS.

The Symbian is an OS Nokia uses in most of its low-end mobile phones. This is not a closed source OS, but a company must take permission from the developers before using it. Thea upgraded version of the Symbian can run on the smartphones. The user-friendly character and the superb design of this OS make it the ideal OS for use in any phone.

The mobile version of the Ubuntu OS is the Ubuntu Touch. The touch user interface of this OS is based on the QWT-5. This OS uses many other software frameworks that were initially built for the Meego and Maemo. The flexibility of the OS allows its use in Android phones.

Microsoft developed this OS for use in its smartphones and pocket PCs. Although it gained popularity with the user in the early years after its introduction, its popularity declined after the coming of Android and iOS. The company does not produce ant devices with this OS after it stated the developing the Windows Phone.

Many other operating systems are available out there. New and old companies are developing operating systems that can go with all kinds of mobile devices. Going by the popularity of an OS is not the right decision. You must buy a smartphone that has an operating system that can meet your demands and requirements.