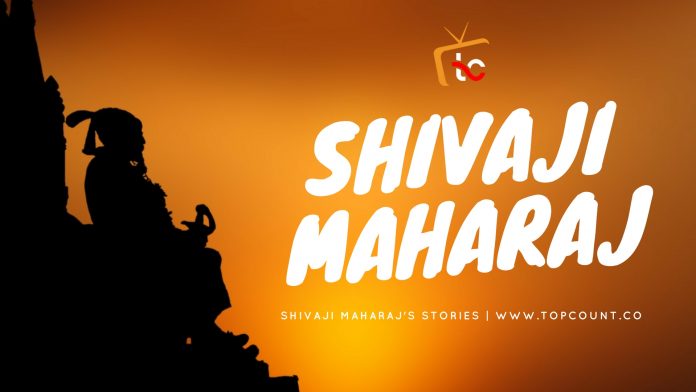 Chhatrapati Shivaji Maharaj – a name that dwells in the heart of every Maharashtrian!

As Swami Vivekananda rightly said, “Shivaji was a peerless hero, a pious and God-fearing king and verily a manifestation of all the virtues of a born leader of men described in our ancient scriptures. He also embodied the deathless spirit of our land and stood as the light of hope for our future.”

Even today, the stories of Shivaji Maharaj’s heroism fill the hearts of every person with a sense of pride and honor, the values he wanted to inculcate in his men.
Some of the highlights of his legacy are re-stated below.

Shivaji Maharaj and his army fought to overthrow tyranny of the unjust Adilshah of Bijapur and establish “Hindavi Swarajya” (self-rule of Hindu people). In an attempt to put down this regional revolt, Adilshah sent Afzal Khan, an experienced general and veteran to destroy Shivaji.

With the aid of a superior army, marched Afzal Khan, desecrating Hindu temples at Tuljapur and Pandharpur hoping to draw Shivaji to the battle field and destroy him and his small army. But instead of falling to this trap, Shivaji Maharaj sent Afzal Khan a letter, pretending that he was afraid of the mighty general and requested a meeting at Pratapgad to further negotiate.

On November 10, 1659, the two met in a hut at the foothills of Pratapgad, armed only with a sword and attended by a follower, as decided in the agreement earlier. But Shivaji knew that a foul person like Afzal Khan cannot be trusted as he had executed another ruler in a same way before. Hence, he wore an armor beneath his clothes, as a protection, concealing his “tiger-claw” and a dagger.

When Shivaji entered the hut, Afzal Khan got up and welcomed him with a hug. As predicted by Shivaji, Afzal Khan then attacked the back of Shivaji with a dagger but it was stopped by his armor. Shivaji then, quickly used his tiger-claw and inserted it in the stomach of the mighty Afzal Khan and tore it apart, thus killing him and serving a huge blow to the Adilshahi empire.

The defeat of the mighty Afzal Khan by the hands of Shivaji Maharaj was rewarded by an immense increase in his prestige and the faith of Marathas in him was re-affirmed.

Shaista Khan was an uncle of the Mughal emperor Aurangazeb, who was sent by him with a well equipped army of around 150,000 soldiers to eliminate Shivaji Maharaj. Shaista Khan and his huge army invaded the Maratha territory and seized the city of Pune, establishing his residence at Shivaji’s palace of Lal Mahal.

Shivaji Maharaj decided to retaliate by attacking Shaista Khan right in the middle of his own camp. In April 1663, followed by a band of around 200 followers, Shivaji infiltrated Pune, using a wedding procession as cover and entered Shaista Khan’s quarters, killing those they found there. The startled Shaista Khan was badly wounded as Shivaji Maharaj severed his three fingers with his sword. His life was saved as the lamps in the room were put out by one of his women.

Upon realizing that his enemies are fully awakened, Shivaji promptly gathered his men together and quickly left the camp by a direct route, while the Mughals fruitlessly searched all over. As per the plan, Shivaji and his troops disguised as their enemies and gracefully left the area.

The planning and execution of this attack was so well that it created a belief in Mughals that Shivaji possessed some kind of magical powers. This story of the superhuman deed of Shivaji Maharaj spread across the entire country. The embarrassed Mughal emperor Aurangazeb punished Shaista Khan by transferring him to Bengal.

After the attack on Shaista Khan, Shivaji Maharaj captured various Mughal ports in Maharashtra and sacked the richest one in Surat. Enraged emperor Aurangazeb sent Mirja Raja Jai Singh with a huge army to defeat Shivaji. Jai Singh’s forces captured many Maratha forts, thereby forcing Shivaji to sign a treaty with Aurangazeb to prevent the loss of more forts and men. In this treaty, known as the Treaty of Purandar signed on 11th June 1665, Shivaji agreed to give up 23 forts and pay a compensation of 400,000 rupees to the Mughals.

After the treaty, Shivaji was invited to Agra by Aurangazeb, along with his son Sambhaji. Shivaji agreed and left for Agra with his son and a few followers. After reaching the Mughal court in Agra, Aurangazeb made Shivaji stand behind the military commanders of his army intentionally disrespecting him. Shivaji Maharaj took this as an offence and stormed out of the court, and was then put under house arrest by Aurangazeb.

It didn’t take long for Shivaji Maharaj to plan his escape and again, it was perfectly executed. He faked severe illness and requested to send his contingent back to Deccan, to ensure his army’s safety. He began sending daily shipments of sweets and offerings to various saints and fakirs of Agra. This continued for several weeks and the guards began to avoid checking these shipments. Shivaji and Sambhaji hid in two of such shipments and escaped the emperor’s house arrest and fled to Maharashtra disguised as saints.

After returning to Maharshtra, Shivaji Maharaj spent some time in organizing his government and soon launched a major offensive against Mughals. He recovered major portions of the territory surrendered to Mughals just in a span of four years. He continued fighting the Mughals fearlessly with the sole objective to establish Hindavi Swarajya!


There are endless stories about Shivaji Maharaj which make him one of the greatest kings in the history of India. Even after his death, the people of Maharashtra continued to fight Moghuls even when Aurangazeb himself came to conquer the land. This was only because of the foundation of Swarajya laid down by Chhatrapati Shivaji Maharaj.