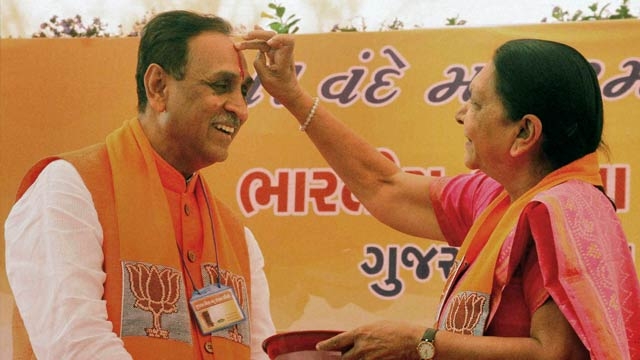 It came as  a surprise to the crowd  when  BJP state unit Chief Vijay Rupani,was on Friday was chosen as the new chief minister of Gujarat to succeed Anandiben Patel. Nitin Patel who was considered a sure pick was made Deputy Chief minister. This is  the first time that Gujarat will have a deputy chief minister.

After 45 minutes long meeting, which was supposed to  start at 4pm began two hours late, apparently due to the  differences between top leader’s Amit Shah and Anandiben Patel. Vijay Rupani was backed by Amit Shah several times in the meeting despite Anandiben’s defiance and rejection of Vijay.While, Anandiben endorsed Nitin Patel for the top job of the state.

There were  heated arguments between the leaders and Anandiben threatens Shah to leave the meeting midway but Mr. Shah did not budge from his backing his candidate.As the clash continued V.Satish stepped out and briefed the situation to PM Narendra Modi.

After a long delusion, central observer Nitin Gadkari informed the media about Vijay Rupani appointment as the new CM in the presence of Ms. Patel, Mr. Rupani, and Nitin Patel while Mr. Shah skipped the press meet and Anandiben refused to talk .

The 61-year old Rupani was elected as an MLA  from Rajkot West in 2014 elections.He  is currently holding  transport, water supply, labour and employment portfolios in Anandiben’s cabinet. He belongs to Jain Bania community and  Rupani’s  candidature is being seen as a way to solve the conflict between the Dalit and Patidar community.

He is been assigned as Gujarat’s Head and allotted the role of  leading BJP to retain its political base. Few seniors have immense belief in Rupani to care of the issues currently in the state.

While Anandiben Patel resigned on Wednesday and submitted the resignation to Governor O.P Kohli.