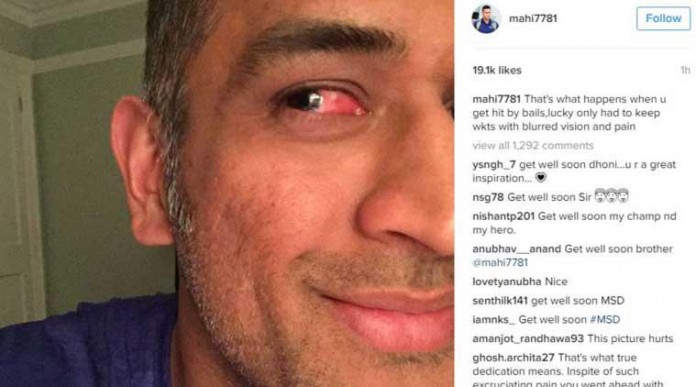 Accidents in the cricket field have created news in the past but the recent accident that occurred during the T 20 match in which India was playing against Zimbabwe calls for an action. The captain of the Indian team, Mahendra Singh Dhoni suffered a blow in his eye when he was hit by a flying bail. This incident has created a lot of stir as experts have expressed doubts whether Dhoni will continue to render the same performance in future. Mahendra Singh Dhoni has been a consistent player and one of the most successful captains of the Indian team.

Whether it is a purported incident or not is a different discussion but the damage in his eye cannot be ignored when the Indian team needs his leadership for the upcoming matches. In this match, the Indian team went to bat first but was still struggling to make a big score during the middle overs. The captain of the Indian team suffered the blow when he came down to the track to take the wicket of Donald Tiripano, the pacer of the other team. Incidentally, Dhoni managed to score nine runs from 13 balls in this match. However, Dhoni could lead India to a three-run win in this match. While such incidents are common in the cricket field, it is hard to say whether repetitive incidents can affect the career of more cricketers in the long run. In fact, such incidents have affected the career of several cricketers but the question is whether the same fate will struck Dhoni and it will be hard to get him back on the field.

Special brief about the match

The captain of the Indian team suffered from the accident in the 16th over of the match when the Indian team was playing against Zimbabwe. Despite the incident, Dhoni managed to keep the wickets during the second innings. The zeal of a player has come alive when Dhoni decided to continue with the match regardless of the accident which could have caused permanent damage to his eye. Fortunately, the injury was not too deep to affect the winning streak of the Indian Team and the best part is that India managed to win the match against the opponents by three runs which is a motivating factor for the budding cricketers.

Eye injuries and things to do

Eye injuries can lead to serious problems and ignoring them can cause further complications. Mahendra Singh Dhoni is one of those cricketers and the blow that he received in his eye during the match could have left him impaired and put an end to the career of one of the most prominent cricketers in the history of India. Under such circumstances, Dhoni must have undergone appropriate treatment to analyze the nature of the injury and how the blow can affect his eye and career. When eye problems get out of control, doctors advice hospitalization and prolonged treatment can probably lead to cure.

Career of the captain

Being the captain of the Indian Team, the injury that he has suffered in his eye must have evoked discussions about his career or whether he will continue to render similar performance in future. It is hard to predict and the decision is best left to the doctors that have treated him for this problem. Often doctors suggest washing the eye with saline or cold water and cold compress to reduce the swelling in the eyes. However, the redness may still remain as bleeding continues from the vessels in the eyes. What can the fans expect about h performance of the Indian captain during the upcoming matches and series that India will play against the opponents? The captain must take the necessary steps to get proper treatment for his eyes as his fans await the results.

Injuries in the cricket field

Injuries that take place in the cricket field can have an everlasting effect on the career of several players and such incidents have been noted in the past. Although the nature of the injuries differed in most of the cases, it is time to find out whether Dhoni can come out of this mess and continue to motivate his team for better performances, In fact, cricket lovers are waiting to bless the captain and wish him a speedy recovery.