If you have bought a calendar with pictures of famous tourist sites of India like the Taj Mahal in Agra or Golden Temple in Amritsar, then there is a good chance that you might have seen the picture of “Stone Chariot (Hampi)”, which looks just like the below picture. 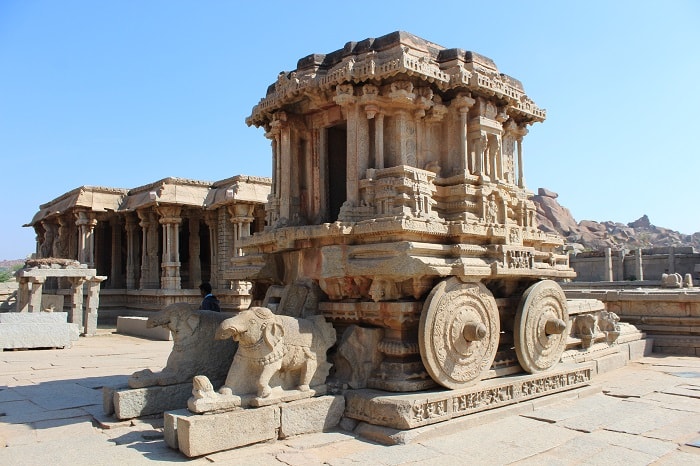 This stone chariot is in Hampi, which was the capital of Vijayanagara Empire, founded in 1336 AD, and it ended with a sad end in 1646 AD. But thanks to restoration work of more than 80 years, today Hampi, is rated as top 10 tourist sites in India.

In this article, I’ve presented 11 iconic monuments from Hampi, which are just stunning and will force you to visit this heritage city, on your next holidays. So, let’s start with: 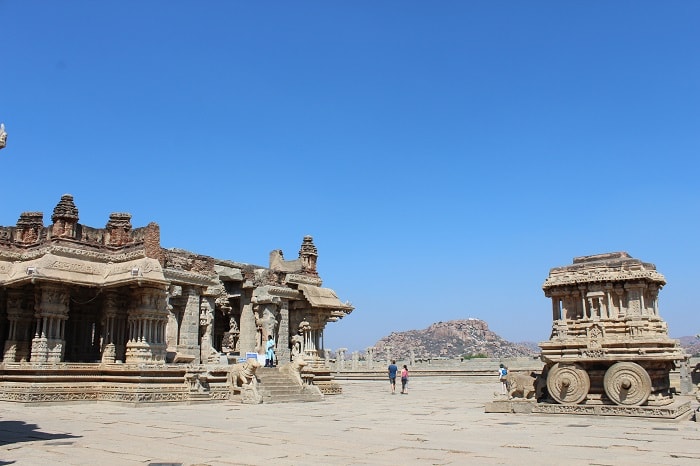 Vittala or Vitthala is a form of Lord Vishnu, and this temple is considered as one of the best sites to explore in Hampi. The temple has four gates and one the southern side of temples is the beautiful Stone Chariot, which I mentioned above.

Apart from this, there is the Hall of musical pillars, meeting rooms known as mandapas and the whole complex is a living example of excellent craftsmanship which prevailed during 15th and 16th century India. 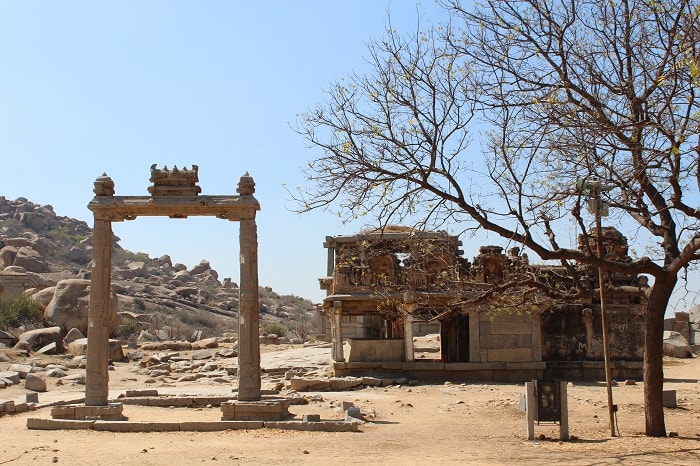 On the eastern side of Vittala Temple, there is a 5-meter-tall, two granite pillar, which is a balance scale mentioned as “The King’s Balance.“

At many festivals, the King of Hampi uses to come here and weight himself with gold, jewels and precious stones which were later donated to priests. It’s said that the local priest uses to prepare high-calorie diet so the King’s might get a bit heavier on the scale. 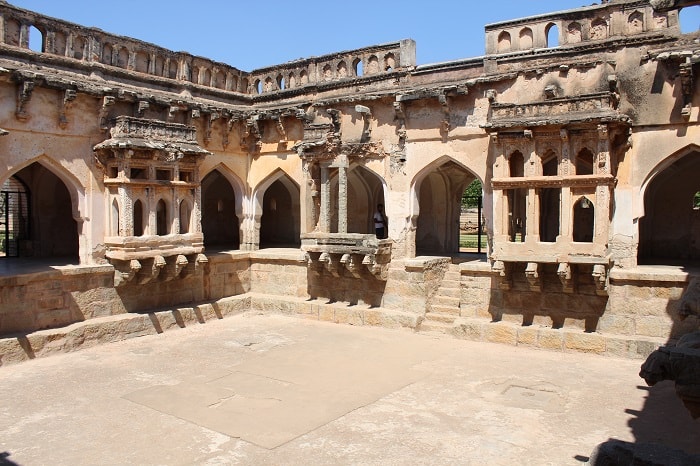 Third in my list of 11 iconic sites to see in Hampi is Queen’s Bath. Well as the name suggest, Queen’s bath was a pleasure place for the King and Queens of Hampi who use to come here to enjoy a lavish bath. Once you enter this complex, you will see a small private pool in the middle and balconies built all around the pool. More like a 15th century private Spa. 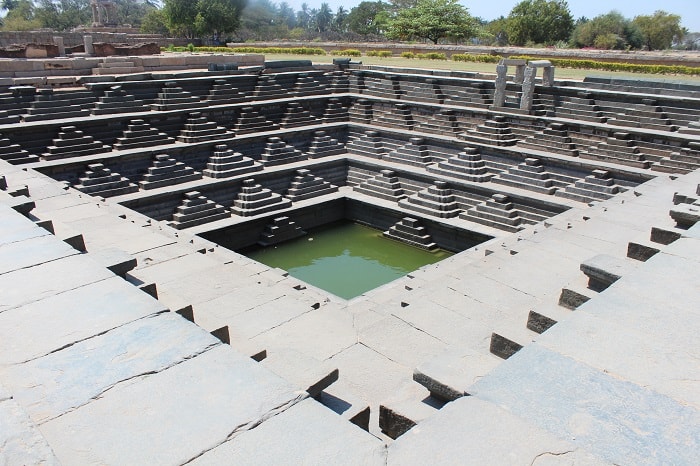 Pushkarani is a Kannada term for Stepwell, also mentioned as Baori or Baoli in northern and western India. It’s believed that Krishna Dev Rai, the most famous King of Vijayanagara Empire, built a drainage system, to make sure that there was never a shortage of water in Hampi.

A connection of stepwells or pushkarani’s were made all over Hampi, which can provide water even if there was a decade-long drought. Hampi Pushkarani, is one of the most well-maintained stepwells and was only used for temple ceremonies, and it’s worth visiting, especially for a Stepwell Traveller like me. You can find more on Ancient Indian Stepwells at my travel blog. 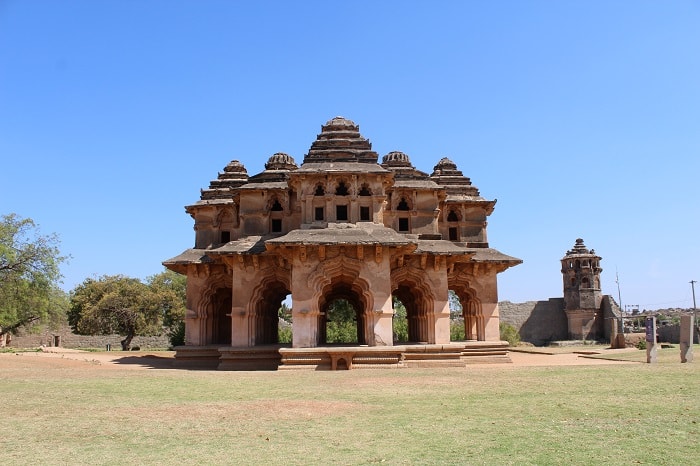 Lotus Palace or Lotus Mahal is a two storey structure, of Krishna Devaraya’s first wife. The architecture of Lotus Mahal was built in such a way that temperature inside the palace always remains well below than the temperature outside.

The ceiling and balcony of this palace are quite similar to Lotus bud, from where water use to fall regularly on curtains hanging all across the palace, working as a natural air conditioner. A unique example of Indian architecture and natural cooling system. 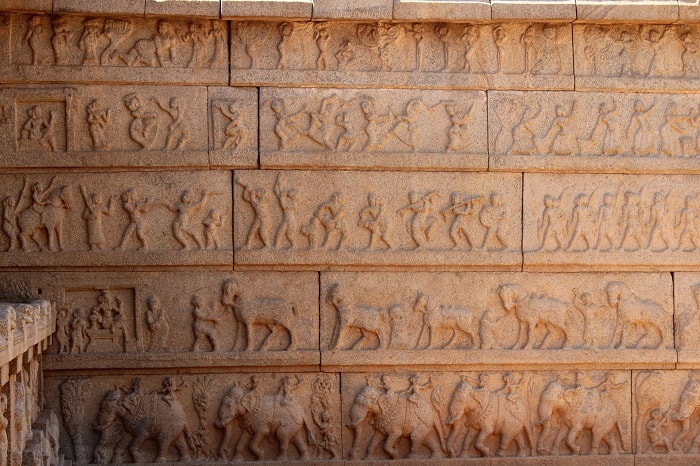 Hazararama Temple is dedicated of “King Ram” who’s also an incarnation of Lord Vishnu. When you enter this 15th-century temple, you will see that many statues are carved out on the walls like a storybook.

These walls have depicted the whole scenes of Ramayana, Mahabharata & a few other Hindu mythological stories. The whole temple will give you a feeling that you are walking into a picture library, rather than a holy site. 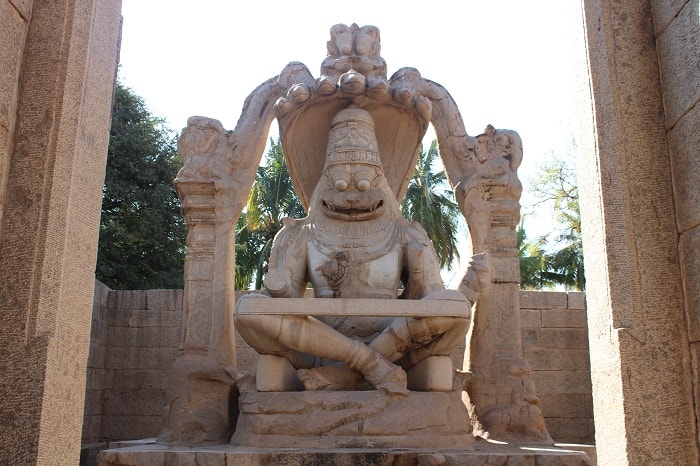 Lakshmi Narasimha is 6.7 meter tall monolithic statue (carved out from one piece of rock) built by King Krishna Devaraya in 1565 AD and is a one of three must visit monolithic statues in Hampi.

Narasimha is an incarnation of Lord Vishnu which half men & half animal and he came to earth to kill Hiranyakashipu who had a blessing from Lord Brahma that no man or beast could kill him.

As Narasimha was neither a man nor an animal, he killed Hiranyakasyap and saved Prahlad, Hiranyakasyap’s son and a follower of Vishnu. 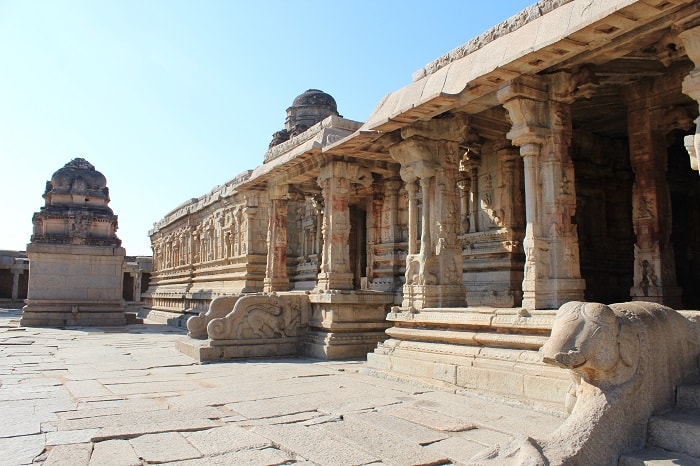 Sri Krishna Temple was built by King Krishnadevaraya in 1513 AD, after his victory on Udayagiri (current Orrisa). And to celebrate this victory, Krishnadevaraya, who was also a follower of Lord Krishna, brought a statue from Udayagiri and established in this temple.

Along with this temple, a market was built, where one could buy precious gems. Today, the same statue has been placed in Chennai Museum as the whole complex was destroyed in 1565 AD when Bahamani Sultans looted Hampi. 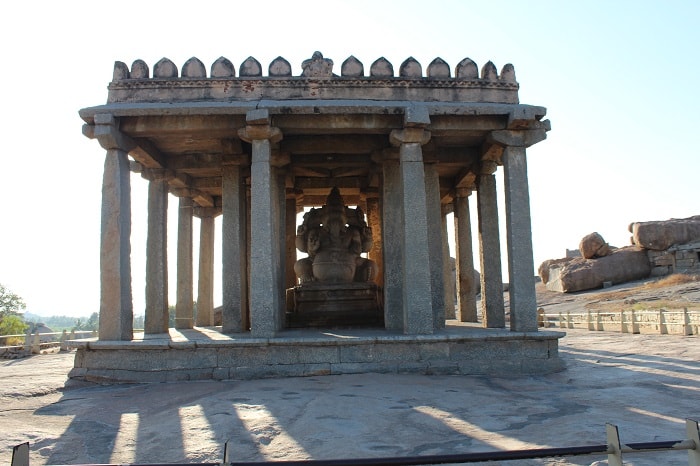 Sasivekalu Ganesha is a 2.4 meter tall, beautifully built monolithic statue of Lord Ganesha, constructed by a businessman from Chandragiri (now in Andhra), in 1506 AD.

As per my guide, the Chandragiri trader had a great business in Hampi and to celebrate his successful venture; he built this state of Ganesha, where he is sitting on a lotus flower, and his belly is tied up with a snake.

There is a story that Lord Ganesha love to eat laddu and one day he ate so many of these tasty laddus that his belly was just going to explode. So, Ganesha tied his stomach with a snake, and this scene is manifested in Sasivekalu Ganesha. 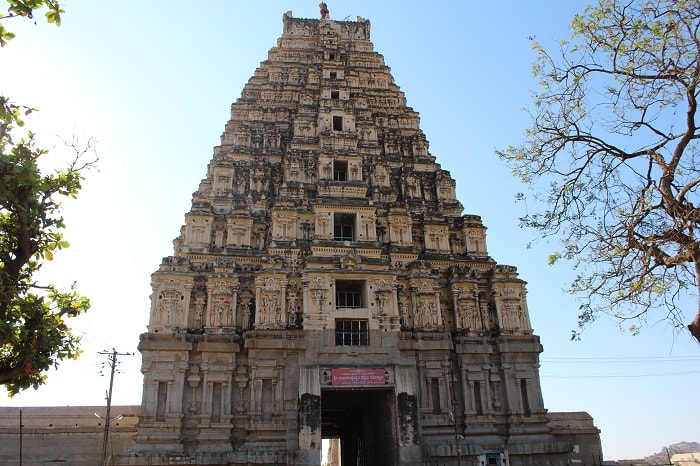 The only temple in Hampi, where religious ceremonies take place is Virupaksha Temple.

Sadly, there are dozens of temples in this ancient city, but all of them were destroyed in 1565 AD when Bahamani Sultans attached Hampi and ripped all of its beauty,

Virupaksha Temple was redeveloped after the 1565 AD attacks, by the Hoysala and Chalukyan rulers.

Then temple entry gate has 11 floors, and there is a real elephant at the main entrance gate, who is trained to bless the people with his trump.

Cameras are not allowed inside the temple complex, but the still the exterior of the temple is breathtaking and thus Virupaksha Temple is one of 11 iconic places to see in Hampi. 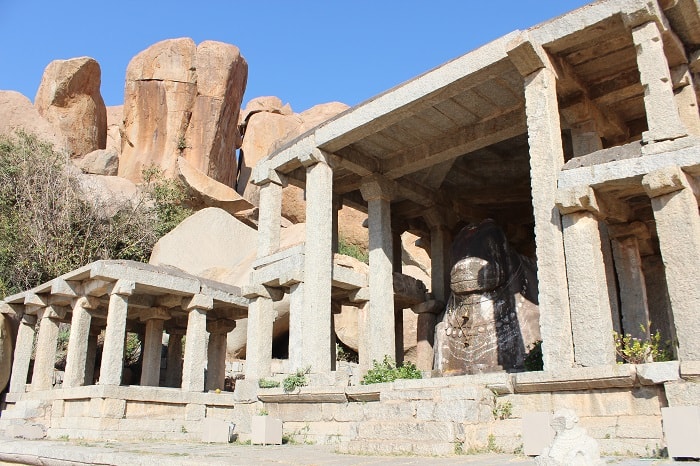 In India, you will always find a statue of a bull at a Shiva temple and similarly, in Hampi, Virupaksha Temple, which is dedicated to Shiva, has an enormous monolithic state of a bull (Nandi).

The distance of the temple entrance from Nandi statue is 1 km, and in between, you will notice many shops type structure, which is “Hampi Bazaar.”

The view of the whole temple complex from Nandi bull statue is stunning and forces you just to imagine how glorious was this kingdom of Vijayanagara, which created a correct fusion of religion, commerce, and strength.

Though today, only the ruins of the empire is visible on the surface, still Hampi is an iconic attraction of India and has also been awarded as a UNESCO World Heritage Site.

You can also check more images of Hampi, at my Instagram a/c, marked as #JatininHampi

A Packing Guide to Follow for Your Next Trip to Ireland