Language is the bond that connects us together. It represents our ties to tradition, and our links to our ancestors. We live in a world of a billions who between them, speak around 9000 different languages and dialects. Here are some interesting facts about language:

1. Babies That Suffered For Science

More than 2500 years ago, two babies were kept in isolation for at least two years in a cruel experiment aimed at tracking down the world’s first language. The experiment was carried out by an Egyptian pharaoh, Psamtik I, who ruled from 663 to 609 B.C. He believed that, without anyone to copy, children would instinctively talk the world’s “original language”. So he put two newborn babies of poor parents into solitary confinement.
A shepherd was given the job of looking after the babies, but Psamtik insisted that nobody should speak in their presence. When, after two years, the shepherd reported that the children had begun to repeat a sound like “bekos” – the Phrygian word for “bread” – Psamtik concluded that Phrygian was the oldest language. But he overlooked the fact that “bekos” sounds very much like the bleating of sheep – something the children had often heard. So the experiment proved nothing.

The earliest known examples of writing are forms of picture writing found in parts of the Middle East and southeastern Europe. The pictures – such as a foot, which represented the idea of walking – were drawn on the clay when it was soft. The tablets were then baked in the sun and many of them have been found in what are now Iraq and Iran. The tablets – the earliest of which date from around 3500 B.C. – mostly record land sales, business deals and tax accounts. Symbols from this period have also been found on clay tablets in Romania.
In addition, archaeologists have also found even more ancient tokens at sites in the Zagros mountains of Iran. The tokens are marked with symbols which appear to represent numbers and specific objects such as animals and garments. The tokens date from about 8500 B.C. – some 5000 years before the accepted date for the invention of writing. But scholars are divided on whether the symbols are a form of artistic decoration or whether they qualify as the beginning of written language. 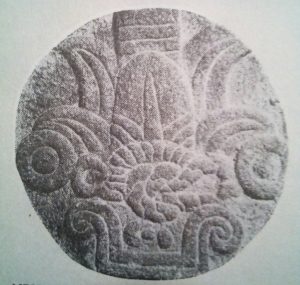 Message in Stone: Primitive language used pictures – sometimes stylised – to convey ideas. This Central American carving, or glyph, is the symbol for grass.

3. Children Who Invented a Language

In 1880, thousands of immigrants from Europe and Asia were brought to Hawaii, to work in the island’s new sugar industry. The result was linguistic chaos, because the immigrants – mostly Chinese, Japanese, Korean, Spanish and Portuguese – could understand neither the largely English-speaking owners of the sugar plantations nor the native Hawaiians.
At first, a crude pidgin English emerged as each group struggled to make an sense to the others. But by 1910 – in other words, within a single generation – a remarkably sophisticated language had developed. Now known as Hawiian Creole, the language included ready-made words from all the original languages in the islands’ mix, but it’s rules of grammar bore very little resemblance to any of them.
Hawaiian Creole’s astonishingly rapid evolution was studied in detail by Derek Bickerton, a professor of linguistics at the University of Hawaii. And he came to the conclusion in his book, “Roots of Language”, that Hawaiian Creole had been invented entirely by children at play. Only the children could have done it, he said, because there was no time for their parents to have learnt the new language and passed it on. Indeed, he points out, their parents did not understand Hawaiian Creole when it first appeared. They had to learn it from their offspring.

Boys undergoing initiation rites among the Warlpiri tribe of Australian Aborigines learn to speak a special upside-down language. Called Tjiliwirri – meaning ‘funny’ or ‘clown’ – it expresses every idea as its opposite. Instead of saying, for example, “You are tall”, a boy speaking Tjiliwirri would say “ I am short”. And instead of saying “Give me water”, he would say “ I withhold water from you.”

Children left in the wild or otherwise deprived of human contact to not learn how to speak spontaneously, linguistic experts believe. There are now more than 50 recorded cases of ‘wolf children’ – mostly in India – who have been found living among animals. All were mentally retarded and unable to speak.
A report on a similar case in the United States was published in 1977. It concerned a young girl known as “Genie’, who had been locked up in her room for 14 years – and who had since made some very limited progress in speaking.

6. Divided By a Common Language

Dialects in China vary so widely that they can be mutually unintelligible – as different from each other as French, Italian, and Spanish. But they share the same written language which is understood by literate Chinese in all parts of the world, whatever dialect they speak. As a result, a Cantonese-speaking businessman in Hong Kong could not discuss a project by phone with a Mandarin-speaking businessman from Beijing, but he could do so by letter. And Chinese films shown to Chinese audiences often have Chinese sub-titles to help the audience understand what is being said. Chinese dialects fall into six main groups: Mandarin (in the north), Wu, Min, Kan, Hsiang, and Cantonese (in the south). The Mandarin dialect of the Beijing area is now taught in schools all over China as the standard language.

The Mazateco Indians of Mexico can hold a complete conversation – just by whistling. Mazateco ‘whistled speech’, which is used only by the men in the tribe, is based on the tones and rhythms of the spoken language. By varying the speed, pitch and intensity of the whistles, the men can deal with a wide range of subjects.
A similar language of whistles called “silbo”, is used on the Canary Island of La Gomera. The sounds carry so well across the valleys that a speaker can be understood up to 8 km away.