Background: From the genesis of the internet revolution, there has been a tectonic shift in the marketing industry that even a small vendor wants to market its business digitally or in simple term market the business on Internet or risk being disrupted. The biggest beneficiaries of this rapid growth in the Digital marketing Space are companies earning through Digital Ads like Google, Facebook, Yahoo and other advertising majors.

As per the recent study and per the turnover of giants like Google, Facebook, and another digital marketing company the revenue of the industry as a whole is about Rs. 5,000 Crore and large beneficiary of this revenue are the Company’s providing their services from servers located outside India.

Fact: Being located overseas these companies are exempt from local taxes in India. Many Internet companies are generating substantial revenues from India, hence have a responsibility to the society to pay tax. However, as they are not permanently established in India – they are not liable to pay any income tax in India. To curb this, Government introduces a new tax called “Equalization Levy”.  The Finance Minister Arun Jaitley specified in his 2016 Budget speech that payments crossing Rs 1 lakh a year for online advertising to “foreign e-commerce companies” not permanently established in India would be liable to a levy of 6%. What this means is that if during the financial year the service receiver receives a service of more than Rs. 1 lakh from Service provider who doesn’t have any permanent establishment in India and provide the service from place outside India (Like Google, Facebook etc.,), The Service receiver is liable to deduct an equalization levy of 6% the Invoice value and deposit the amount with the Income tax department. In simple term, it can be understood with the simple TDS transaction where the person who is making the payment is liable to deduct the amount of TDS deposit with Income tax department and remit the remaining amount to the receiver.

Current scenario:  This amendment in the act make the Service receiver  (Indian Company) make responsible for deducting equalization levy before making any payment to the service provider (Google, Facebook). In the first instance, this looks simple and easy to follow. But wait it is not easy. from the day of implementation of law, there has been lots of challenges faced by Indian Service receiver while dealing with Facebook as Facebook is not allowing to deduct amount of equalization levy from the invoice amount and eventually to comply with the law of land, the service receiver is bound to bear the total amount of equalization levy which ultimately resulting in hitting the cost of service more by 6%.

The Indian corporate service receiver had been the worst affected that the Individual Service receiver. For an individual who is taking these services from Facebook, Equalization Levy paid out of their pocket is inflating the cost of service for them by 6% but for an Indian corporate not only his cost of the service increased by the 6% but also they cannot show the 6% payment of equalization levy from their own pocket as their expenses and this will increase their tax expenses further. Interestingly this is not the end of this misery. The amount what has been paid by the Indian service receiver will be a tax credit for Facebook and ultimately Facebook can claim those Equalization Levy paid by Indian service receiver as refund and take the money out of India.

We can see that lots of Service receivers has posted their query on the internet in this regard and there are few people who directly asked the question from Facebook on media portal and hearing Facebook response will be enough to make you furious. 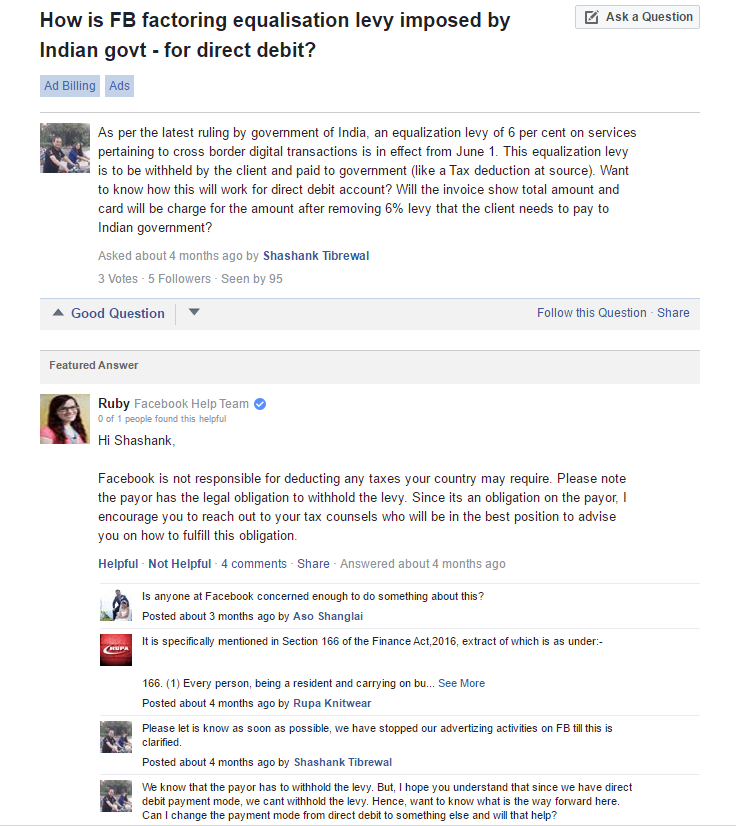 In contrast to this, Google is proving again to be one of the great creatures on earth to work with. Google is proactively reaching out to its client and asking them to withhold the 6% equalization levy before making any payment to them.

Impact: the biggest impact of this attitude of Facebook is on the new startups who have no choice but to pay equalization levy and which will sometimes result in the lower amount of spent on Facebook which resulting in beating them in the global competition and narrowing down their capability to reach to global audience.

Further, this is a tight slap on Tax authority of India by blatant violation of law of the land by not complying with it.

Conclusion: India is emerging as one of the big markets for digital spent and sooner than later Facebook will have to start accepting the law but till that time the small business houses in India will be the victim of this arrogance of Facebook. Hope government of India will hear the voice of the Indian Startups and small businesses and will take a strong action against Facebook.