There are many haunted places in this world but one couldn’t rightly explain the word haunted. The god forsaken land or really being invaded by ghosts or no scope for life. There are multiple explanations for the word haunted but the result is same for all of them, there will be less or no human existence in such places. These haunted places could have been formed by certain accidents or events in history but very rarely only few natural calamities turns a serene place into a haunted place. When one look for such instances in the history, Dhanushkodi, a small island in the tip of south India stands first. Dhanushkodi being declared as ghost town by State Government is one such destination for enthusiastic adventurists and travel explorers but still entrance into this small island in nights is strictly prohibited. This is the story of Dhaushkodi which is not less to a feature film.

Dhaushkodi – A small beautiful island and a prominent place in history

The only border land between Srilanka and India in the Palk Strait. It flourished as a best tourist spot with its white sands and blue waters. It also has a very good prominent role in the history and in Hindu scripture Ramayana. Dhanushkodi means one end of the bow in the local language. It is said that after winning the war against Ravana, Vibhishana the new king of Lanka who is also younger brother of Ravana asked Rama to destroy the floating bridge called as Rama Setu between the mainland and Srilanka. The Rama has broken the bridge with one end of bow from this place. This place use to be a destination for many pilgrimages. Dhanushkodi use to home many people and has a railway station, temples and a famous church. There was a ferry boat also which use to tram between srilanka and Dhaushkodi. 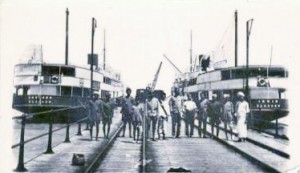 One cyclone has changed the destiny of the busy town island

Until 1964, Dhanushkodi is a good income generator for the state government. There is a railway bridge which connects Rameswaram and Dhaushkodi. There is a train from Madras Egmore to Dhanushkodi. Being faced towards Gulf of Munnar, Dhaushkodi use to experience many cyclones, however they didn’t hurt this place much like the one in 1964. The 1964 cyclone is unique in many ways, it started as a small depression and turned into a cyclone storm at very low attitudes which is very rare for Indian lands. The winds were blowing with a speed of 550 Kmph and on 22nd December it made a landfall on Dhanushkodi that too at night giving a surge to waves raising at 7-8 meters high. During this storm, a daily passenger train from Pamban to Dhanushkodi with 110 passengers has washed away into sea by a tide with the bridge connecting the lands. Many people have died in this storm and entire Dhanushkodi has been put into mashes leaving the traces of railways station and church. 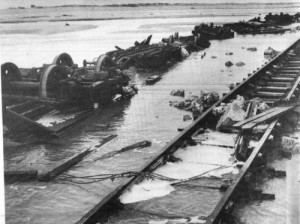 Haunted place or a Ghost Town

People have forbidden the place ever since the cyclone and no one has shown much interest to resume the living there. However, post cyclone, people who occasionally visit there says that they listen some weird noises and they experienced some strange thing happening with them in that place. So government has taken the lead and declared it as a Ghost town prohibiting the people to that place especially in the nights. However the tourists visited the place with lot of enthu to explore what is real and what not.
Dhanushkodi now has very limited access with the mainland and no one has made a permanent settlement in that place. Still, the serene beaches and historical significance of the place makes people to visit it and they say the visit is worth. 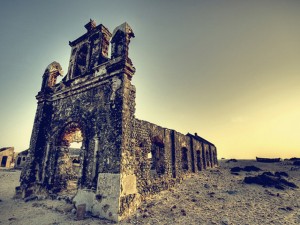 Is this time to gain the lost glory?

Dhanushkodi is on news these days again not for its haunted activities but for the proposal of a bridge from India to Srilanka from this place. If and so the project kick starts there is no doubt Dhanushkodi will get its lost glory with flying colors.
So excited to visit this place, you should actually because it is one of those “must see” places for the enthusiastic travelers in India.

Places in India with snowfall: 10 Destinations