There is one movie where the lead actress in that movie goes for a party, there she will have alcohol and wakes up in her home after one day of the party and she totally have no idea what happened on that day she missed. Later it will be shown that she is drugged high. Movies apart, seems like the sexual assaults on women are taking new turns, the assaulters are taking the rage a new high level with use of some drugs which are easily available. Here is all you have to know about the drug “Rohypnol” which is these days famously called as the “Date-rape” drug.

A drug which is invented for good causes – now takes a turn!!

Rohypnol which is the brand name or usage name of the drug “flunitrazepam” is a powerful tranquilizer which is suggested for the people who are suffering from high insomnia. The drug is an intermediate acting benzodiazepine with general properties similar to those of Valium drug family which are meant for inducing anesthesia. The factors when compared deeply with other tranquilizers the rate of act of this drug is what makes the difference and is 7 to 10 times stronger. It induces sedation, muscle relaxation and reduce anxiety within minutes when consumed. This drug is a boon for people suffering from insomnia and is suggested as a treatment in right methods for decades. Then it is identified that when this drug taken on high dose will impact your central nervous system and you will be in trance or sleep for more than a day. In 1990 FDA has cancelled all the approvals on this drug and halted the production of this in US. However in more than 60 countries like Mexico and Colombia it is still available and is being secretly trafficked to the countries. 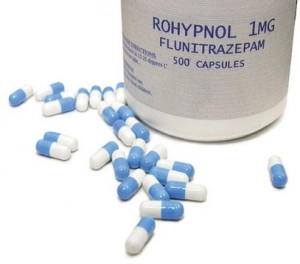 Now it got a new name – The “Date-Rape” drug

The sexual assaulters are taking this drug as advantage and are mixing them in the alcohol consumed by women in pubs, clubs and parties. This drug being very small in almost a size of peanut when consumed with alcohol shows its effects stronger. The consumed person will be in trance and in deep sleep for 24-36 hours with no idea what is happening in her surroundings. The central nervous system will feel the blockage and all sense organs will lose their hold. Assaulters does sexual assault on the victim and they go clean because the victim doesn’t even recollect or remember what happened with her. In many instances the usage of this drug is not identified post scenario because very often the samples are collected after 72 hours of the drug usage. This happens due to the onset of amnesia after ingestion of drug which causes the victim to even understand that she is assaulted. Surprisingly the usage of this drug is also seen on the high school kids and youth for getting high. 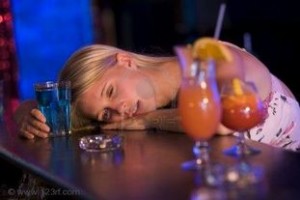 How to take care of this?

US FDA has listed this drugs under Schedule IV category which means that they have low abuse potential but can cause higher physical or psychological dependency. This drug is banned in other developing countries like China, India etc.., but still the toll is going high. The manufacturers have replaced the plain white tablet with blue coated tablet so which when dissolved in the drink will turn the plain drink into blue color helping the victim to identify the use of drug on her, however it can’t be visible in the darker-colored drinks. It is suggested never to leave your drink unattended. It is better if you avoid unknown parties and people. It is better to be with a gang always who could take care even if you are drugged. If and so you are drugged you will still be in senses for half an hour so better take help of cops at that time. 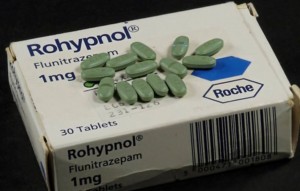 The usage of this drug is substantially being increased these days in the rapes. The excessive usage of this drug on long term may cause problems to the central nervous system and also genital which may lead to serious disorders. So please be aware of this drug. Do you have any suggestions to how to save ourselves in this scenario? Please do comment