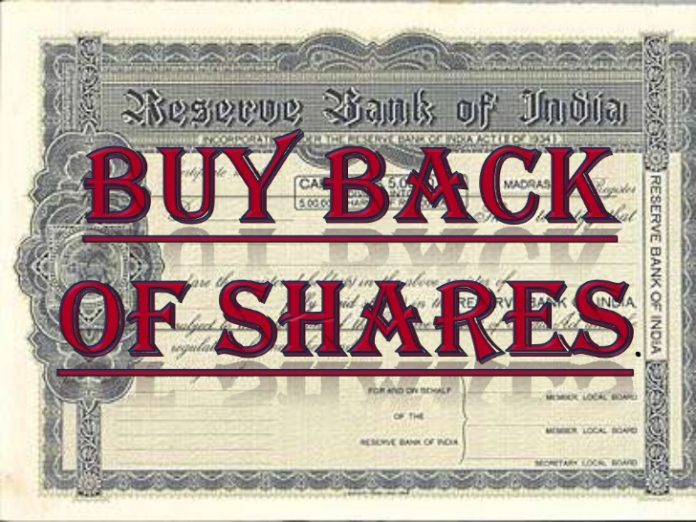 These days we are hearing a lot that many of the IT giants in India are going for buyback of their shares from the market. No sooner the news for buyback comes in the market, most of the Indian investors get excited and consider it as an other corporate action (like Dividend and Bonus) which will increase the value of their stock. But is it true? Does it appreciate the value of stock? Is it a healthy corporate decision? Does it show that company is growing? Let’s try to understand what does Buyback means.

Question is why do they do it? Whenever these news arrives in the market, you will see that the management will have one answer for it which is “This action will unlock value for investor” and “This will appreciate the valuation”. I’ll not talk about the benefit of Buyback here as for that you can google the press release of the management and read all the BENEFITS “as they say” but Lets understand what actually happen when company Buyback its shares.

As I mentioned above, when a company purchase and cancel its shares, the number of shares reduces. With the reduction in the overall shares, the ownership of existing shareholder increases and therefore increased ownership results in increased valuation. Let understand this with an example. Suppose a company has 100 shares in market and you own 10 shares. Your ownership is 10% in the company. Let’s assume company buybacks 50 shares. Now companies issued shares is 50 and your ownership now will be 20%. Looks lucrative right? Nope, Not for me.

As an investor, it is our right to know and understand both side of the stories. Management will be keep talking good about their decision. But let’s also understand the other side of the coin.

Let’s understand the few Phenomena when company can go for Buyback:

To show consistency and upward trend in growth when it is not: Earning per share (EPS) is a significant parameter to judge any company growth. Earnings per share is calculated by dividing Company’s Net Profit by number of shares in the market. Therefore increasing EPS signify the appreciation in the valuation and the company performance. However when company is not doing well and its Net profit start decreasing, that’s where company may start thinking for buyback and will present the increased EPS. Let’s understand how. Let’s take the above mentioned example where company has 100 issued share and you own 10. Let assume company earned Net profit of Rs 1,000 in year 1. Company EPS in the year 1 will be Rs 10 (Rs 1000/100 shares). Let Assume in Year 2 company earned net profit of Rs 600 and company decided to Buyback 50 Shares. Now the EPS will be Rs 12. So in this scenario, Company performance was deteriorated by 40% but the EPS is still increased by Rs 2. Funny? Yes companies have done this in past. Just think if a company doesn’t perform for 3-4 consecutive year, and try to avoid the situation by continuous cycle of share buybacks, This will result in death of a company  So don’t be fooled. This scenario may be good for short term investor who is looking for short term appreciation in value but a long term investors are the worst impacted by this. Most of the IT companies are good and are known for long term investment. So be careful.

To utilize the excess cash in the company: Many a time you will hear from management that we are doing this because we want to utilize the excess cash in a way which can unlock value for investors so we are buying back our shares. Good, Very good. But couple of thoughts. One, The Company has excess cash but it has no idea where to invest it. Company of these magnitude who goes for buyback doesn’t know where to invest their money in. So just think we are living in a world where there are more than 1000 + startups entering into market and these big companies running out of idea. So think twice before investing in a company who says we want to utilize the excess cash. Second, There are other better ways to unlock value for investor like bonuses and dividends then why a buyback. So think and do your research before you invest.

Buyback by an overvalued Company: Valuation of the companies are measured by comparing their PE multiple (Price/Earnings) with others and the industry. PE multiple is calculated by dividing the market price of a company by earnings per share. Generally a company whose PE multiple is more than the PE of industry (which it belongs to) is considered to be overvalued company. If an overvalued company is spending its excess cash in buyback, then one need to really think what company is trying to achieve. The question should directly arises on company’s intention. Let’s take a real example of IT companies. Current PE multiple of Infosys, TCS and Wipro is 16.25, 20.46 and 16.44 respectively. The PE multiple of IT industry is 17.63. TCS is currently valued at more than the industry PE so really the question arises is if the decision to Buyback was good at this PE?

To Help Promoters and top management to buy Shares at cheaper rate: Almost all the corporate have an employee stock option (ESOP) running. In an Employee stock option plan, Companies provide and issue the stocks of company to its top executive, employee and Promoter (Most of the Indian company has promoter as their top executive) at a discounted price and some time at throw away price. Is the company buying its share from the market at market price and issuing it to its executive in form of ESOP at discounted price or throw away price is? Is it not a loss for investor as the amount is used from company’s reserve? Situation will be even worse where an overvalued company is doing this. So just think all these factor and be careful and question management intention.

In a nutshell, Buyback is not bad at all but all we need to understand is

Management intention should be futuristic with an absolute determination that it will really appreciate the value. Past record of the top management does play an important factor as it is important to know about the people behind the decision. Current market scenario is the most important factor as in current volatile market you never know which company will survive after 5 years. These 3 points must be researched before you make a decision to participate in buyback.