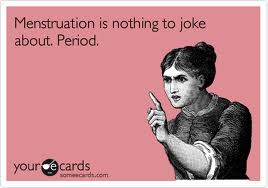 There are so many taboos in Indian society that do not let it prosper. The myths and practices related to menstruation top the list. We claim to be modern and open-minded but when it comes to discussing ‘periods’ in public, we shy away. Menstruation is natural but Indian women are not allowed to discuss it. Why? Why does it have to be embarrassing? Why can’t we accept the fact that it is as natural as life itself? If a girl uses the word “period” instead of the most common code-words then she is judged by everybody! Yes, that’s right. People judge her for being open about her hormonal activities.

What’s worse is the fact that even females give each other death stares if somebody uses the word “period” in front of males.

We, as a society, need to understand that without menstruation, there would be no child-birth.

Here is a list of some taboos/myths/beliefs/practices related to menstruation that we should get rid of immediately:

1. A woman becomes impure during her periods

If that were the case then she would be impure throughout her life because blood would not stop flowing through her veins until her death. The only difference menstruation makes is the flow of blood outside the body.

If you think that a woman becomes impure during menstruation then think again! You, too, may be impure throughout your life.

If that is not superstitious then I don’t know, what is!

If she is not allowed to worship God during her period then why did God make her this way?

Temples are the symbols of people’s faith in God and denying women entry, is disrespecting God himself.

Something to ponder upon, right?

Since the joint family culture is declining, this practice is also on the decline. However, there are still many families that still believe in this myth. Even if women are allowed to enter, they cannot touch anything especially, water and food.

This is the most illogical taboo ever.

What would happen if she touches a utensil? Would it become impure, too? Would you rather not eat than eat in the “impure” utensil?

4. A menstruating woman should use separate utensils

Yes, you heard it right.

A woman on her periods has to use separately kept utensils. But, hey, why limit it to that? She should also wash them herself, separately. Come on! Who would dare to touch her impure utensils, right?

5. A woman on her periods lets out negative/impure vibes

This myth leads us to the above mentioned points. If you ask anybody the reason behind these taboos, they would only have one logic i.e. dark, impure and negative vibes,

There are many places where a menstruating woman is left in isolation and nobody dares to touch her.

I, for one, would prefer it if people stay away from me rather than being a victim of these taboos.

6. Sanitary napkins should be bought secretly

This makes me laugh every time. People wrap a packet of sanitary napkins in so many dark layers as if it’s an illegal and dangerous thing.

If a woman tries to buy sanitary napkins in a super-market then nobody can save her from all the looks she gets. People stare at her as if she is trading a deadly nuclear weapon.

I have never seen any Indian shop that openly sells tampons.

A study has shown that a tampon is more hygienic than sanitary pads yet Indians prefer not to use it.

The logic that people give for this is that most of the Indian girls are virgins and using tampons can break their hymens. (What could be more senseless!)

Our Indian values apparently still dictates that a girl should be a virgin before her marriage hence, no tampons.

8. A woman on her periods should not touch the jar of pickles

Pickle is perhaps the most favorite food item among Indians.

This practice forbids menstruating women to touch the jar of pickle as their touch would ruin it.

All the preservatives would get affected by their touch and it would lead to the rotting of the pickle.

Have you ever heard of something more stupid?

9. A woman on her periods shouldn’t wash her hair before her 3rd day

Don’t we have enough messiness to deal with that unkempt hair should also be on the list?

What difference would the days make?

The condition in villages is even worse. Menstruating women are treated like untouchables, even worse than animals.

If we do not stop giving heed to such practices, we would never be able to truly call ourselves “modern”.