One of the most favorite shows of small screen, COMEDY NIGHTS WITH KAPIL, has set new benchmarks in the history of television by earning the most recorded TRP ever. Showcased on Colors channel at 10 pm on Sunday this channel is loved by every age group. The characters showcased in this show target every possible audience ranging from the so called “aam aadmi” to high profile celebs. With the likes of humorous Kapil Sharma, notorious Sunil Grover and so lovable Ali Asgar, this show gave us some punches we never get bored of. 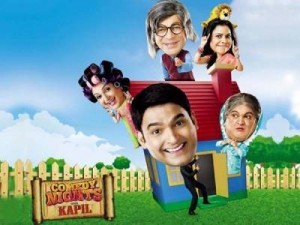 The so called next door neighbor of Kapil Sharma, Palak sets the house on fire whenever she walks in. Every avatar played by Kiku Aka Palak is so lovable and magnetic. The glamour and accent exhibited by Palak makes the audience fall in love with her. Highlights of her appearance on the show is when Kapil teases Palak in the midle of an argument and she replies with a never ending “Ooooo-OoooooooOoo-oooOoo”.

Sunil Grover- Truly an Iconic Personality. It is said that the idea of the show was shared by Sunil Grover and Kapil Sharma over a cup of coffee. Kapil Sharma took the leads of production and the show got named after him. But despite of all this Sunil Grover received applauds for his humorous acting and perfect comic timings. Who in this known world is not aware of “Gutthi”, a character portrayed by Sunil in the show. His style of introduction took leaps and leaps and today Sunil is actually recognized as Gutthi and more importantly, this style of introduction. 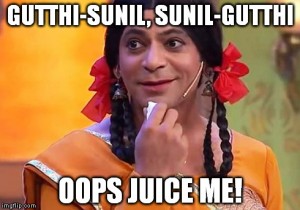 Does Ali Asgar now even remember he originally is a masculine member of the society? I doubt over it. We are so habitual seeing Ali Asgar dressed in the outfit of “Piyakkad-Daadi” that to see him in manly outfits in an indigestible thing. Dadi’s signature dance step and “Ittu Sa tha Tu” made her a legend in the hearts of show lovers. The ever active Daadi creates such an atmosphere on stage that the live audience can not resist itself without praising and hooting Daadi-Daadi on her mere presence. 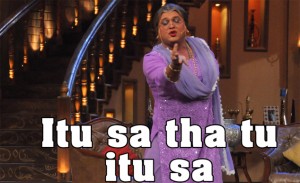 This dialogue splits my insides in half whenever the “22 year old, Hot, Sexy , Glamorous”  Buaji utters these words. Upasana Singh, another well known face in every indian household, is portrayed as Kapil’s unmarried buaji looking for the “Phupha-Ji”.Pinky Bua never misses to flirt with celebs visiting the sets and when she feels she ain’t getting the response she needs, she never forgets to exclaim, “Bittooo-Kaun Hai Ye AAAdMiiiiiii?”

READ MORE  Things That Happen To You On Every Diwali! 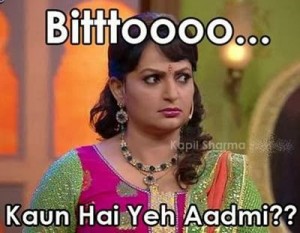 Ali Asgar once again presents a laughter riot when he begs celebs for “Shagun ki Pappi”. Ali asgar can be rewarded for the prestigious “MOST KISSES TO A MAN” Tag. From big legendary actors to new starters, Ali aka Daadi has not left anyone. Forcingly or willingly, Daadi has earned what she asked for i.e. “SHAGUN KI PAPPI”. 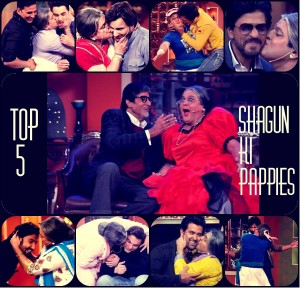 Every indian household has a Wife that waits for weekends for their husbands to take them out. But husbands prefer watching comedy nights with kapil because they see themselves in Kapil. Kapil bullies her wife everytime she comes for a random visit to check him and Kapil forces her to go back by making serious fun of her family and her “Bade-Bade-Honth”. This Love-Hate relationship of husband-wife is enjoyed by everyone. 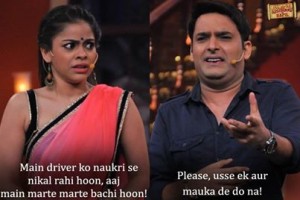 Kapil’s servant, Raju whenever wants onto stage makes everyone bursts into laughter. The so-frustated Raju enters the stage into disgust for not being paid and he being so bored of towing milk out of a wooden goat. He enters just after celebs takes their seat and on seeing them he just exclaims “ oye-hoye-hoye-hoye-hoye” and let the guest be of any genre, be it cricket, hockey, bollywood,music, he just wants to join their league so that he can escape from his Master Kapil. 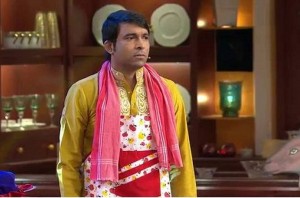 If you are looking for anything logical in Comedy Nights With Kapil, Sorry but you are just wasting your time. This punch justifies the above statement perfectly. In addition to OoooOooOoooOoo, Palak  has one more weapon on being severly bullied by Kapil which is “Talk To My Hand”. On a perfect time, palak punches this and kapil is left speechless. 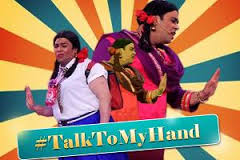 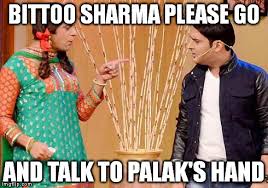 When every character has a punch line to draw the attention to himself, then how can the protagonist of the show refrain himself of having one. “Babaji Ka Thullu” is one such punch that kapil uses frequently in the show and whenever he does, laughter automatically comes from inside. Along with this punch Kapil has also introduced a signature step for “Babaji Ka Thullu” shown below. The magnetic-ness of this punch can be felt that this punch when introduced came in the twitter trending list right away. 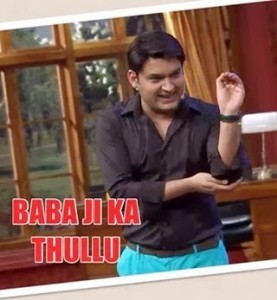 DISCLAIMER: IF YOU ARE STILL NOT WATCHING COMEDY NIGHTS WITH KAPIL, PLEASE DO.