“Ragging”, or the more politically correct term “Positive Interaction” is a general social phenomenon which can be observed in varying degrees across all academic institutions in India. This so called “Positive Interaction” can be as intense as a “Jugnu Dance”(You really don’t want to know about this one) , or it can be as light as an ex tempore play, wherein you’ve to convince an elderly gentleman  who is way past his prime, to partake in your heavenly services as an escort (Speaking from experience). It tests your creativity, your patience and your tolerance. It can create both good bonds and memories, but it can also scar you. Personally, it helped me make friends, but it also made me realise who is worth talking to and who isn’t. These “personality development exercises” (They’ve coined too many terms for this) are an unforgettable part of your formative years at a University. But not everyone reacts to ragging in the same way, everyone has a different approach to it, and this post lists the 8 most common approaches that one can take to ragging. 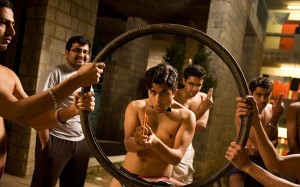 We all know this guy. He purposefully goes to rooms to make people rag him. He does outrageous things without being asked. Ragging, for him, is a leisurely activity which is meant to be enjoyed. He exhausts his seniors by his sincere lack of inhibitions. He makes them afraid. This guy makes seniors say “Bhai bas hogaya ab tu ja”.  I salute his determination.

A typical ragging session with a person of this category goes like “What are your hobbies?” “Sir, I like reading  and writing poetry”, “Dance karna aata hai?”, “Nahi sir”, “Gaana gaega”, “I cant Sing sir”, “Kuch kar sakta hai?”, “Sir…Hamlet ke dialogues yaad hai..bolu kya?”… “Bhai chale ja tu”.  These people are geniuses. They have cracked the code. They know that the end objective of ragging is mere entertainment. And, the easiest escape route is, be as boring as a Tushar Kapoor movie. You can either be so boring that you put your audience to sleep, or you can be so lame that the people gathered around you cannot stand you any longer. The author of this article is a proud part of this category. Here is an excerpt from my own life: “Kya karna aata hai?” “Sir, mai joke suna sakta hu”, “Suna”… “Why did the police arrest a tap after someone put cream on it?…because the tap became a “Creamy-Nul”. (Nul means tap in hindi) K

If seniors try to rag these creatures, they quickly roll one J up. You cannot be stoned and aggressive at the same time. These breeds of fresher’s have come to college with a worthy skill set. And it is this skill set that would save them. They’ll end up making the most number of acquaintances, but they’ll also end up doing all the clerical work involved in “going green”.

These are the people who cannot take crap for anybody. They end up arguing a lot. They file complaints and in some colleges *cough* A top 3 NLU *cough* they write letters to the HRD Ministry. They use the overly extremist penal provisions against ragging to threaten seniors who approach them. They ward off all company. And invariably, they end up getting no notes.

These people are so afraid of ragging that they end up taking refuge outside the hostel in other lodgings for the weekends. Or they go back home. Or by some means or the other they make themselves invisible on the days where the frequency of “Positive Interactions” is the most. In most extreme cases, these weekend lodgers end up living outside the hostel for the better part of their first years due to irrational fears. They truly come back to college in their second year, when the fear of “Interactions” no longer exists. And then, they do the most hypocritical thing ever, they rag their juniors. If you’re a weekend lodger, then you’re a sad person to be around, friend.

These people fall short of being in the “Bore” approach just because of the fact that they don’t do it on purpose. They are genuinely socially awkward people who have been pulled away from their comfort zones. If you ask them to dance, they will surely do it, but…trust me you don’t want to see them dance after all. They will give you awkward stares and draw blanks at questions like “What’s up?” Invariably, their silence would make them easier targets, and their awkwardness would make them more vulnerable.

The people who follow this approach tend to disclose everything they’ve ever said or done in their life, no matter how personal or outrageous that bit of information may seem to be. An excerpt from such a conversation would be “What is the craziest thing you’ve ever done?”, “Sir, I had sex with a girl while my friend was passed out on the same bed beside me” Another equally inappropriate answer to the same question is “I used to be an LTTE agent”. At the end of this conversation, the senior is left flabbergasted, and you become the topic of discussion for days to come.

This is the least tried and the most effective approach to ragging. Pretend that you’re a homosexual and give the senior genuine compliments on his dressing sense. The ragging session would surely not last long. But, you’re chances of scoring a girl in college might hit an all time low. But, hey, at least you escaped all the fun “interactions”, didn’t you?