“Mother’s Mercy,” the finale of Game of Thrones’ fifth season set the readers of George R. R. Martin’s books into a frenzy.

Several major scenes from A Dance With Dragons, the last published volume, were adapted pretty faithfully — such as an intensely disturbing scene involving Cersei Lannister’s Walk of Shame and Dany’s unexpected meet with an army of Dothraki.

Here’s an explanation of the biggest differences between the books and the show in season 5.

This sequence is entirely invented for the show. Brienne spends the whole of Martin’s last book searching for Sansa but never finds her. She actually never even comes close, as she’s looking in the wrong kingdom entirely. 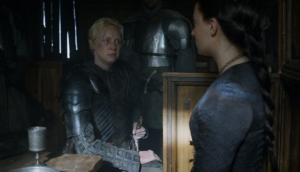 2) The awful Bolton scene isn’t in the books — not with Sansa, at least

The horrid scene  in which Ramsay Bolton rapes his new wife, Sansa Stark, while Theon Greyjoy is made to watch  is an invention of the show, but only to an extent.

Martin’s written version of Ramsay’s wedding night  is indeed truly horrific. Even worse things are implied to happen to the bride later on. The big difference, of course, is that the bride is a friend of Sansa’s named Jeyne Poole. The show has chosen, instead, to put Sansa herself through these events rather than introducing a new character. 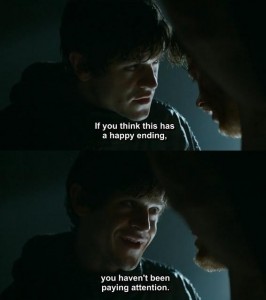 3)The huge fight sequence with the White Walkers is invented

In the battle, the unstoppable undead horde massacres human after human, and despite Jon killing his White Walker opponent, the human survivors end up merely fleeing rather than winning.All of this is implied in the book but is never described in detail

But the end conclusion is the same as the books: the wildlings come back to the Wall….. 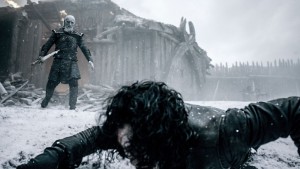 4) “I’m going to Dorne. And I’m bringing our daughter home.”

Cersei does decide that she wants to retrieve her daughter, but she sends another member of the Kingsguard . Neither is it a secret mission. Jaime does leave the capital, but he instead heads off to tie up some loose ends from the war in the Riverlands. Bronn, meanwhile, hasn’t played much of a part since he bid adieu to the imprisoned Tyrion in book three.There’s no big fight between Jaime and the Sand Snakes in the books. 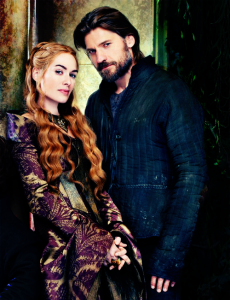 5)Myrcella doesn’t die in the books

Jaime Lannister never goes to Dorne in the books as mentioned earlier. Although  factions in Dorne are similarly angered at the Lannisters for Oberyn’s death and are ready for revenge. In one of the many plots brewing  Myrcella is badly wounded in one of the escapes — when someone tries to kill her, one of her ears is chopped off. Gruesome but definitely no death.

But she’s still alive in the books and at the close of A Dance With Dragons she is on her way back to King’s Landing. 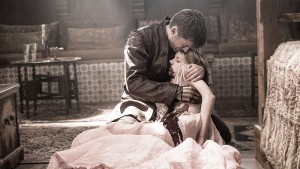 6)The show is revealing much more about the White Walkers

George R. R. Martin introduced the Others in the very first chapter of the first book of A Song of Ice and Fire — and has barely shown them again since.The fast-moving skeletons  don’t appear in the books at all. The corpses that the Others reanimate have flesh on them and are slow-moving. The white walkers are a race of human-shaped beings who are extremely difficult to kill, possess superhuman powers, and appear to be extremely hostile toward humans. Apparently there’s a lot more of them to come. 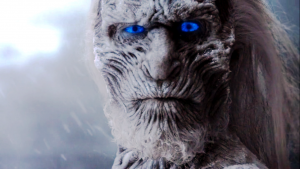 Tyrion hasn’t met Dany as yet in the books.
He is captured by Mormont and then sails with him to Mereen but is captured by slavers en route. The pair is then sold the a Yunkish Master, who is camped along with the Yunkish Army outside Mereen. Tyrion is forced to perform a mock joust along with another dwarf whom he meets on his way to mereen at the opening of the fighting pits. 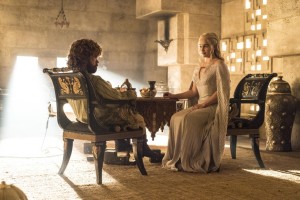 But it’s really the North we should care about. White Walkers and giants, wildings and crows. And Jon Snow.

Jon Snow is dead. Tricked by Olly to go outside where Alliser and others waited under the pretenses of having information about Benjen. Jon is the central figure in these stories. His own story is far from finished.

We’ll have to wait and see.