Undoubtedly the most worried and threatened problem in the world is Terrorism. The hunger, riots and chaos all these problems does have a solution when worked on it collectively. But the terrorism is one such problem which doesn’t have a proper solution and it being grown day by day. Terrorism is a big factor that hits the country’s economy and most importantly the life of citizens. The reasons for terrorism might be many, but it would be directly hitting the people who are innocents. The political pleas and tactics are some of those reasons for the terrorism. Discussions apart here is the list of countries which has more number of terrorists. 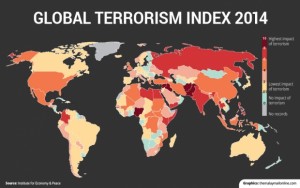 Somalia is one of the most underdeveloped countries of the world. Even these days you would find people fighting for food and water there.The infrastructure and development is almost obsolete. An international terrorist organisation Al- Shabaab has taken over Somalia into its control and has started to terror the people. They proclaim that this fight it for people but due to the attacks by this group many Somalian citizens has  lost their lives

India is very fast developing country in the world. It is being observed by many countries and is considered as a good place to invest. On the other side it is also such country which is prone to terrorism. It is surveyed that a minimum of 3,000 people in the country die every year with the acts of terrorists. It is also claimed to be country with highest number of Sleeper cells of terrorists. The terrorists are succeeding in attracting the youth of the country towards terrorism which is a very serious act.

Pakistan is also a country which wants to develop but by the terrorism attacks and inability of country officials to eradicate terrorism has made the country a prey to terrorism. The Al Khaida militant organisation is the top militant group. They fight for pride and power they term this war as Jihad. It is estimated that more than 10,000 innocents are being killed in deadly terrorist attacks

Nigeria is a well known country in the African continent.  This country is also underdeveloped. The mail problem is the militants and terrorists are mostly youth who doesn’t have jobs. They do riots and attacks for survival. The major terror act in Nigeria is abduction of girls. It is surveyed that many girls and women are loosing their lives because of the terrorists as they target them.

Afghanistan use to be a well to do country with its well available natural resources. The country has slipped into Taliban from the early 90’s and now it is totally in their control. Many innocent people has died in the attacks done by talibans.

The ISIS has taken the entire control of Syria. The ISIS is actually a rebel organisation which has born against the Syria President and within 2 years it has reached to a stage of threatening the big countries. Well, ISIS is also considered as the most richest militant organisation. ISIS has destroyed many monuments of syria and nevertheless to say many people have lost their lives

Iraq is also under the control of ISIS. Iraq has become their head quarters. The rich availability of crude oil has made them to invade the country. More than 2 million Iraq citizens have lost their lives in past 2 years due to attacks.