Our English teachers were probably our favorite teachers simply because English was the easiest subject that we had to study and English teachers were usually very calm, nice and strict at the same time. However, most of us still struggle with basic grammar. Most of the people make small grammatical mistakes that sometimes change the whole meaning of the sentence.

Those mistakes are very petty but very important. Since most of the places require good command over English, one should avoid making grammatical mistakes especially the most common ones as those are also the most disastrous. 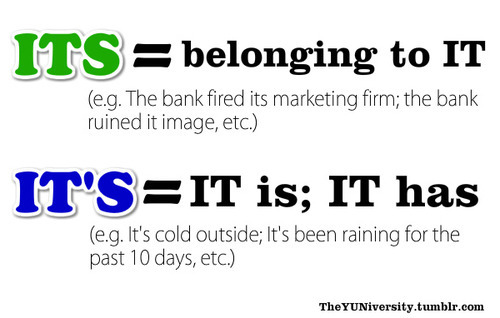 The most common error people make is the usage of “its” instead of “it’s” and vice versa. “Its” is a possessive pronoun. “It’s” is a contraction of “it is” or “it has”.

For example: a. It’s been a long day.

b. Every dog has its day.

In this sentence, “its” is used to indicate possessive form of the noun, dog.

This is the most annoying grammatical mistake ever. “You’re” is a contraction of “you are”.  The word “your” indicates ownership or that something belongs to you.

For example: a. You’re wrong.

This sentence implies that ‘you are” wrong (literally, if you use “your” instead of “you’re”).

b. This is your mistake.

3. There, their and they’re

The level of confusion among these words is so high that even the people who use proper words at proper time are often trapped in this confusion.

For example: a. There you are!

This sentence describes the location. It is indicative of where a person is.

b. Their house was robbed last week.

In this sentence “their” is used to indicate that a particular family’s house was robbed.

READ MORE  10 Facts About the Need for Digital Marketing

This sentence states that they are going. This is a universal mistake. Every where people use these words interchangeably and end up changing the whole meaning of the sentence.

“Then” is used to indicate that something is happening at a point of time. It is an adverb. it is also used with sentences beginning with “if”.

“Than” is used for comparison. It is a conjunction.

For example: a. If you use proper words then nobody would judge you.

In this sentence, “then” is used to describe an action that would happen if something is done.

b. Her grammar is better than his.

In this sentence, “than” is used to compare his and her grammar.

For example: a. You and I need to know the rules of English.

b. Between you and me, that’s saying something.

This mistake should be avoided at any cost.

ALWAYS use the present form of verb with “didn’t”.

“You didn’t knew” is a wrong sentence.

Never make this mistake or else you will be judged. (Harsh but true) 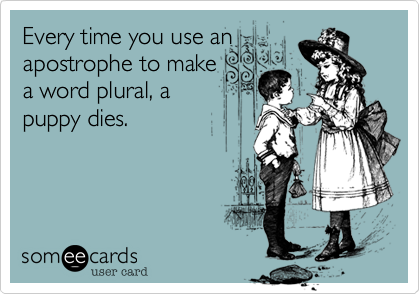 Many people have the habit of putting apostrophe before “s”.

Plurals NEVER have apostrophe unless we are talking about their possessions.

Apostrophe is used to indicate ownership or possession.

For example: Xs, Ys, ABCs are correct form of plurals of X, Y and ABC, respectively.

Using X’s, Y’s and ABC’s indicate that something belongs to X, Y and ABC respectively.