‘Sarabhai vs. Sarabhai’ is a jewel in Indian Television. It was launched in 2005 and here we are, 10 years later, still watching it over and over again. This show transformed the face of Indian TV. It was sarcasm served with crisp humor at its best!

This show was the refuge for those who were sick of the over-dramatic saas-bahu serials. This show saved us all from the tortures of  the likes of “Kyunki saas bhi kabhi bahu thi”. It was way ahead of its time. One could never get bored while watching it. It commented on the idiosyncrasies of the world very subtly. It was a show like none other, let’s take a look at the reasons why:

1.The adorably real and off-beat characters

This show presented us with some very disparate and distinctive characters. Besides the characters, this show had the best suited actors for every character. The main characters were played by Ratna Pathak Shah (Maya Sarabhai), Satish Shah (Indravadhan Sarabhai), Sumeet Raghvan (Sahil Sarabhai), Rupali Ganguly (Monisha Sarabhai) and Rajesh Kumar (Rosesh Sarabhai).

From ever so charming Indravadhan to quirky middle-class Monisha. It had it all in terms of making audience laugh.  My personal favorite is Rosesh Sarabhai.

No one could have pulled off this character better than Rajesh Kumar. His appearance  itself as Rosesh could tickle your funny bones. Rosesh was apparently a budding poet who used to write about very unconventional topics. His nasal voice and feminine demeanour made him unbearable to almost everyone except his mother, Maya Sarabhai whom he dearly called “moma”.

Here is a piece of his brilliant poetry writing:

The award for the best and most sophisticated “saas” of all time goes to Maya Sarabhai. She is the Indian queen of sarcasm and wit. Ratna Pathak Shah carried off this character so brilliantly that it was really difficult to imagine her any different in real life.

Her ingenious ways of ridiculing Monisha’s middle class stints were beyond brilliant. Her quick-witted tussles with her husband, Indravadhan were so fresh and piquant that they left us all amused.

No one could be any classier yet “desi” better than Maya Sarabhai. 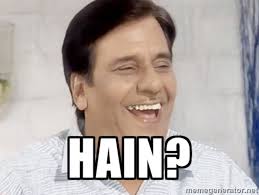 These two were the latent reasons behind the success of the show. Dushyant’s knack for everything non-manual and his way of explaining technical things left us all confused yet chuckling. He was Maya and Indravadhan’s son-in-law. The best part about him was the manner in which he could fit into every situation and not once looked out-of-place.

Similarly, Madhusudhan Fufa managed to stay deaf every time when something important was being said to him and being the lovely audience that we are, managed to laugh even at his mere “Hain?”

Being a true middle-class girl that she was, she knew how to save every penny. She had all the ‘jugaads’ and bargaining tricks.

Her breathing was enough to annoy her mother-in-law. She may not be the funniest but this show wouldn’t have been funny hadn’t it been for her.

He was the most adorable character of this show. This was the first time that a father-in-law was shown supporting his daughter-in-law to annoy his wife. He was a guardian angel for Monisha. He was a reality check for everyone on the show. He ridiculed his wife for her hypocrite élite society and mocked his son for his lack of writing skills.

Yet he made us all realize what a happy family is made up of!

All in all, this show had everything from drama to tragedy to fun. Everything about it was spot on! This, in my opinion, is the best thing that has happened on Indian TV.