Cricket is one of the most popular sports in the world especially in India.It is also known as the “Gentleman’s Game”.This is because of the sportsmanship and respect for other players which one can see while watching and playing the game.But,there have been a few incidents due to which the environment of the game was spoiled.One of the major reason for the spoiled environment is sledging.Sledging is a process in which player of one team verbally insults the player of his opponent  team in order to maintain some mental pressure on them.There are a lot of incidents of sledging.But,mostly sledging can be seen in the matches of the Australian Cricket team and the matches played between India and Pakistan.Sometimes,sledging an opponent is beneficial but sometimes it results positively for the opponent.The Indian players have been involved in a lot of sledging incidents especially with the Pakistani players.Here are 5 such unforgettable sledging incidents that involved the Indian cricketers:-

1.The Sehwag and Clarke clash

It was in 2004,when India was playing a test match against Australia.When Sachin Tendulkar came to bat,23 years old Michael Clarke started saying him that he is too old to play.Virender Sehwag,who was standing at non-striker’s end came to Michael Clarke and asked him his age.He told that he was 23 years old.Sehwag told him that he should respect Sachin as the number of centuries he is having are even more than Clarke’s age.But,Clarke still kept on abusing Sachin again and again.Sehwag once again walked up and asked him that his friends call him a pup.He agreed to this statement.Then Sehwag asked him which breed.After that,Clarke behaved properly in the rest of the match.

READ MORE  7 things to empower youth in our country 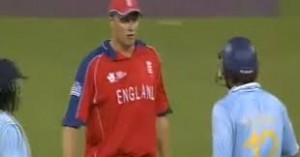 This incident took place in 2007 in the inaugural edition of the t20 World Cup.India was batting first.This was a must win game for India.When Yuvraj Singh was batting,Andrew Flintoff came to him and started sledging him.Yuvraj also sledges him back.The fight was sorted out by Mahendra Singh Dhoni and the umpires.But,what happened just after this incident was unforgettable.Yuvraj hit six sixes of the very next over of Stuart Broad. 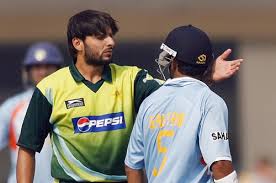 This incident took place in the bilateral series between India and Pakistan held in India in 2007,a few  months after the inaugural World T20 in Johannesburg. India had gone off to a great start as Saurav Ganguly and Sachin tendulkar made an opening partnership of 68 runs.After that, Gautam Gambhir and Yuvraj Singh were brought to the wicket.The incident occurred when Shahid Afridi was bowling to Gambhir. A verbal spat followed after Gambhir hit Afridi for a four, and on the next ball the players collided while Gambhir ran for a single. A heated argument followed and was brought to a halt only after on-field umpire’s intervention. 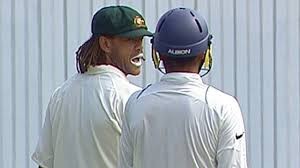 In 2008,in a test series between India and Australia this infamous incident took place.It was the Sydney test.Harbhajan was batting along with Sachin Tendulkar.Bhajji hit a four on Brett Lee’s ball.After that he went to Lee and told him “Hard Luck”.Symonds took it in another way and came to Bhajji and told him that they don’t need that he should do that to his teammates.Then there were a few more exchanges between Bhajji and Symonds.Suddenly,Symonds told that Bhajji again said him a “monkey”.This was the second time after Australia’s tour to India that Harbhajan called him a “monkey”.This was the most controversial match and in the end,Harbhajan Singh was banned for three test matches. 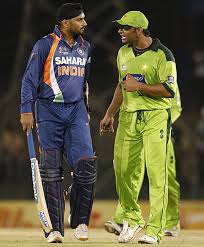 In 2010, India and Pakistan met in Dambulla, Sri Lanka in what was a do-or-die match for both the teams in order to reach the finals of the Asia cup.Pakistan batting first had put up 267 runs on the board and were all out in 49.3 overs.  Wickets kept falling for India at regular intervals and India found themselves in trouble needing 38 to win 29 balls with 4 wickets in hand. This is when Harbhajan Singh walked in.Harbhajan, the kind of batsmen he is, started going for wild swings and hit Shoaib Akhtar delivery for six. In the second last over, Harbhajan played two dots of Akhtar and got an earful from Akhtar. In the final over, with India needing 7 to win, Suresh Raina was run out in a desperate attempt to take strike as Harbhajan was missing deliveries. But, Bhajji redeemed himself after hitting a six of Mohammed Aamir when 3 runs were required off 2 balls and roared towards Akhtar after hitting the winning shot.