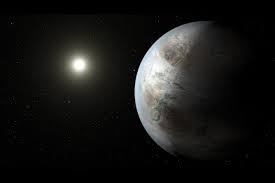 23rd July, 2015 is a date many would remember for a long time. NASA has announced that there is a planet called Kepler 452B (named after the telescope that spotted it) which has conditions identical to our planet Earth. Hence, it is commonly being called “Earth 2.0”.

Many movies have touched the topic of another planet with the possibility of life, the most recent being P.K.

One of my friends likes to call this new planet, “P.K. ka Gola”.

It is Earth’s older cousin and the first one in the habitable zone. Kepler researcher Jon Jenkins has said that the Earth is less lonely, today. Although there are many uncertainties about its atmosphere and surface, there are strong chances of the survival of life on this family member.

Let’s take a look at the things that we need to know about this new addition to “La Familia” :

Kepler 452B is about 1,400 light-years (distance that a beam of light can travel in one year) away from Earth. It would take us millions of years to reach there. Light from the sun takes 8 minutes to reach us. Do the math! Generations would die before human-kind would be able take its first step there. As a matter of fact, the fastest spacecraft that we have would take around 25 million years to get there which is 10 times more than the time, human beings have inhabited the earth.

Unless we find a quicker way to get there, our species would become extinct.

For now, it is nearly impossible to even visit that planet.

2. The size and gravity

It is about 1.5 times or about 60% bigger than Earth. Its gravity is twice that of the Earth. However, scientists are claiming that it would not be an obstacle in the survival of life as humans would eventually adapt to the gravitational pull.

Jenkins said, “People already adapt to heavy weights – humans are built to do this kind of thing. The human body has an amazing ability to repair itself – so over time, humans could adapt.”

It is approximately the same distance away from its sun as earth is from ours. It is 6 billion years old. It receives 10% more energy  from its star than we do. It is a warmer planet than the Earth. Plants can supposedly thrive really well there.

Imagine how much stronger would Superman be had he been sent to this planet instead of ours!

In Jon Jenkins’ words: “The sunshine from Kepler’s star is very similar to sunshine from our own star, and plants could be able to photosynthesis just the same.”

4. Duration of the years

Since Kepler 452B is approximately at the right distance from its star, the duration of  a year on that planet is also almost the same as that on our planet. In fact, it is only 20 days longer. It takes 385 days to orbit its star.

This data is better than what we had come across so far.

So, it is something substantial, after all.

Although scientists haven’t found enough crude evidence to correctly judge the surface and atmosphere of that planet, it is quite possible that it has almost the same atmosphere as that of the Earth.

Some evidences show the presence of active volcanoes. It is being said that the surface is rocky.

It has the right temperature that supports the existence of water in liquid form. So, there are high chances that water is present on that planet. And we all know the importance of H2O in our lives.

Jenkins said, “The planet almost certainly has an atmosphere.”

Some scientists are claiming that this planet might be experiencing what our planet would experience 1 billion years from now as the sun goes brighter and warmer every year. They are also claiming that water might have been turned to water vapors by now.

However, if majority of the scientists are to be believed then there is a strong possibility that life already exists on Kepler 452B.

HOW COOL IS THAT!

If more concrete data about this planet is found in future then we would be accurately able to decipher its composition but till then, we can only anticipate.

What if the people on that planet are also looking for another planet and come across Earth? What if they are much more advanced than us and send a probe team here?

It would be E.T. all over again, only real this time.

I can’t wait for more information on this new addition to the family. Can you?