“That would have been a goal had it gone inside the post.”

“Argentina are ranked the second best team in the world and there is no higher prize than that.”

“Up in the aaaaaaair,” followed by “taken” or “dropped.”

There was a time when the likes of Tony Grieg, Richie Benaud, David Coleman or Brian Moore would capture our attention more than the game and their style, choice of words and elan felt like we were watching some astonishing straight drive or a gravity defying bicycle kick. They gave words to emotions and actions on the playground and made us savour their commentary long after the game was over. These sports commentators are as famous as the game’s stars are and are truly torchbearers of the sports they were associated with. 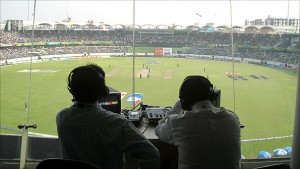 But gone are those days when we were all ears for what the commentator had to say about the situation, a particular shot or a whirlwind kick from the left wing. The glory of a high on class and funny in a suave way of commentary is marred by some fashionable tropes (let us not elevate them to the glory of a cliché) and hyperbolic phrases. Sure, a commentator has got no easy job to do. It is akin to walking on the edge of a knife. They cannot reread, rectify mistakes and improve the way a writer can do. Writers are restricted by space but commentator has got acres to fill with no time to breath, making mistakes inevitable and sadly, audible. They also aren’t armed with anything called scripts and only have a few notes, onscreen graphics and statistics to draw from. They react to situation like we do and hence errors cannot be dodged. Commentators, abiding by the contract are obliged to sell and therefore, a Diwali cracker will be blown out of proportions and will be projected as a nuclear warhead about to explode. We loved the subtle art of Benaud and Grieg- Bradman of the booth, Murali of the mike, for they knew where to pause without making it look as if they were wondering what to say next. What separated Eric Clapton from others is that space between his notes. Commentary today has draws flak from many. Here are five reasons why we have grown to hate them.

Commentary today can be summed up in these three words. Add to that blindingly obvious statements made by the microphonists every now and then. All they appear to be is that they are commenting over radio and the kind of bloke who loves to tell stories. Sometimes, a plain and dry line just ruins a very beautiful save from the goalkeeper. Every boundary is the result of some fantastic short. The nuances and the reading of game is long gone like the dragons. 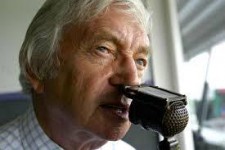 This has led to a scary dilution in the art of commenting as the microphnists are bound to sell soft drinks, electricity wires, real estate, mobile phones and god knows what else. Watching Cricket back in those early days was a different experience altogether as you had no commercial playing between the overs disrupting the flow. Now we have a product’s name hitting our ear drums apart from talks about the ongoing way. The commentators should sell subtly and know where to stop. The Karbonn Kamaal Catches are not more important. It snatches the opportunity of describing something phenomenal and it gets limited to a ‘maximum.’

3. Lack of Camaraderie Between the Pair

One remembers the 2007 Trent bridge  Test, on which Michael Atherton and Nasser Hussain had a lovely jaunt about over rates to establish that each was a better captain than the other. Nasser insisted that it was due to India that they were asking for sawdust over the pitch and Mike was of the opinion that Test cricket was exciting than ever so why worry over these petty things. This lacks hugely in the commentators today and this lack of balance at the booth is highly drab and it gets boring to listen to the quacking after a while. 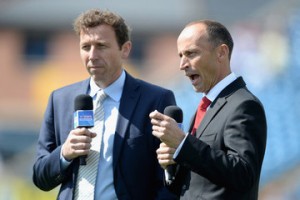 When we speak of balance, we imply that commentators totally forget that they are there to inform and entertain us. This balance is crucial as many tend to ignore it and it becomes tough to resist them after they go overboard and make the unwanted tilt. Someone who caught this balance and held on to it was David ‘Bumble’ Lloyd. His compassion for the players and love for the game shone through and he never forgot to entertain us in his own style while informing us at the same time. Some, like Sidhu, in a bid to entertain us go too far and that results in them drawing a flak and u watching the game muted.

5. Lack of Seriousness By The Broadcasters

A senior ESPN journo said that all you need to assert your right on the mike is a famous name, a degree in hyperbole, an MA in cliché and PhD in the Blindingly Obvious. Good call, we’d agree. Serving all these criteria can guarantee you a mike to spit at but cannot, however, make sure you are the right person for the job. Sometimes, another characteristic of a man (read Sidhu) can get better of him, overshadowing is love for the game.