ICC Cricket World Cup is the most prestigious tournament of cricket.This tournament was first started in 1975.The games are played in the One Day International format.The team winning this tournament is considered as the strongest team in the world.In this tournament,the 10 test playing nations take part along with 4 associate nations.This is the toughest tournament of cricket.Every team tries to give its best in every match and hence,the level of competition is very high in this tournament.Due to this there have been a lot of matches in the world cup that have given thrills not only to the players but,also to the audience.Here are 5 such thrilling encounters in the history of ICC Cricket World Cup:- 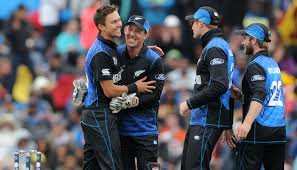 In ICC World Cup 2015,there was an epic clash between Australia and New Zealand.Australia won the toss and chose to bat first.The New Zealand bowler Trent Boult looked in brilliant form as he took brilliant 5 wickets and gave only 27 runs in 10 overs. Haddin somehow managed to score 43 runs and the Australian total was 151 runs only.Due to a low total the match appeared to be one-sided.The skipper of the Blackcaps i.e. Brandon McCullum scored a terrific 50 off just 24 balls and the match appeared to be in New Zealand’s pocket.But Mitchell Starc had some other plans for the Kiwis.Starc took 6 wickets that day.New Zealand was losing some rapid wickets except Kane Williamson who was playing some sensible cricket.In the end, they needed 6 runs but had only 1 wicket in their hands.But,on the very first ball of the 28th over Williamson hit a brilliant six and New Zealand won that match by one wicket.Although Australia lost that match but,they fought till the end. 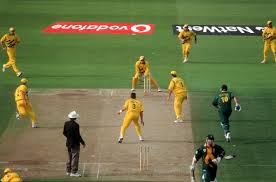 The 1999 world cup semi-final can never be forgotten by the cricket fans. South Africa won the toss and elected to field. In seeming conditions, Australia managed to put up a total of 213 with Michael Bevan and Steve Waugh scoring vital half-centuries. Shaun Pollock and Allan Donald tore through the middle and lower order picking up 9 of the ten wickets between them. South Africa began their chase steadily with Kirsten and Gibbs putting on a good opening partnership. Wickets then fell at regular intervals as South Africa collapsed to 61-4. Jonty Rhodes and Jacques Kallis then put together a vital partnership taking South Africa within 40 runs of victory. Through some valuable runs from Mark Boucher and Pollock, and some big hitting from Lance Klusener, South Africa moved closer to the target.In the last over,South Africa had only 1 wicket in their hand and Lance Klusener was on strike.By the end of second ball of the last over their scores were level.On the fourth delivery,Klusener went for a single although the chances for a run out were high.He sprinted to the other end but,Donald didn’t listen to the call for then run and was standing in the crease and was watching the ball and this resulted in a disastrous run out.The match resulted in a tie but as Australia ended at a higher position in the super six table.they were declared as the winners. 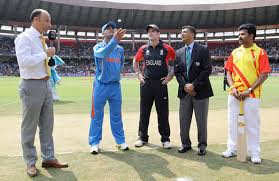 The 2011 world cup group stage match between India and England was an absolute thriller.India won the toss and elected to bat first.Sachin Tendulkar scored a brilliant century.Gambhir and Yuvraj,on the other hand,scored amazing fifty.Eventhough Tim Bresnan took 5 wickets,India was able to score 338 runs against England.England’s skipper Andrew Strauss was looking in fine touch that day.He scored a brilliant 158 off 145 balls.Ian Bell also scored a brilliant half century.Due to such brilliant batting by the English batsmen and such a pathetic bowling by the Indian bowlers, it looked as if India won’t be able to win Against England.But,Zaheer took the wickets of Bell,Strauss and Collingwood and brought India back into the game.On the third delivery of the last over,Shahzad hit the ball for a six due to which this match resulted in a tie. 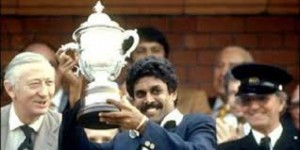 The 1983 world cup final was third consecutive appearance of the West Indies in the world cup final.They won the toss and chose to field first.Indian batsmen were unable to play against the West Indies bowling line up.They somehow managed to give them a target of 184 runs.But,this target was not enough especially in a final that too against West Indies .But the Indian Bowlers kept their bowling tight from the beginning itself.They kept taking wickets at regular intervals.Mohinder Amarnath bowled brilliantly and took 3 wickets at an economy rate of 1.71.India was able to restrict the West Indian side for 140 and hence,they lifted their first world cup trophy under the captaincy of Kapil Dev. 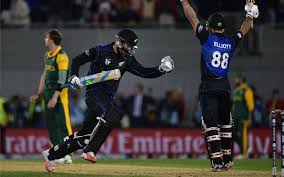 Both South Africa and New Zealand never a knockout game.In the ICC World Cup 2015,they both were facing each other in the semi-final.South Africa won the toss and chose to bat first.The match was interrupted by rain and hence,was reduced to 43 overs.Faf du Plessis scored 82 runs off 107 balls and gave South Africa the momentum.After his batting the South African skipper,AB de Villiers scored a brilliant 65 and David Miller scored a terrific 49 off just 18 deliveries.Due to such a brilliant batting the South Africans scored 281/5.The Kiwis were given a target of 298 due to D/L method.New Zealand’s skipper Brandon McCullum scored a brilliant fifty.there was brilliant partnership between Grant Elliot and Anderson as both scored a fifty each.After the wicket of Anderson it appeared that the match was under the control of South Africa. In the last over,New Zealand needed 12 runs off the last over.Dale Steyn was bowling,Grant Elliot hit a six and New Zealand entered the final in a sensational way.

The best free ways to gain Instagram followers in 2020