Elephant birds were believed to be the largest flightless birds ever to have lived on Earth. They measured about 10-foot-tall, 1,000-pound which lived on the islands of Madagascar, off the eastern coast of Africa which later were extinct in 17th or 18th century. 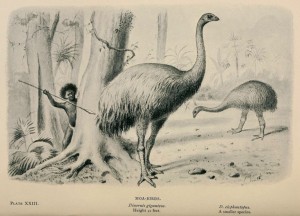