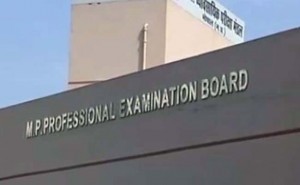 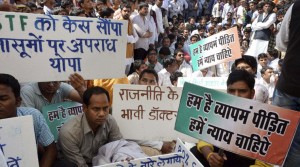 #1. Vyapam scam is all about the Madhya Pradesh Professional Examination Board (MPPEB) or MP Vyavsayik Pareeksha Mandal, abbreviated in Hindi as Vyapam. It started back in 2007.

#2. The scandal involves illicit recruitment of candidates for Pre-Engineering, Pre-Medical, Teaching and MCA professional courses. Chief accused are high-profile politicians and mafias. The prime accused in this case are Madhya Pradesh CM Shivraj Singh Chouhan, his wife Sadhna Singh and the then Governor Ram Naresh Yadav. Group of petitioners and people proclaiming accusations are AICC general secretary Digvijay Singh, Jyotiraditya Scindia and Kamal Nath, all of them belonging to the Opposition Congress. It also includes social activists and prominent media persons.

#3. The mastermind, rather kingpin of this scandal has been identified by the Enforcement Directorate as Jagdish Sagar. Another main accused is former State Education Minister Laxmikant Sharma and other 26 people. Apart from this a whopping 2000 candidates and parents have been found guilty for offering bribes or using illegitimate means to bypass the examination and receive desired posts. 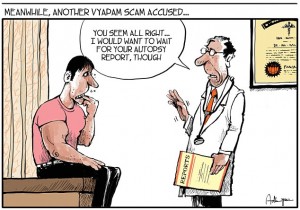 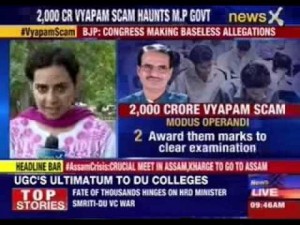 #5. Coincidentally, 45 death cases have been reported of people closely linked with either involvement or investigation of the Vyapam scandal. Some of those high-profile deaths are of:

Shailesh Yadav: The then governor Ram Naresh Yadav’s son Shailesh, who was accused for receiving bribes from candidates was found dead at his house in Lucknow.

D.K.Sakalley: He being the dean of Netaji Subhashchandra Bose Medical College of Jabalpur was on a medical leave, and under constant pressure from students who were alleged in this scam. He died after being killed using a Chinese Laser Gun, sustaining 90 per cent burns.

Akshay Singh: This Aaj Tak journalist was part of the news channel’s Special Investigation Team and died under baffling circumstances as he went on to interview a girl’s father whose name was involved in this multi-crore scam and had died recently, in Meghanagar.

Arun Sharma: Another dean, that of Jabalpur Medical College was found dead a day after Akshay Singh’s death. He was also involved in the SIT probe against Vyapam case. 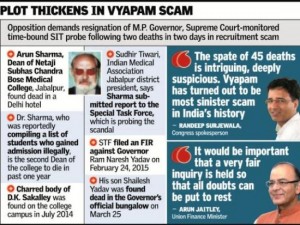 This massive recruitment fraud has once again proved the inefficiency in Indian transparency and the involvement of powerful politicians, bureaucrats, and middlemen has shown it’s wrath on the public. With a country of more than 1.2 billion, one-fourth of whom are starving, it is extremely unfortunate to witness such megalomaniac crimes. Under relentless pressure of the opposition, media and public, a CBI probe has been ordered into this ‘ghotala’, but only the coming days will decide how accountable the decisions and verdict would be. 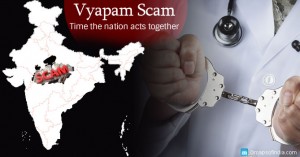