Let us think practically, what would you expect your father to present you on your birthday ? A latest phone or may be a latest bike. OK, let us say you are super rich then may be a costliest car. Hmmm well you should make your dad meet Mr. Joseph Lau from Hong Kong. This billionaire just presented her daughter with a 50 Million collar diamond which is claimed to be the worlds most costliest diamond. He has bagged it in an auction done at Switzerland and eventually he is the only one who has bid a high quotation. So let us have a quick round up of the diamond and auction.

The diamond Joseph Lau bought is the most costliest in this world so far. The vivid blue colored diamond is called as “Blue Moon” and it weighs a hefty 12.04 carats. The previous record was hold by one of the Chinese buyer who has bought a pink diamond for 46.2 million, Mr. Lau has broke the record with his purchase. The auction went on a very tough note that buyers competed with each other for getting the diamond. The auctioneers said “It was a tough fight but finally Lau has won the bid”. 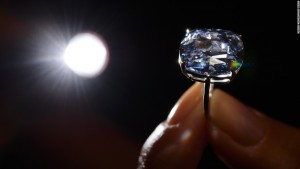 Presented to her daughter – A daughter by his Girl friend

Who is this Joseph Lau ?

Joseph Lau is the worlds 119th richest person in the world according to forbes magazine. This real estate investor has an assets worth 9.8 billion dollars. He has the tallest sky scraper in the Hong Kong and has named it as ONE after his girl friend. He is the most influential and powerful person in the Hong Kong city. He had invested in many prime companies of China and south Asian countries. He is a collector costly wines and art. He holds the record of buying the costly diamonds. He has bought a 7.03 carat diamond in 2009 for 13 million which is a record breaking price at that times. He has christened that as “Star of Josephine”. He also owns some rare arts in his gallery. Lau is the one of the top 20 richest in China and its territories.

Pink Star has to be the costliest diamond – Buyer defaulted payment